Whilst Ofcom is directly accountable to Parliament, our funding comes from fees charged out to the sectors we regulate.

We are committed to being a cost-conscious, value for money organisation in discharging our duties. Over the past 15 years, we have continued to deliver year on year, like-for-like real-terms budget reductions.

We are also a net contributor to HM Treasury; Ofcom collected £373.3m of fees and penalties in 2019/20, of which we retained £56.8m to fund our spectrum management and other relevant duties. The balance was passed to DCMS as our sponsor department, the UK Consolidated Fund, as well as the Department of Finance and Personnel - Northern Ireland (DFPNI) and to the Treasuries of the Isle of Man, the Bailiwick of Jersey and the Bailiwick of Guernsey.

Our responsibilities include the collection and transfer of licence fees collected under the Wireless Telegraphy Act 2006 (WTA), geographic telephone numbers, additional payments from broadcasting licensees and the levying of fines and penalties on stakeholders. 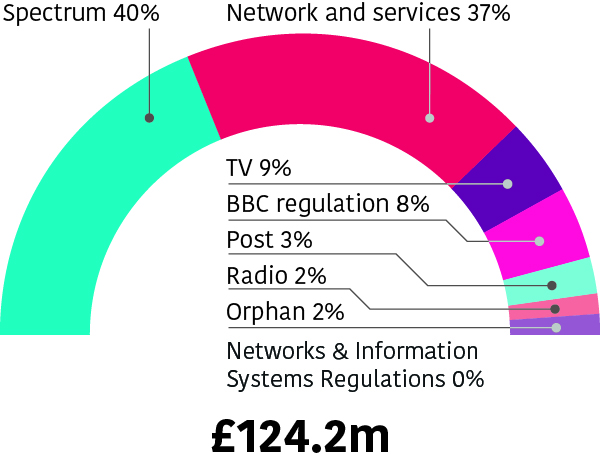 £373.3m of fees and payments collected under Section 400 of the Communications Act 2003

Almost 62% of our total cost base relates to staff costs, with a significant part of the remaining cost base fixed in relation to property and systems costs.

Ofcom present the costs relating to Spectrum Clearance separately to clearly differentiate from the core Ofcom operational activity. Further detail on this is set out on page 56.

The £125.0m (2018/19: £124.3m) of income received in 2019/20 covers Ofcom’s core responsibilities (excluding Spectrum Clearance). As part of this, we also received £0.7m of grant funding from Innovate UK under the Regulators Pioneer Fund, for innovative work on the use of blockchain for UK telephone number management.

The operating revenue required by Ofcom to fulfil its duties and deliver its programme of work for any financial year is calculated based on Ofcom’s statement of charging principles. This approach specifies the actual funds that need to be collected to discharge cash liabilities during the year. Any surplus funds arising as a consequence of budgetary savings achieved during the financial year are returned to stakeholders through a reduction in the annual tariffs raised in the two following financial years.

An accounting surplus is required to cover expenditure not reflected in the Statement of Comprehensive Net Income, including capital expenditure and deficit recovery payments necessary in respect of the two defined benefit pension plans.

An accounting deficit occurs where depreciation, amortisation and other non-cash transactions are greater than the income received to cover the cash costs of capital items and the defined benefit pension plans.

The accounting surplus for the financial year after tax, recorded in the Statement of Comprehensive Net Income for the year under review, was £226.7m (2018/19: £229.6m deficit). The significant variance to the prior year reflects the inclusion of the provision of £232m in the 2018/19 financial statements which was funded by DCMS and settled in this financial year. The large accounting surplus and deficit over the past two years are non-recurring events

All costs relating to Spectrum Clearance are reported separately from Ofcom’s core responsibilities in the financial statements.

Clearance of the 700 MHz band continues as a major programme of work for Ofcom. The band is being cleared to make the spectrum available for mobile data. The incumbent users of the 700MHz band, digital terrestrial television (DTT) and programme making and special events devices (PMSE), will move to alternative frequencies.

Government has made grant-in-aid funding available for the grant scheme to allow Ofcom to disburse grants to scheme participants.

More information on the programme is provided in annex 8.

A total of £312.8m was transferred to Government accounts in the financial year.

The 2020/21 budget has increased from the 2019/20 budget due to our new Video Sharing Platform (VSPs) regulatory duty and increased spend on both the Universal Service Obligation and Network Security and Resilience work areas. The 2020/21 budget is in line with the HM Treasury’s spending cap set for Ofcom.

The fees and charges will vary by sector as they reflect planned work for 2020/21, along with the variances between the 2019/20 budget and the actual final expenditure.

As shown in the figure below, except for costs associated with our new responsibilities to regulate the BBC from 3 April 2017, Ofcom’s 2020/21 tariffs for the various sectors (excluding the new VSP regulatory duty) are largely in line with the 5-year average. 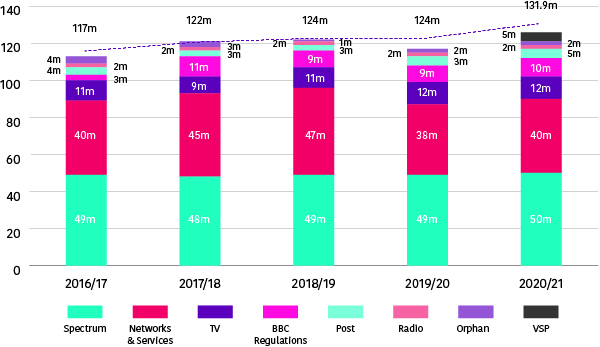 Colleagues who joined Ofcom from legacy regulators were entitled to retain membership of one of two defined benefit (DB) pension plans. Both plans are closed to new entrants and benefits accruals ceased on 31 May 2011. From this time, all existing members were provided with access to the Ofcom stakeholder plan. Notes 1(k) and 20 to the accounts provide further detail.

However, the 2019/20 financial statements show a surplus of £22.4m, in part because the pension liabilities under the financial statements are prepared on the basis that the liabilities are discounted in line with the yields on high-quality bonds which, under current market conditions, differ significantly from the approach used for determining Ofcom’s contributions. This also reflects the significant movements in financial markets since the date of the actuarial valuations.

Ofcom makes cash payments to the Ofcom Defined Benefit Plan and the Ofcom (Former ITC) pension plan on the basis of the actuarial valuations. Cash payments, rather than the amount charged to operating surplus as calculated under IAS19, are included in operating expenditure outturn used to calculate the tariffs charged to stakeholders each year.

As a consequence of the risk mitigation work between Ofcom and the Trustees and Actuaries of both pension plans, approximately 80% of the plans’ liabilities are now backed by annuities. As part of the ongoing activity to manage and mitigate risks of the plans, further insurance-backed benefit buy-ins in respect of pensioner members will be considered in the future.