People shopping for broadband deals must receive better information about speeds before they commit to a contract, under a range of new protections set out by Ofcom today.

Broadband is now an essential service for many households and companies, and speed is a vital factor when shopping around for the right deal. But there can be a mismatch between what broadband customers believe they are buying, and what they actually receive.

Ofcom is proposing to enhance its existing codes of practice, which require internet companies who have signed up to them to give customers an estimated range of speeds they are likely to receive, as well as the right to exit their contracts without being penalised if their speed falls below a minimum level.

To further benefit broadband customers, Ofcom is planning to:

Lindsey Fussell, Ofcom’s Consumer Group Director, said: “We want broadband shoppers to know what they’re buying, and what speeds to expect. So, we plan to close the gap between what’s advertised and what’s delivered, giving customers a fuller picture before they commit to a contract. We’re also making it easier to walk away from a contract, without penalty, when companies fail to provide the speeds they promise.”

Gillian Guy, Chief Executive of Citizens Advice, said: “Many people seek our help each year because their slow and intermittent broadband service falls short of what their contract promised. For most people, a reliable broadband connection is a necessity - so when they don't get what they’ve paid for they should always have a quick and easy way out of their contract. These changes are an important step in giving consumers more power to hold their broadband provider to account for poor service.”

Broadband speeds are not consistent throughout the day, often falling during busy periods when more people go online. This means ‘actual’ speeds can be lower than advertised ‘up to’ speeds.

Speed is one of the most important factors in choosing the right broadband deal. So, customers should be told before they buy a package what speed they are actually likely to experience at peak times. Peak times are defined as 8pm to 10pm for residential customers and 12pm to 2pm for business customers.

Internet providers would also have to give people a minimum, guaranteed speed at the point of sale – not just if requested and in after-sale information, which are already requirements. This will allow people to compare providers and shop around with confidence.

The codes currently enable customers to exit their contract without being penalised if speeds fall below a minimum guaranteed level, and their provider is unable improve it. Providers have an unlimited amount of time to resolve the problem before offering the right to exit.

We are proposing to give providers a maximum of one month to improve speeds before they must let customers walk away without penalty. This right to exit would apply, for the first time, to contracts with phone or pay-TV services bought by households alongside broadband. 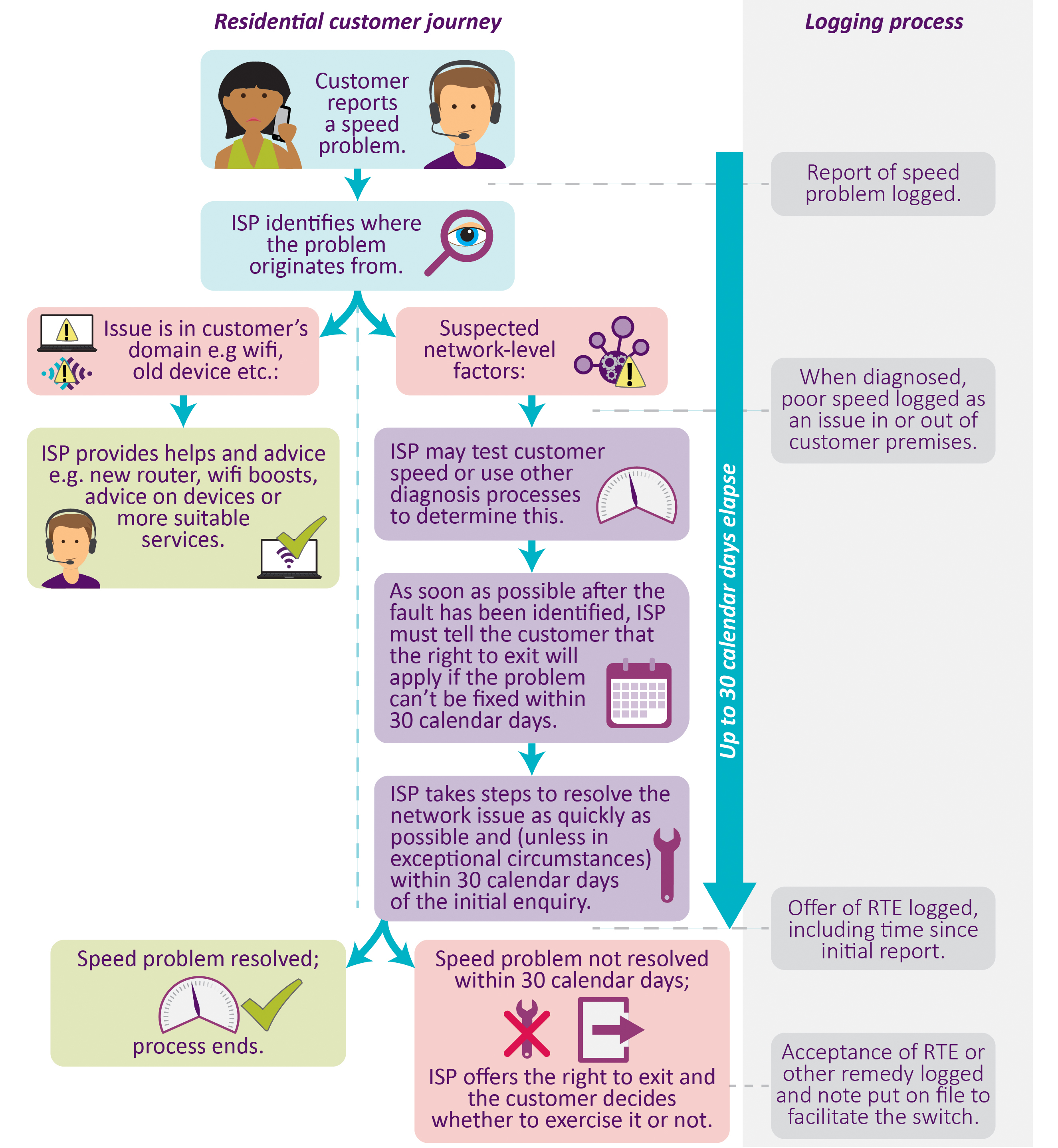 At present, the codes apply mostly to broadband over copper-based phone lines. This is because speed problems often arise when buildings connected by copper lie a long way from a local telephone exchange or street cabinet.

The proposed new codes require estimates that reflect speeds at busy times, which can be a particular issue on cable networks, such as the one operated by Virgin Media. So, in future, cable customers will also benefit from these protections.

Overall, Ofcom has found providers are complying adequately with the current residential code. Our mystery shopping research showed an increase in compliance since our last study.

But there is room to improve, and providers have set out measures they intend to take, such as reviewing staff training and looking at how to improve their website sales processes.

Wider work and next steps

Today’s plans are part of Ofcom’s work to deliver a step-change in service quality for broadband customers. This also includes automatic compensation when things go wrong, providing consumers with detailed information so they can shop around with confidence, and helping people secure the best deal for them.