Broadcasters must look beyond London and reach the whole UK

Ofcom is calling on the whole TV and radio industry to broaden the geographic and social make-up of its workforce.

Our annual study of diversity in the industry shows the social class and geographic background of TV and radio workers are poorly understood.

While broadcasters are collecting more information on the socio-economic background of their employees than a year ago, there remains no such information for around 60% of employees.

Audiences consistently say they expect to see programmes that authentically portray modern life across the UK. To achieve that, broadcasters need to reflect the whole society they serve.

So, we’re challenging broadcasters to improve how they measure and understand social class and geography across their workforce – including how these characteristics overlap and interact with others such as ethnicity and disability.

The door to the broadcast industry should be wide open to everyone, regardless of what part of the country you come from, or what school you went to.

We’re calling on major broadcasters to look beyond London and attract the best talent from a range of areas and backgrounds, so the programmes they make feel relevant to every part of society.

BBC can lead the way

As the UK’s national broadcaster, the BBC has an opportunity to lead the way on better representation.

Our annual report on the BBC, also published today, finds the BBC is generally serving viewers and listeners well through the breadth and quality of its programmes. It responded effectively and rapidly to the Covid-19 pandemic, for example, offering significant amounts of educational content to fill the gap when schools were closed, and increasing its news provision.

Despite falling year on year, the BBC’s overall reach remains very high, with almost nine in 10 adults consuming its content on a weekly basis. And a significant majority of adults have a positive overall impression of the BBC.

But some viewers and listeners continue to feel under-represented or inaccurately portrayed in BBC programmes. In particular: 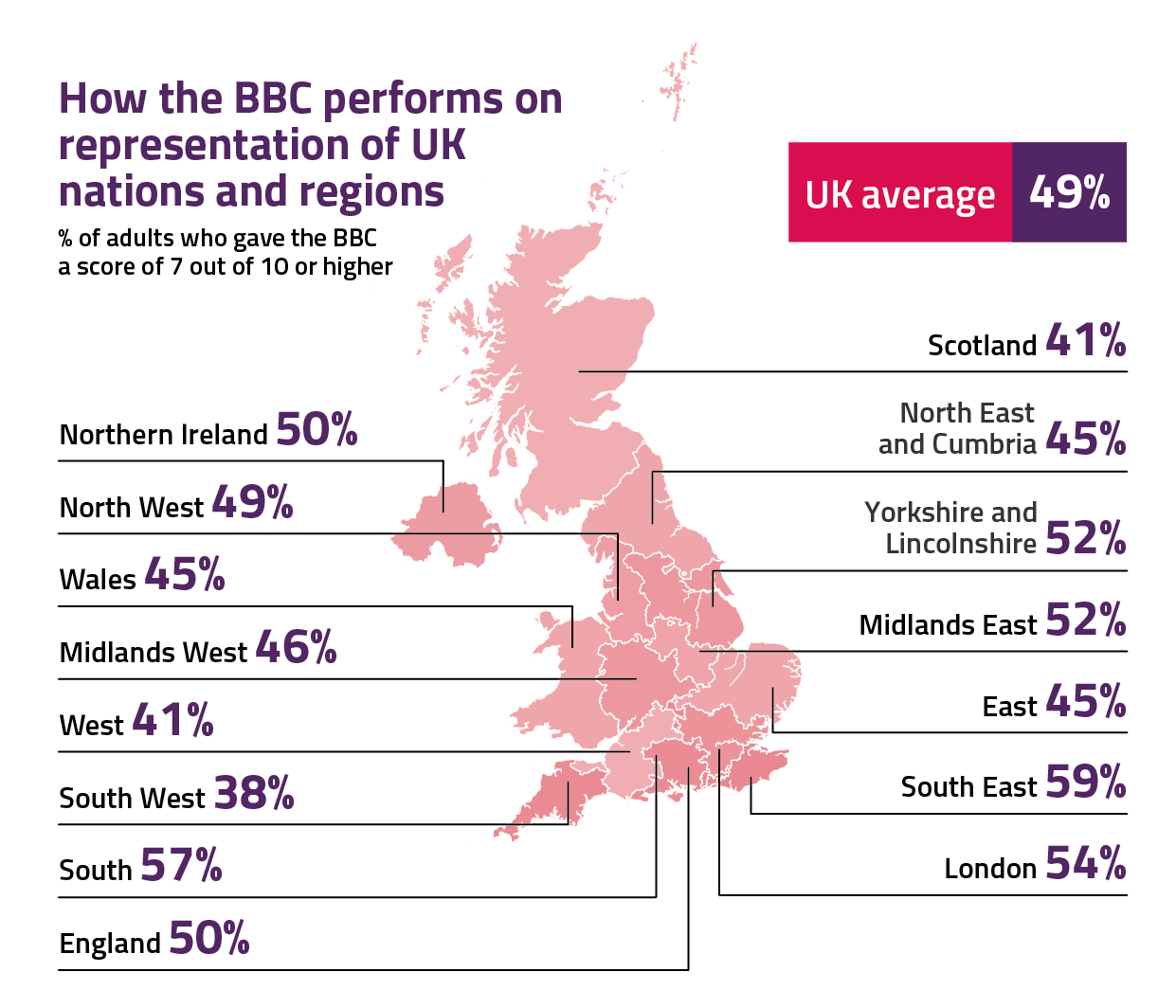 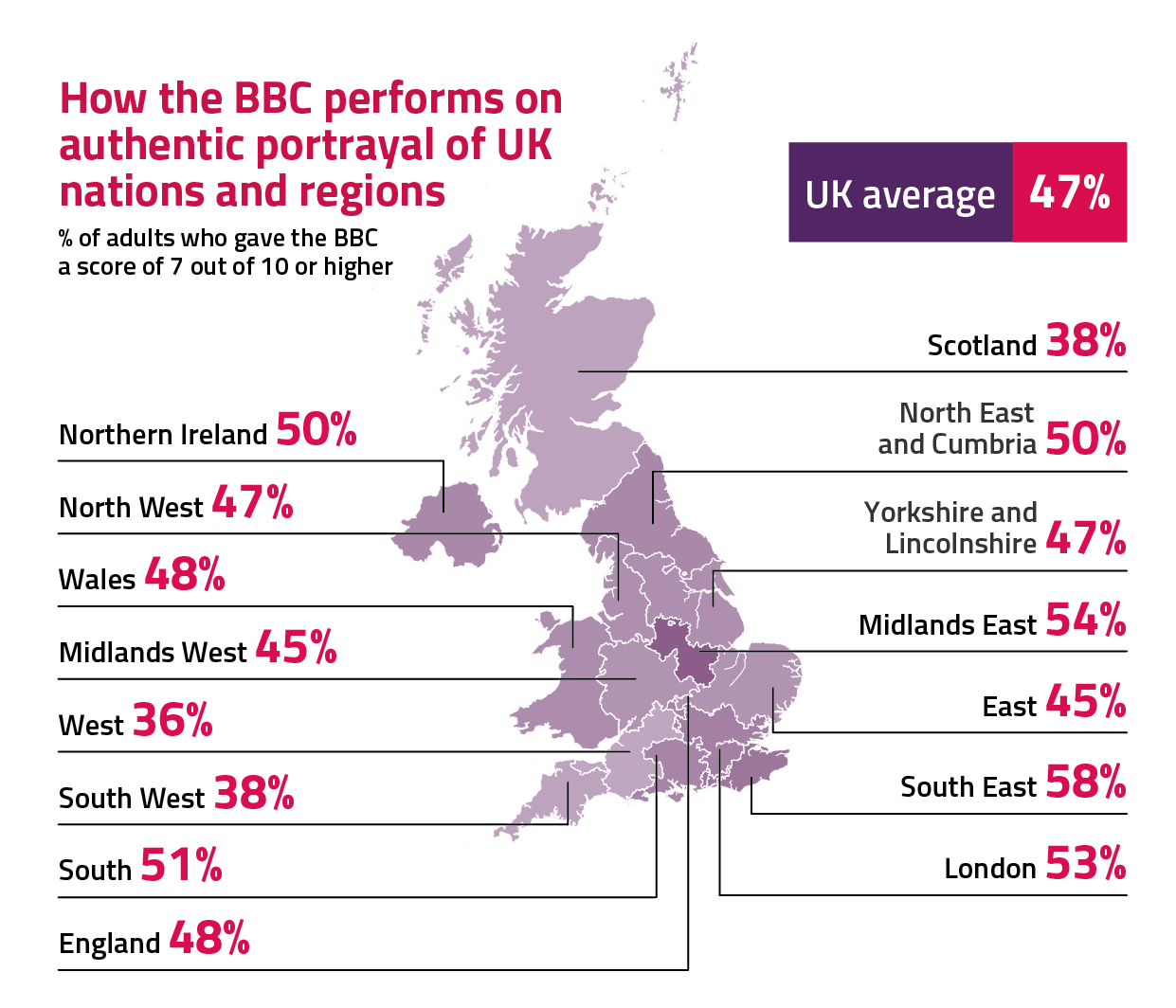 The new Director General, Tim Davie has acknowledged that the BBC does not serve all audiences equally and set out his broader priorities for change, which we welcome. We now encourage the BBC to set out detailed plans for delivering these priorities, including how it intends to better reach and reflect underserved audiences, and how it will measure its success.

Building on progress and accelerating change

2020 has seen a renewed commitment from senior leaders of the major broadcasters to transform the make-up of their organisations. And our reports show some progress.

A greater proportion of women and minority ethnic people are employed across the TV and radio industry than a year ago. The proportion of senior radio jobs held by women climbed from 36% to 43% year on year.

But progress is still too slow and some groups remain consistently under-represented. In particular:

We want to see faster progress in three priority areas – increasing the proportion of underrepresented groups in the industry; senior accountability for setting and delivering against diversity objectives; and better information and representation around social class and geography.

We will continue to use our position to influence change, including hosting a dedicated industry event next year to speed up progress. As an employer, we will act with the same transparency as the organisations we regulate. We will soon set out our own diversity roadmap for the coming years, to include new, stretching targets and plans for broadening the social class and geographic make-up of Ofcom.