Older children are getting wise to fake news

Older children are less trusting of news on social media than from other sources and use a range of measures to separate fact from fiction, Ofcom research has found.

More than half (54%) of 12- to 15-year-olds use social media platforms such as Facebook and Twitter, to access online news, making social media the second most popular source of news after television (62%).

The news children read through social media is provided by third-party websites. While some of these may be reputable news organisations, others may not.

But many children are wise to this. Just 32% of 12- to 15-year-olds who say social media is one of their top news sources believe news accessed through these sites is always, or mostly, reported truthfully, compared to 59% who say this about TV and 59% about radio.

Nearly three-quarters (73%) of online tweens are aware of the concept of ‘fake news’, and four in ten (39%) say they have seen a fake news story online or on social media.

The findings are from Ofcom’s Children and Parents Media Use and Attitudes Report 2017. This year, the report examines for the first time how children aged 12 to15 consume news and online content. 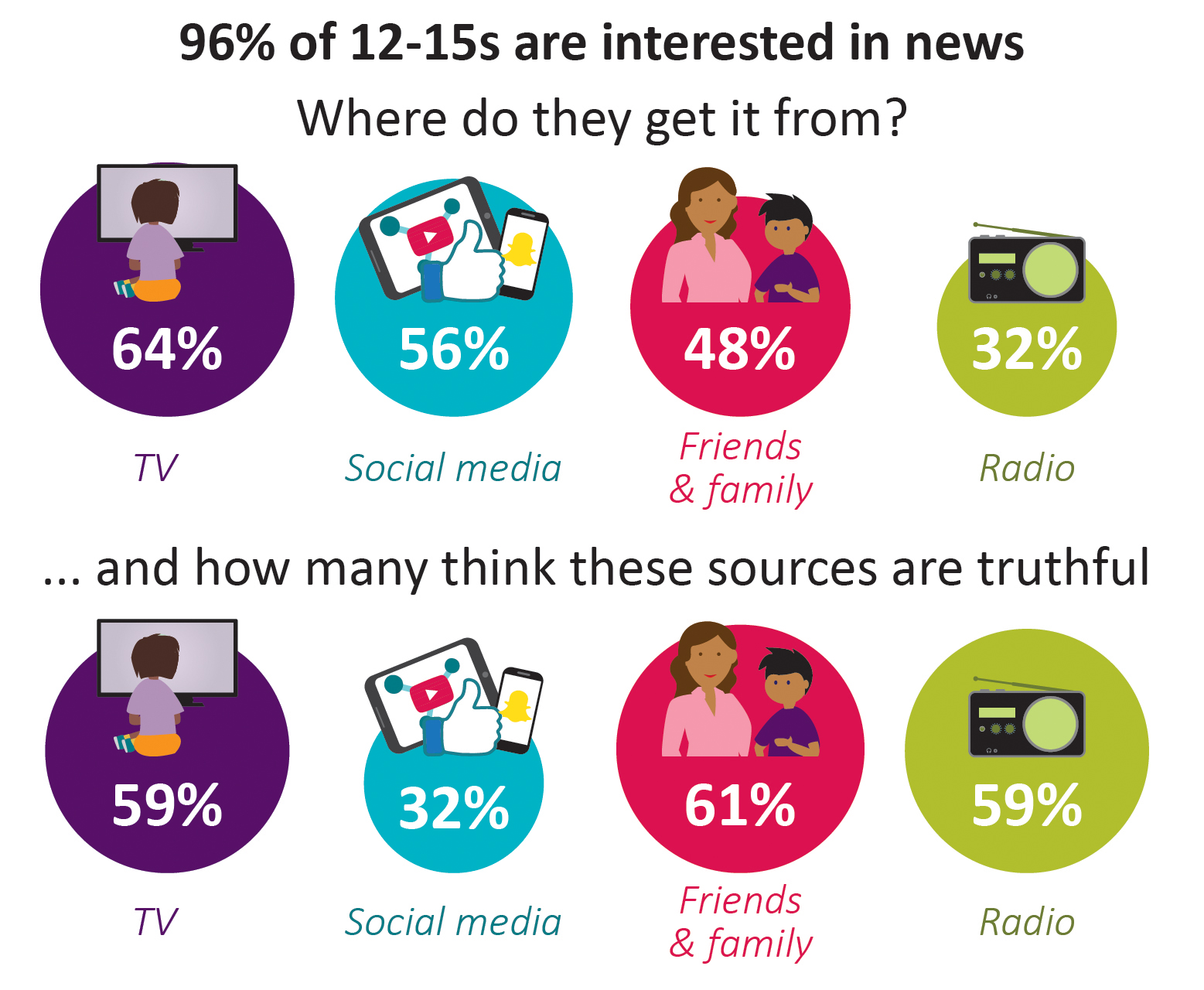 The vast majority of 12-15s who follow news on social media are questioning the content they see. Almost nine in ten (86%) say they would make at least one practical attempt to check whether a social media news story is true or false.

The main approaches older children say they would take include:

Some 63% of 12- to 15-year-olds who are aware of fake news are prepared to do something about it, with 35% saying they would tell their parents or another family member; 18% would leave a comment saying they thought the news story was fake; and 14% would report the content to the social media website directly. 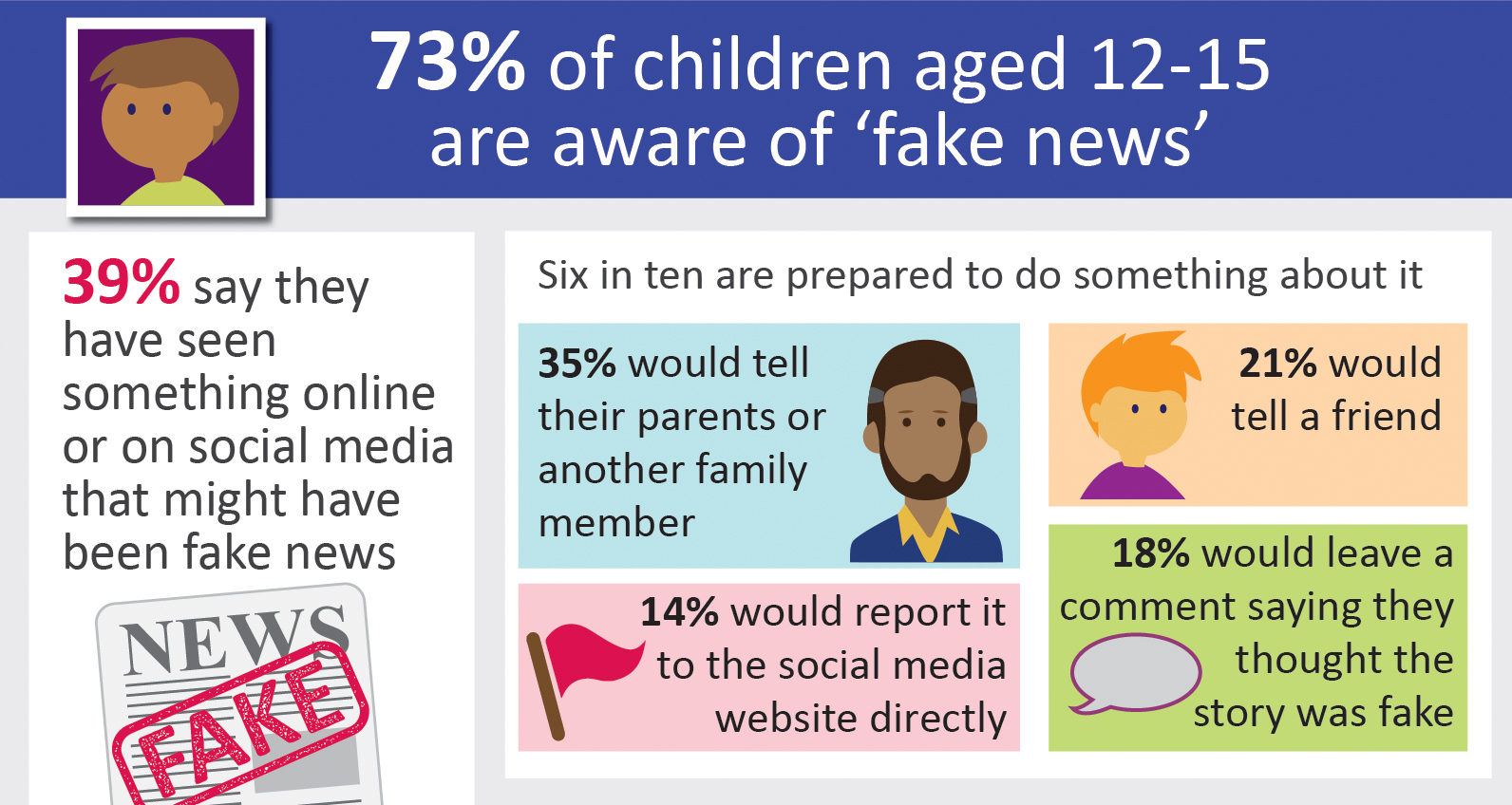 But some children still need help telling fact from fiction. Almost half (46%) of 12-15s who use social media for news say they find it difficult to tell whether a social media news story is true and 8% say they wouldn’t make any checks.

Emily Keaney, Head of Children’s Research at Ofcom, said: “Most older children now use social media to access news, so it’s vitally important they can take time to evaluate what they read, particularly as it isn’t always easy to tell fact from fiction.

“It’s reassuring that almost all children now say they have strategies for checking whether a social media news story is true or false. There may be two reasons behind this: lower trust in news shared through social media, but the digital generation are also becoming savvy online.”

Much of this growth is driven by the increased use of tablets.

Social media platforms are popular with younger children, even though most platforms require users to be aged 13 or over. More than a quarter (28%) of 10-year-olds have a social media profile, rising to around half of children aged 11 or 12 (46% and 51% respectively).

Aside from social media, one of the primary online destinations for children of all ages is YouTube, with eight in ten (81%) children aged 5 to 15 regularly using the site to watch short clips or programmes.

More than a third (37%) of children who saw this type of content took action. The most common response was to report it to the website in question (17%). Other steps included adding a counter-comment to say they thought it was wrong (13%), and blocking the person who shared or made the hateful comments (12%).

Find out more about protecting children when they’re online.

Today’s research shows that most 8- to 15-year-olds believe there are enough programmes on television for children their age, and that the content suitably reflects their lives

Building on this research, Ofcom has today launched a Review of Children’s Content. We will examine the range and quality of children’s programmes across TV broadcasters and content providers, and highlight any areas of concern.

Media lives by age: a snapshot