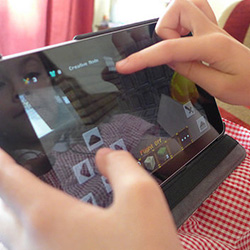 The internet has overtaken television as the top media pastime for the UK’s children.

Ofcom’s report on Children and Parents: Media Use and Attitudes, published today, reveals that children’s internet use has reached record highs, with youngsters aged 5-15 spending around 15 hours each week online – overtaking time spent watching a TV set for the first time.

Even pre-schoolers, aged 3-4, are spending eight hours and 18 minutes a week online, up an hour and a half from six hours 48 minutes in the last year.

According to Ofcom’s data, children aged 5-15 have increased their weekly online time by an hour and 18 minutes in the last year to 15 hours.

In contrast, children are spending less time watching a TV set, with their weekly viewing dropping from 14 hours 48 minutes in 2015 to 13 hours 36 minutes in the last year.

YouTube is one of the most popular online destinations for children to watch content, with around three quarters (73%) of those aged 5-15 using the video site. It is also a hit with pre-schoolers with 37% regularly watching YouTube videos, who typically pick ‘TV content’ such as cartoons and mini-movies.

And older children are beginning to show a preference for YouTube with four in ten 8-11s and 12-15s saying they prefer watching YouTube than the TV set.

Despite this, Ofcom’s research shows that TV still plays an important role in children’s lives with nine in 10 still watching, generally every day, and the largest number of children watching at peak family viewing time, 6 – 9pm.

Digital devices are more widespread among children than ever, including the very young. Today’s research finds that a third (34%) of pre-schoolers (aged 3-4) own their own media device – such as a tablet or games console.

Pre-schoolers typically enjoy digital entertainment on a tablet, with more than half (55%) using one, and 16% owning their own tablet – up from just 3% in 2013.

As children reach pre-to-early teenage years, they prefer smartphones to tablets – with the proportion of children owning one up from 35% to 41% in the last year. This means one in three tweens (8-11s), and eight in 10 older children (12-15s) now have their own smartphone.

As children spend more of their time online, their awareness of advertising and ‘vlogger’ endorsements has also increased with more than half of internet users aged 12-15 (55%) now aware that online advertising can be personalised - up 10 percentage points in the last year. And, 12-15s awareness of product endorsement from vloggers has also increased by 10 percentage points to 57% in 2016.

But, many children still need help to identify advertising on search engine Google with only a minority of 8-11s (24%) and 12-15s (38%) correctly recognising sponsored links.

And, many families still enjoy a traditional bedtime routine, with one in five (21%) children aged 6-11 reading at 7.45pm – the highest peak for reading during the day.

More than nine in ten children aged 8-15 have had conversations with parents or teachers about being safe online, and would tell someone if they saw something they found worrying or nasty.

Parents of older children are most likely to be having these types of conversations with their children, with 92% of parents of 12-15s saying they have spoken to their child about online safety, an increase of six percentage points since 2015.

Nearly all parents (96%) of 5-15s manage their children’s internet use in some way – through technical tools, talking to or supervising their child, or setting rules about access to the internet and online behaviour. Two in five parents use all four approaches.

And, parents of children aged 5-15s are more likely to use network level filters in 2016 - up five percentage points to 31%.

On the most part, families are in agreement that their child has a good balance between screen time and doing other activities. Most children aged 12-15 (64%), and parents of children of the same age (65%), believe this balance is about right.

Jane Rumble, Ofcom Director of Market Intelligence said: “Children’s lives are increasingly digital, with tablets and smartphones commanding more attention than ever. Even so, families are finding time for more traditional activities, such as watching TV together or reading a bedtime story.”

Children and their media 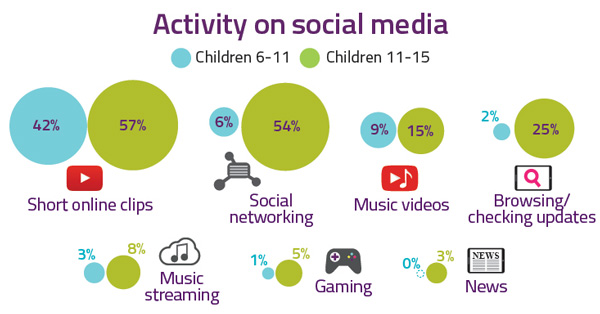