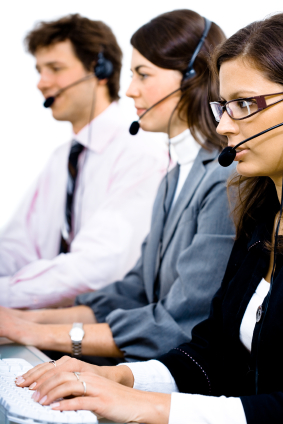 Levels of satisfaction with the customer service of landline, broadband, mobile and pay TV providers are today reported in new Ofcom research.

Over 6,000 consumers were interviewed as part of the research. Of those, 3,402 who had contacted their provider between July and September 2014 were asked to rate their customer service experience.

Various aspects of the providers’ customer service were scored including: the speed with which issues were dealt with; the standard of advice given; and the attitude and ability of the advisor.

Overall customer service satisfaction is highest in the pay-TV market where it has now reached 80% - an increase of 14 percentage points since Ofcom began monitoring customer service performance in 2009.

Satisfaction among customers with a pay-TV complaint has increased to 68% in 2014, up 19 percentage points since 2011.

Levels of overall satisfaction are lower for both landline and broadband than for pay TV, with two-thirds of customers (67% and 69% respectively) rating the customer service as satisfactory.

Mobile customer service satisfaction - at 73% - remains broadly similar to previous years. However, satisfaction among those customers with a complaint has increased by 13 percentage points since 2011, to 59%.

The mobile sector also recorded a significantly lower customer contact rate of 19% in 2014 compared with 27% in 2013.

Ofcom monitors satisfaction with customer service as part of its wider statutory responsibilities. This feeds into a broader objective of ensuring that consumers have access to reliable, accurate and up-to-date information when choosing a service or provider.

This programme of work also includes publication of complaints data and research on broadband speeds.

Claudio Pollack, Ofcom’s Consumer and Content Group Director, said: 'When a customer needs to contact their communications provider, it’s important that they find the process as quick and easy as possible.

'Our research gives consumers valuable information about the standards of customer service across different sectors. As well as being a useful point of reference for consumers who may be choosing a new service or provider, we hope this research will provide an industry benchmark and act as an incentive for providers to continue aiming for the highest standards of customer service.'

The main reasons customers contacted their landline provider were to discuss changes to their package or service (12% of contacts), or to report poor line quality (9% of contacts).

Sky is the only landline provider to have increased its overall customer service satisfaction score since 2013 (up 10 percentage points). It is now significantly higher than the sector average (79% versus 67%).

In particular, the level of satisfaction with Sky advisors calling back as promised saw significant year on year improvement (48% to 59%), with above average satisfaction reported across all aspects of customer service.

Virgin Media performed above the sector average on advisors being able to understand customer issues and identify problems (73% versus 64% average), and advisors doing what they said they would do (72% versus 64%).

TalkTalk performed below average on advisors being able to understand customer issues and identify problems (52% versus 64% average), and with the logging of query details (46% versus 55%).

Levels of overall satisfaction for customer service with BT, Talk Talk and Virgin Media are in line with the sector average in 2014. None of these providers’ overall scores significantly increased from 2013.

Connection speed was the main reason for broadband customers contacting customer services (19% of contacts), followed by discussing changes to their package or service (12% of contacts).

Virgin Media achieved an overall satisfaction score of 76%. This has risen 16 percentage points since monitoring began in 2009 and is significantly higher than the sector average for 2014 (69%).

Satisfaction with the general attitude and ability of Virgin Media advisors was significantly above average.

Sky customers also reported above average satisfaction with some aspects relating to customer service advisors, and also the offer of compensation or goodwill payment (41% versus 32%).

BT’s overall satisfaction score (60%) was significantly lower than average. They also performed below average on specific customer service measures including speed and ease of getting through to the right person, time taken to handle issues and offering compensation or a goodwill payment.

TalkTalk’s satisfaction scores remained broadly unchanged, but scored lower than the sector average in relation to certain measures, including the usefulness of the advice given and aspects relating to advisors.

The key reason consumers gave for contacting their mobile provider was to discuss changes to their package or service (18% of contacts), followed by reporting poor reception or coverage (9% of contacts).

O2 achieved an overall satisfaction score of 78% and were rated as above average on a number of specific customer service measures. These included ease of making contact, usefulness of information, the effective logging of query details and keeping the customer informed.

Compared with 2013, Vodafone reported significantly lower satisfaction for calling customers back as promised, the speed of answering phones, the usefulness of the information and advice given, and the effective logging of query details.

This is the first year that satisfaction data from EE, Orange and T-Mobile for 2014 is combined and presented as EE following integration of the customer service functions and processes.

Overall customer service satisfaction scores for 3/Three, EE, O2, Virgin Mobile and Vodafone are all in line with the 2014 sector average and none of these providers’ overall scores significantly increased from 2013 (where comparable).

The main reason for consumers contacting pay-TV providers was to discuss changes to their package or service (23%). There was also a significant increase in the proportion of contacts from consumers relating to higher bills than they’d expected (5% in 2013 to 9% in 2014).

Both Sky and Virgin Media had overall satisfaction levels in line with the sector average.
Neither of these providers’ overall scores significantly increased from 2013.

The full research can be found here.