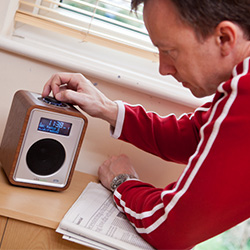 On 29 February 2016, the UK's second national digital radio multiplex will be switched on, paving the way for DAB listeners to receive even more choice of stations. DAB (Digital Audio Broadcasting) is the format used by digital radio sets to receive stations.

Listeners will be able to enjoy 18 national DAB stations, all licensed by Ofcom, and launching from 29 February onwards:

To help consumers access the full range of available stations, Ofcom is joining a nationwide campaign to encourage listeners to retune their DAB radio.

Most digital radios can be retuned in a minute

Press the Autotune, AutoScan or Scan button on your DAB digital radio. It usually takes no more than a minute for your radio to update the station list.

This launch follows the award of a second national DAB multiplex licence by Ofcom to Sound Digital, a consortium of Arqiva, Bauer and UTV Media GB, in March last year.

Digital Radio in the UK

Ofcom has also announced its intention to extend the small-scale DAB trial for a further two years.

Small-scale DAB is an innovative technology that makes use of software freely available from the website opendigitalradio.org, rather than relying on often expensive hardware equipment.

As well as increasing the capacity for national digital radio, Ofcom is supporting the Local DAB Expansion plan, which will bring local DAB radio services from commercial broadcasters and the BBC to even more UK homes.

According to Ofcom's latest digital radio report published in November last year, nearly all households are able to receive digital radio services. Ninety-six per cent of households have televisions which give them the ability to listen to digital radio, compared to 80% through their broadband connection, and over half have a DAB radio set.

The number of new cars fitted with digital radio has almost trebled in the past three years, and nearly three quarters of new cars now come with DAB as standard - up from 25.5% in 2012. Three in ten drivers have a digital radio in their vehicle.