Broadcasters need to improve the diversity of their employees, Ofcom said today, as a major study of diversity in television finds that women, ethnic-minority groups and disabled people are all under-represented in the industry.

Ofcom’s report, Diversity and equal opportunities in television, uncovers the scale and nature of the diversity challenge facing the TV industry, with a focus on the main five broadcasters – the BBC, Channel 4, ITV, Sky and Viacom (owner of Channel 5).

Broadcasters need to widen the range of talent working on and off screen. Too many people from minority groups struggle to get into television, creating a cultural disconnect between the people who make programmes and the millions who watch them.

The report finds that many broadcasters urgently need to undertake better, more regular monitoring of the make-up of their employees. Though most provided Ofcom with information on employees’ gender, the television industry could offer ethnicity data for only 81% of its workers, and disability figures for just 69%.

How the five main broadcasters compare

Sharon White, Ofcom Chief Executive, said: “Television is central to the UK’s cultural landscape, society and creative economy, and we believe that creativity in broadcasting thrives on diversity of thinking. Today’s report paints a worrying picture, with many broadcasters failing properly to monitor the make-up of their employees. We’re announcing a range of measures to help close the gap between the people making programmes, and the many millions who watch them.”

While some broadcasters are already taking action (PDF, 514.9 KB) to improve diversity, a step-change across industry is required, with action needed by broadcasters.

First, broadcasters should regularly measure and monitor the make-up of their workforce to a consistently high standard, capturing every relevant protected characteristic under the Equality Act, and all main job levels and functions.

Second, Ofcom expects broadcasters to set clear diversity targets so their employees more accurately reflect the society we live in.

Third, diversity transformation should be led from the top. We want chief executives to be accountable for delivery against their diversity targets.

As the UK’s largest broadcaster, the BBC’s position on diversity is likely to have a disproportionate effect on the wider industry. The BBC should be leading the way, but today’s report shows its performance on most charactersitics is behind that of Channel 4.

Ofcom has today announced a range of measures to supplement industry action on diversity. They are:

Further develop our monitoring programme. Today’s report is the first in a series of annual publications measuring the diversity of the TV industry, identifying which broadcasters are improving and which have more to do. We will work with broadcasters to help them to improve the quality and comparability of their data, and explore what new information can be provided to assess the social class of people in broadcasting.

Seeking additional powers. We have written to the Secretary of State for Digital, Culture, Media and Sport, to allow us to require broadcasters to provide data on a broader range of characteristics, rather than sections being voluntary, and require their equal opportunities arrangements to cover these characteristics.

Read the report: Diversity and equal opportunities in television

This table shows how the main five broadcasters compare: 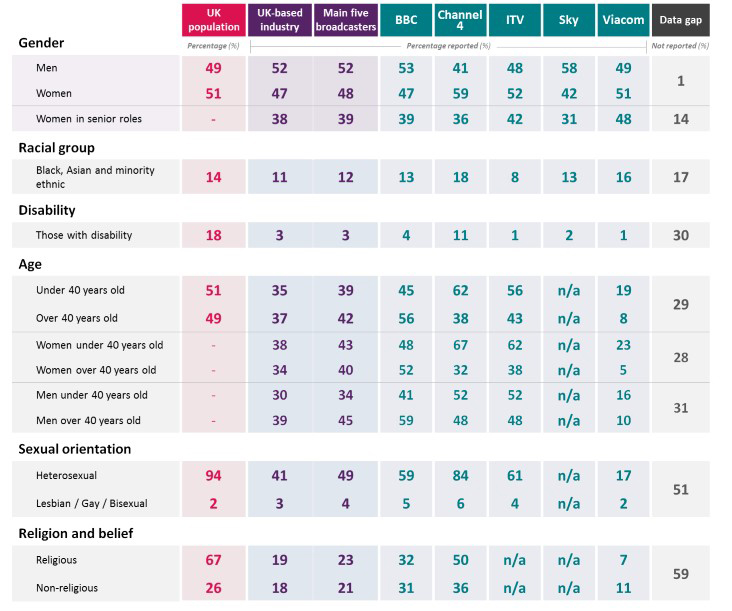