Amateur radio, also known as ham radio, is a hobby and volunteer service used by 75,000 people in the UK, and millions around the world. Licensed ham radio operators use a unique callsign, allocated by Ofcom, to identify themselves and talk to other amateurs on the air.

This week the Radio Society for Great Britain (RSGB), the UK’s national membership organisation for the hobby, announced that the 1,000th online amateur radio exam was completed, signalling its growth in popularity during lockdown.

In April, the RSGB relaxed the examination process to help budding amateurs of all levels to get on the air at a time when keeping in touch with friends and family has become more important than ever.

Two such enthusiasts are Michael, a train driver and keen radio amateur, and his ten-year-old son William, from Thornton-Cleveleys in Lancashire. Michael sent us a tweet to share the news that his son had recently passed his foundation exam, making him one of the youngest radio amateurs in the UK.

My 10 year old son passed his Foundation Exam yesterday. Thank you for all the hard work your teams put in to allow people access to the hobby. 73 2E0MKH

We caught up with the duo to find out what they've been up to on the airwaves during lockdown, what they’re looking forward to when things get back to ‘normal’, and William’s hopes to inspire more people to have a chat on the air. 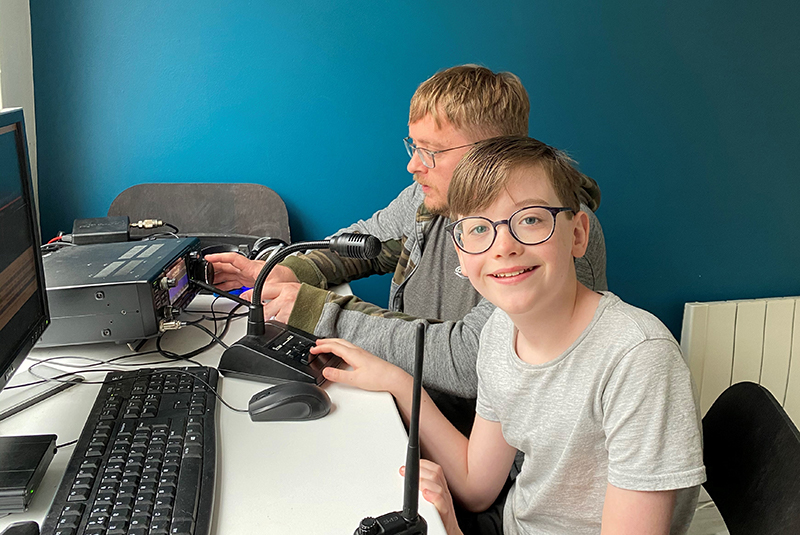 How did you get into amateur radio?

Michael: “I started in 2016 when I was looking for something to do that wasn’t as stressful as work – I’ve always been interested in CB (citizen’s band) radio and I know people who do amateur radio. So, I went along with them to my local amateur radio society and got into it that way. The aim is to get my full licence – if can find the time to study!”

William: “I’ve seen my Dad doing it over the past four years, and thought, ‘Oh, that seems interesting…’ but never quite understood what it was. So, I wanted to learn about it and do something during lockdown instead of just sitting there bored, as I’ve not been able to see my friends.”

Now that you’ve opened the door to the world of amateur radio, what are you most looking forward to doing with your new skills?

Do you think you’d like to work with radio, or pursue a career in a similar field when you’re older?

William: “When I’m older I’d probably like to do something in technology. Science is my favourite subject in school; I like physics and space, learning about the solar system and stars.”

While William has been gaining his new amateur radio skills, is there anything new you’ve learnt during lockdown?

Michael: “I’ve learnt a lot about coming up with different ways of explaining things – not a lot of the radio terminology is easy to understand – explaining words like ‘ionosphere’, how to do the ‘power triangle’, and Ohms law, for example. I’ve had to learn how to explain things to William in a way he can understand it and come up with different ways of remembering things. I’ve definitely re-learned some things as well – it’s very different to driving trains!”

How have you seen the hobby change and develop since you’ve been taking part in it?

Michael: “There’s been a big increase in the number of people using ‘digital modes’, for example FT8 [a radio frequency] and other computer generated signals. There’s a lot more of that and a bit less talking.

“Technology has moved on very quickly; it’s come quite a long way, and equipment has moved with that towards software-defined radios, instead of it being transistors and that sort of thing. The signals are actually being decoded by software, and that gives you a clearer signal and a better experience all round.”

How about changes you’ve observed during the pandemic?

Michael: “I’ve definitely heard and spoken to a lot more people using it. The RSGB encouraged people to join their ‘Hope QSO’ contest [to help support radio amateurs who are at home and isolated], and I took part in the first one. But at the same time, I have been still talking to the same people.”

Michael: “I think especially with lockdown, and a lot of people wary about going out, it’s been a way of people keeping in touch. The older radio amateurs definitely outnumber the younger people, so it’s been a good way for them to keep in touch and just let people know that they’re alright.”

What does amateur radio mean to you?

Michael: “For me, it’s a bit more than a hobby. I’ve put a lot of time and effort into the north west fusion group and Facebook community I’m a part of, and that’s something we’re really trying to work with, to get more people using amateur radio.

“There are hundreds of licenced radio people in Lancashire. In club meetings people will talk about what they’ve heard, but it’s very daunting to actually pick it up and speak. So, my hope is that if people hear William on the air that’ll sort of give them the confidence to do it themselves.”

William: “I haven’t spoken to anyone my age yet. But I’m hoping that I can help more people to speak up – I hope if they hear me, they might think, ‘If a ten-year-old can do it, I can do it!’”

Michael: “It’s been a brilliant way of keeping in touch when people can’t go out – as there’s a lot of older people using amateur radio – it’s been a lifeline.”

When lockdown is over, what are you looking forward to?

Both: “We’re really looking forward to going out and getting back to the Lake District – doing some of the Wainwrights on the air and going out with the big mast on the van, doing some portable stuff and having fun. It’s going to be nice doing the radio stuff together – that’s one of the big things

we’re looking forward to. William getting his foundation licence has definitely been a great bonding experience through all of this.”

At the request of Michael and William: if you’re on the air and hear William’s callsign, M7WHB, please do make sure to say hello!

Steve Thomas, general manager at the RSGB said: “We’ve seen a huge increase in interest in amateur radio during the last three months. We worked with the media through our ‘Get on the air to care’ joint campaign with the NHS to highlight amateur radio to those who might not have been aware of it, and to remind those who might want to return to it.

“By offering our remote-invigilation exams, we have been able to welcome newcomers throughout the pandemic restrictions and that has been incredibly successful. The campaign has also encouraged radio amateurs not only to try new aspects of amateur radio but also to keep in touch with other radio amateurs locally and across the world. We are really pleased to see so many new people joining amateur radio and look forward to supporting them as they use and experiment with wireless communications in the future.” If you’d like to try your hand at ham radio, the RSGB website has a wealth of dedicated resources to help you get started.