Audio on demand: the rise of podcasts

Around 7.1 million people in the UK now listen to podcasts each week. That’s one in eight people and is an increase of 24% over the past year – and more than double over the past five years. Ofcom research also found that half of listeners have joined the podcast wave in the last two years.

Three quarters of people surveyed for our Media Nations 2019 report said they’d listened to a podcast of a BBC radio programme, the highest of any type of podcast. And BBC iPlayer radio was cited as the most popular audio-only service for accessing podcasts across all age groups.

Ofcom also collected data from a range of sources, including RAJAR, Chartable and the BBC, to explore the continued rise in podcast listening. Findings include: 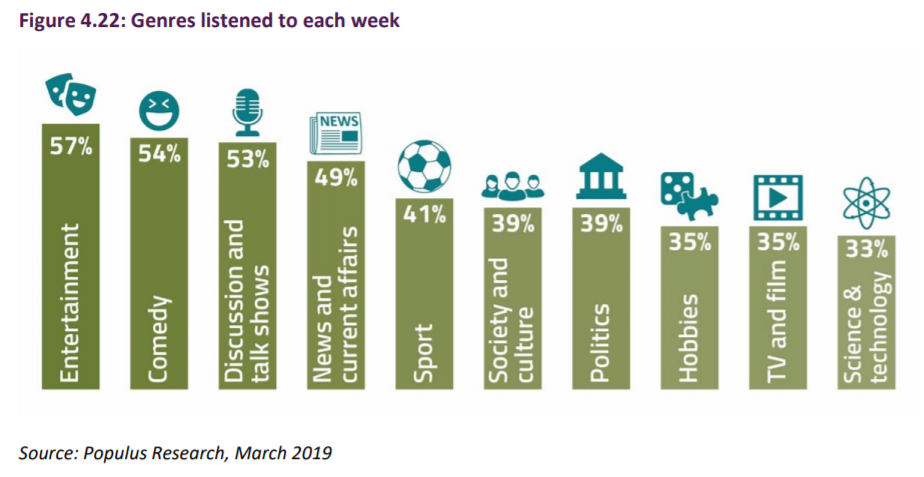 Around nine in ten people in the UK continue to listen to live radio every week, and many are combining this with listening to podcasts. More than a third (37%) of podcast listeners say they have listened to a radio programme for the first time because of listening to a podcast.

Despite podcasts being primarily considered an audio format, YouTube was the most commonly used service among those who listen to podcasts weekly. The only group to buck this trend was the 55+ category, among whom BBC services such as BBC iPlayer Radio or BBC Sounds were the most popular way to listen.

For 18-54s, YouTube was the most popular service for accessing podcasts, and video podcasts on the platform are particularly popular with people aged 35-54. Among younger, regular listeners, podcasts with videos are the most popular choice, followed closely by BBC podcasts.

Podcasts are transforming the ways people listen to audio content, just as on-demand video is changing how people watch television. It's fantastic to see how UK radio broadcasters as well as newspapers and other media companies are embracing podcasting and offering more choice about what we listen to than we’ve ever had before. Ian Macrae, Ofcom's Director of Market Intelligence