A small-scale revolution for local radio

Thousands of listeners across the UK will be able to enjoy a richer and wider range of radio programming thanks to an innovative new technology called small-scale DAB.

Pioneered by an Ofcom spectrum planner, small-scale DAB provides a low-cost way for local commercial, community and specialist music services to take to the digital airwaves. 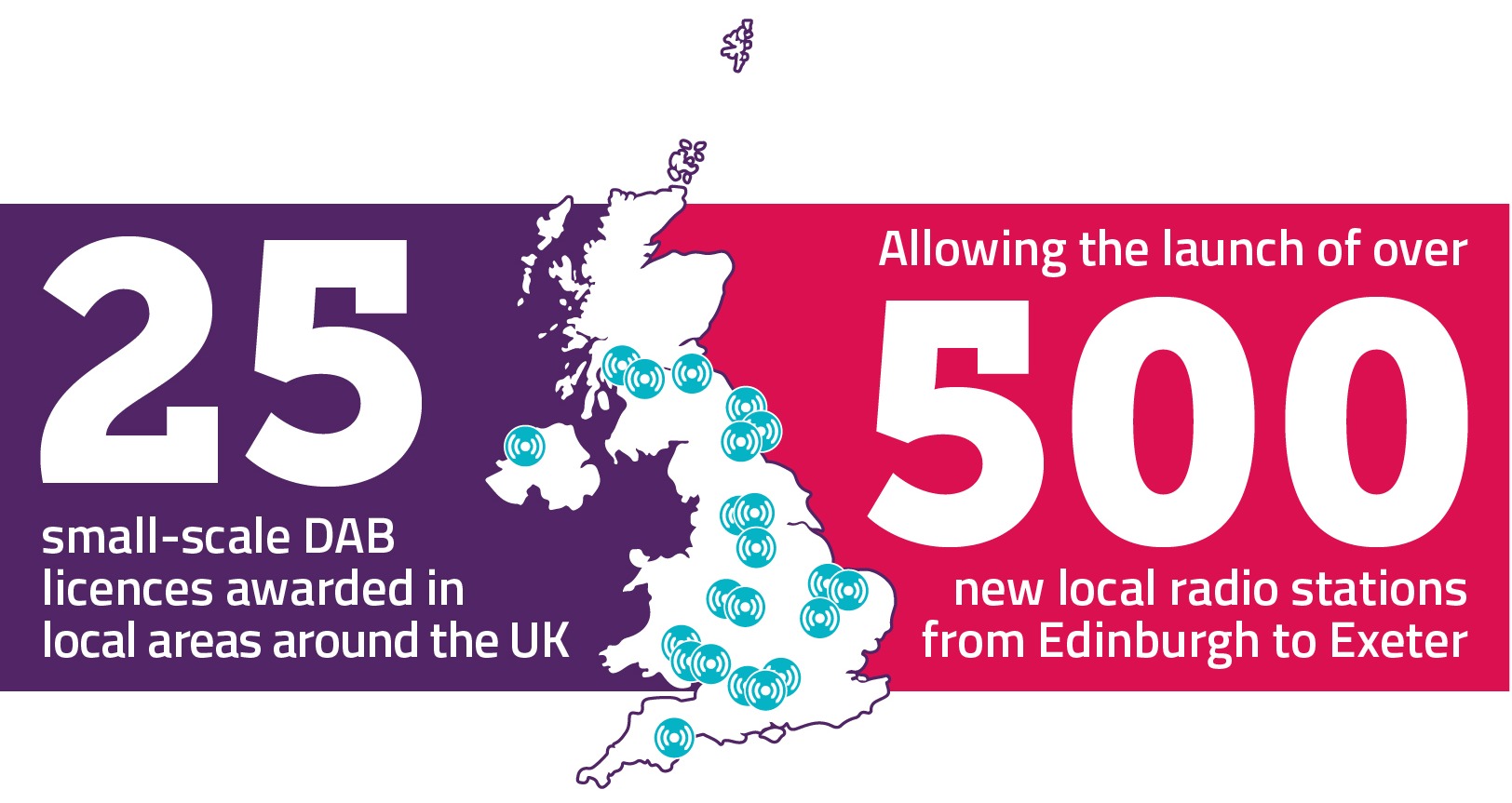 Since February, Ofcom has planned the airwaves and awarded small-scale DAB licences in 25 areas across the UK. With the first round of awards now complete, these licences have the potential to allow the launch of over 500 new local radio stations

Some of the hundreds of new stations set to launch on small-scale DAB are existing analogue community and small commercial radio services. Many others will be completely new – ranging from grass-roots community services to boutique specialist music stations, and services aimed at minority groups and other under-served audiences.

We will award further small-scale DAB licences in the North West of England and North East Wales later this year.

The rollout of this innovative technology will give listeners across the UK an unprecedented choice of locally produced content – serving communities and audiences across the country in a way never seen before. The UK’s commercial and community radio industry continues to go from strength.

Find out about some of the new stations… 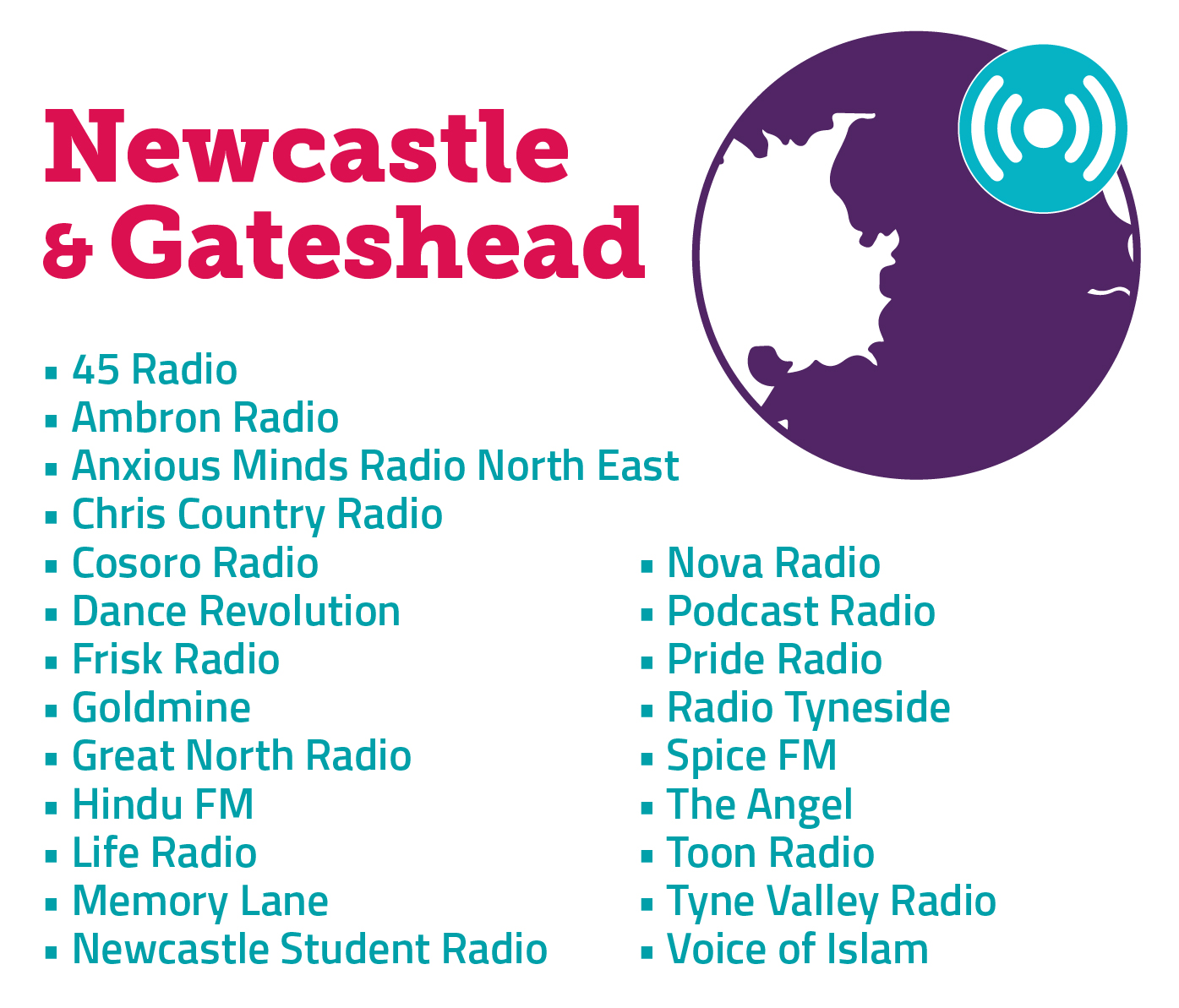 In Newcastle and Gateshead, Tyneside Community Digital (TCD) will provide four local analogue community radio stations (Radio Tyneside, Nova Radio, LGBQ station Pride FM, and Asian service Spice FM) all of which will be able to broadcast via DAB for the first time.

Richard Finch, one of TCD’s directors said: “Our application had been over a year’s hard work which involved existing FM community radio stations and a whole batch of new channels - most of which are in our locality. DAB radio has been embraced by listeners and it’s now the biggest platform that people tune to.”

“The service isn’t just about channels that already exist - we will be bringing new services to air including country music, podcasts, dance music and nostalgia. Most of these stations have never been on broadcast radio on Tyneside before.” Chair of Shefcast Digital, Steve Buckley, said: “Small-scale DAB in Sheffield and Rotherham will increase listener choice, respond to local interests and bring a range and diversity of new local, community and specialist services. For the many loyal listeners to our FM community radio stations it will also mean their favourite channel is finally available on DAB.”

Sangita Basudev, Chief Executive of Sheffield Live!, added: “Since we started as the first licensed community radio station in Sheffield we have always supported the aspirations of others to develop the local and community radio landscape. Through our social enterprise support scheme we are now working with local internet radio stations such as Rother Radio and Gumbo FM to bring them onto DAB, as well as creating some new services of our own.” In Dudley & Stourbridge, a small-scale multiplex has been awarded to local company, DigiMux. Planned services include Radio India Dudley; Gorgeous FM, an LGBT+ station for Birmingham and the Black Country;  and the chill-out station Skylab Radio.

DigiMux technical director, Nigel Ball, said: “The small-scale Dudley & Stourbridge licence will allow stations that are currently online only to broadcast terrestrially for the first time.”

Dave Brownhill, a director of Waterfront Media, which runs the local community radio station Black Country Radio said “We are delighted that DigiMux Ltd have been granted this licence by Ofcom. As a partner in this initiative, it means that Black Country Radio, alongside our new offering Black Country Xtra, will be available on DAB across the Black Country in the coming months.”