Over three days we’re bringing together senior leaders, experts and policy-makers from the world of broadcasting, including the heads of the BBC, ITV, Channel 4 and Channel 5.

During the series of pre-recorded panel discussions and interviews, plus a live debate, we will explore a range of themes, including: what role PSB should play in future; how best audiences’ needs are met; and how PSB might be funded and supported going forwards. The sessions will be hosted by broadcasters Adam Boulton, Cathy Newman, Krishnan Guru-Murthy, Nina Hossein and Tina Daheley.

The event opens with an introductory address from Ofcom Chief Executive Dame Melanie Dawes. She discusses how audiences have become ‘atomised’, with people consuming a wider range of shorter, tailored content on a larger number of devices – and the challenges this presents for our public service broadcasters. 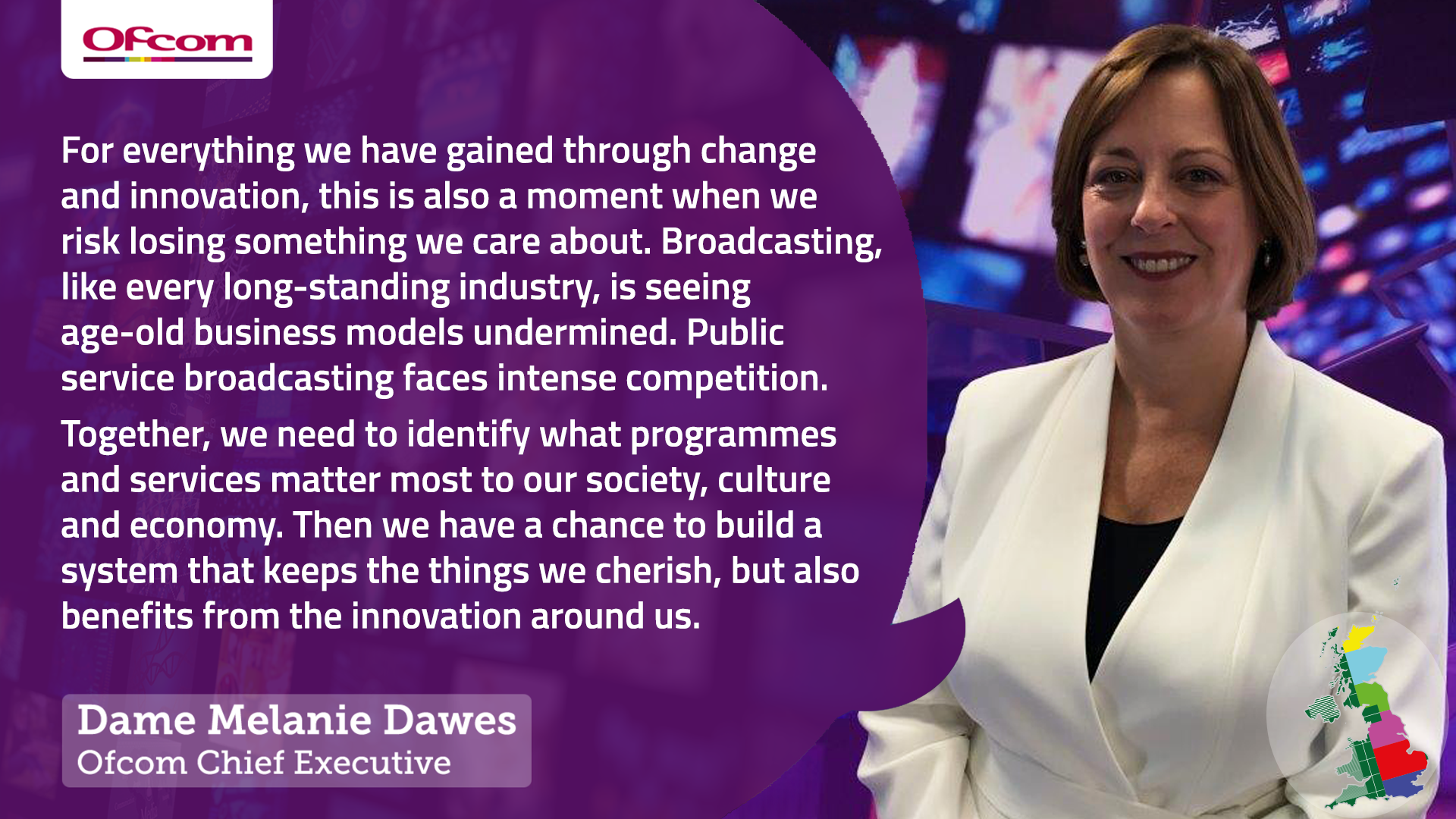 All of the discussions and interviews from this registration-only event will be available to view from 12 October at our Small Screen: Big Debate website. To keep track of the debate, follow the hashtag #SSBD2020.

In conversation with June Sarpong

The BBC’s Director of Creative Diversity, June Sarpong, talks to Channel 4 News’ Krishnan Guru-Murthy about diversity at the BBC and making public service content that connects with audiences.

Panel discussion: ‘Making Stories Count: the role of PSB in the creative industries’

In conversation with John Whittingdale MP

Minister of State for Media and Data, John Whittingdale MP, speaks to Krishnan Guru-Murthy about his priorities for PSB in the future.

On the second day we’ll hear from the following:

In conversation with Krishnendu Majumdar

Earlier this year, Emmy-winning producer Krishnendu Majumdar became the first person of colour to chair BAFTA. He talks to Krishnan Guru-Murthy about the role public service broadcasting can play as part of a successful and inclusive creative industry.

Panel discussion: ‘It’s all about the audience’

Chaired by the BBC’s Tina Daheley, this session will hear from Zai Bennett (Sky), Anna Mallett (ITN) and Shaminder Nahal (Channel 4) on what makes public service media stand out in a crowded media landscape, how broadcasters can adjust and innovate, and what content will remain crucial for audiences.

In conversation with Mark Thompson

As a former Chief Executive of Channel 4, Director-General of the BBC and until this month CEO of The New York Times Company, Mark Thompson has led change across the media sector. He speaks to Krishnan Guru-Murthy about the challenges and opportunities that lie ahead for public service broadcasting in the UK.

Panel discussion: ‘Show me the money: Funding PSB for the future’

In this session, chaired by Channel 4 News’ Cathy Newman, we’ll hear from Mathew Horsman (Mediatique), Rasmus Nielsen (The Reuters Institute) and Dame Frances Cairncross about the funding challenges facing PSBs and the different tools that could be used to overcome them.

In conversation with Simon Pitts

Simon Pitts has been CEO of STV since January 2018. He talks to Krishnan Guru-Murthy about leading a commercial public service broadcaster during a period of unprecedented change.

The third day sees a live panel discussion between the leaders of the major UK public service broadcasters:

Public service broadcasting – The view from the top

This live streamed debate will see Alex Mahon (Channel 4), Dame Carolyn McCall (ITV), Maria Kyriacou (Channel 5) and BBC Director-General Tim Davie debating the challenges and opportunities that lie ahead for public service broadcasters, as they cater for audiences in a time of change.

In this session, Sky News’ Adam Boulton will be asking what they think the future holds for public service broadcasting in the UK, the role they can play and what needs to happen to ensure PSB delivers for audiences over the next decade. The set for our Small Screen: Big Debate 2020 virtual event