Children are now spending an average of just over two hours a day online, and a new study by Ofcom highlights the reasons young people are drawn to video services such as Netflix and YouTube.

Our annual study of media use found children in the UK (aged 5 to 15) now spend around 20 minutes more online per day than they do in front of a TV set – just over two hours online, and a little under two hours watching TV. 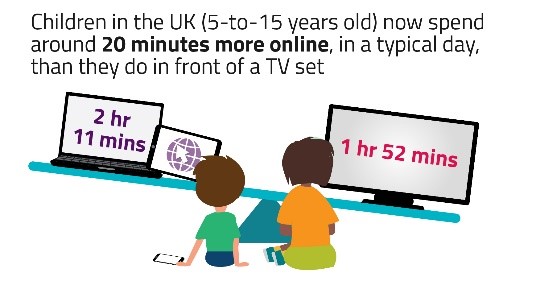 In 2018 children’s online time stopped growing for the first time, at an average of 2 hours 11 minutes per day. But year on year their average daily TV time has fallen by almost eight minutes, to an estimated 1 hour 52 minutes.

YouTube is still the main online destination for children, with four in five children having used it. Nearly half of children, and a third of pre-schoolers aged 3 to 4, now watch services such as Netflix, Amazon Prime Video and Now TV.

Among those who watch both YouTube and TV programmes on a TV set, nearly half of children aged 8 to 11 and older children aged 12 to 15 prefer watching content on YouTube. However, more than a third get the same enjoyment from both viewing experiences.

Life on the small screen

To help understand why children are drawn towards online content, we carried out a detailed study of children’s viewing.

A panel of 40 boys and girls, aged 4 to 16, from around the UK, offered diaries and interviews on what they were watching and why. The study found:

Yih-Choung Teh, Strategy and Research Group Director at Ofcom, said: “Children have told us in their own words why online content captures most of their attention. These insights can help inform parents and policymakers as they consider the role of the internet in children’s lives.

“This research also sheds light on the challenge for UK broadcasters in competing for kids’ attention. But it’s clear that children today still value original TV programmes that reflect their lives, and those primetime TV moments which remain integral to family life.”

Our research also found older children are finding it harder to control their screen time than they were last year.

The proportion of 12- to 15-year-olds who said they found it difficult to moderate their screen time has increased to a third (35%), up from a quarter (27%) the year before. Seven in ten older children (71%) said they are allowed to take their mobile phone to bed.

But in spite of these challenges, around two-thirds of 12- to 15-year-olds felt they achieved a good balance between screen time and doing other things.