Why does Ofcom keep an eye on weather in space?

Despite being millions of kilometres from Earth, there is a possibility that the Sun's changing activity might disrupt the wireless communications, electricity grids and GPS we all use every day.

Here, Clare Allen, senior spectrum engineer at Ofcom, explains why that’s the case, and how we can monitor the Sun’s activity to help reduce disruption to vital services.

The Sun is a huge mass of electrically charged gas, a plasma with a powerful magnetic field that gives off  large amounts of energy into space. Solar emissions in the form of light, heat and even some forms of the ultraviolet radiation make it possible for life to exist on Earth.

Solar activity fluctuates over timescales lasting from minutes and days to decades. The differences in the emission of radiation levels between these events can be more than 1,000 times, creating dynamic space weather and affecting the rest of the solar system and Earth’s atmosphere. 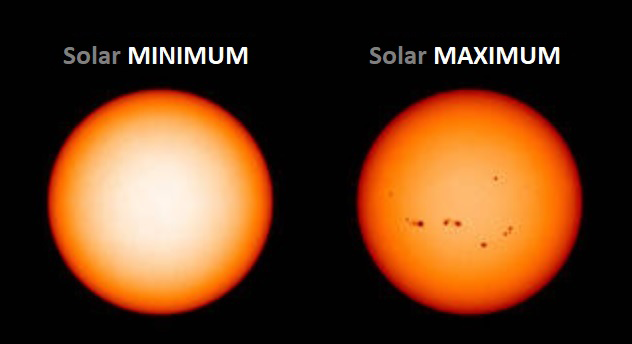 The sun at different points of the solar cycle (https://www.nasa.gov/feature/goddard/2020/what-will-solar-cycle-25-look-like-sun-prediction-model).

Solar cycles and how they are monitored

The Sun’s magnetic field follows a cycle over a period of about 11 years -  these cycles are monitored by counting 'Sunspots'. In periods of heightened activity, sunspots appear on the Sun’s surface because of the strong magnetic fields blocking the escape of heat from the Sun’s extremely hot core (15 million degrees Celsius).

During each solar cycle, the Sun’s magnetic poles switch places. This changeover is marked by a period of low activity in the Sun’s magnetic field known as a ‘solar minimum’ when few sunspots are observed on the Sun’s surface. Solar activity increases to a ‘maximum’ (when a higher number of sunspots can be seen) at the mid-point of the reversal of the poles, and then falls to another minimum as the poles are fully reversed.

After eight months of careful observations, the start of current ‘Solar Cycle 25’ was announced. It is forecast to be another weak one, reaching a peak around July 2025. However, it could break the trend of weakening solar activity seen over the past four cycles. 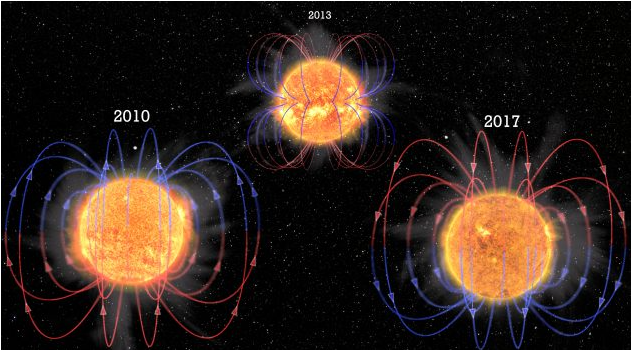 Simulation of the Sun’s change in magnetic pole during solar cycle 24 (https://insider.si.edu/2017/07/3d-simulations-reveals-sun-flips-magnetic-field-every-11-years/).

Sunspot observations since 1750. The method to count sunspots has evolved over time and present-day results are not directly comparable with the observations made centuries ago.

Irrespective of the solar cycles, the Sun is always emitting charged particles into space, creating dynamic space weather with winds and storms of varying speeds and densities. As the solar cycle progresses towards a ‘maximum’, these events become more frequent and intense. In periods of heightened activity, powerful solar storms occur with explosions (solar flares) that break out and send tons of energy into space at the speed of light. These flares sometimes come with huge solar eruptions ejecting balls of plasma into space and the solar winds carry ​​​​​​​this plasma through interplanetary space.

Eventually, these storms reach the  ionosphere,  the upper atmosphere approximately 50 km above Earth’s surface. This layer is composed of charged particles and free electrons formed due to the ultraviolet radiation from the Sun. Even during quiet space weather periods, the ionosphere is dynamic and, when there is heightened activity, the ionosphere becomes super-charged creating the amazing natural spectacle of auroras.

What could go wrong?

Solar activity can affect the performance and reliability of technology systems in space and on Earth. Heightened solar activity can also have devastating impacts on our power distribution networks, disrupt Global Navigation Satellite System (GNSS), spacecrafts, space and ground-based communication.

Wireless services in high frequency spectrum: These services can carry communications over very long distances by using the ionosphere as a mirror to reflect radiowaves back towards Earth. For example, shortwave broadcasts can provide radio services around the globe. The spectrum is also widely used by ships and planes for emergency communications. Solar flares and storms can make the ionosphere less reflective and the radiowaves disappear up into the sky. So, sometimes when high frequency services don’t work, this may be due to solar activity.

Global Navigation Satellite System (GNSS): We heavily rely on GNSS such as GPS for everyday navigation and it has become an integral part of mobile phones, vehicles and any equipment that needs location measurements. High precision GNSS systems are also used in applications crucial to society supporting construction, exploration, farming, surveying, banking and many other industries. The accuracy of GNSS systems can be affected during a severe space storm, leading to positioning errors.

Electrical power transmission: The electric power grid, which provides  power to our homes, businesses and network infrastructure can be disrupted by space weather. This can cause protective equipment to trip and cause stability problems leading to partial or total blackouts.​​​​​​​

Why it's important to monitor space weather

Scientists and agencies around the world operate observatories and instruments that monitor the Sun and space weather, working to improve predictions of future events. The biggest solar activity event on record is the Carrington Event, which hit Earth in 1859 and caused telegraph systems across America and Europe to fail. Other significant past events include:

2017 Atlantic hurricanes: Three tropical storms over the Atlantic coincided with the eruption of major solar flares on the surface of the Sun. Amateur radio operators assisting with emergency operations in the Caribbean islands lost communications for eight hours and air traffic control lost communication with a cargo plane for 90 minutes.

1989 Canada Quebec power outage: A solar storm caused a 12-hour power blackout in Quebec province in Canada. Within minutes of the storm over 200 faults were reported in power grids across the United States. In space, some satellites spiralled out of control for several hours and on the Discovery space shuttle a critical sensor temporarily malfunctioned.

A typical solar cycle can produce two or three significant storms and there is always a chance that in future there will be more intense storms. In 2012, a solar storm of similar magnitude to the Carrington Event missed Earth's orbit by just over a week.​​​​​​​

​​​​​​​​​​​​​​Keeping track of solar activity and building resilient networks will help us to manage the risk of impact on vital communication services and electricity grids.​​​​​​​​​​​​​​ 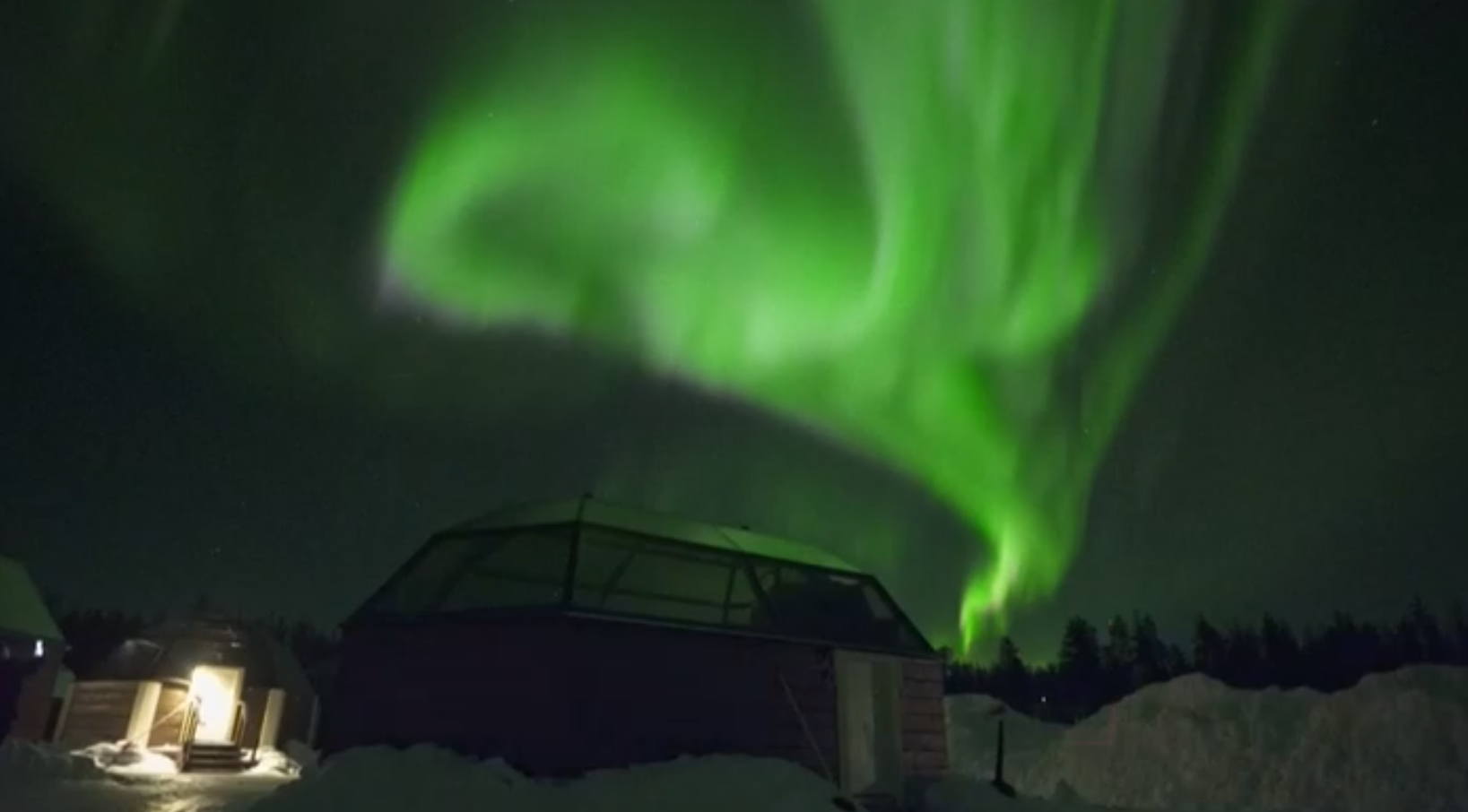