Competition in the UK's broadband market has reached a significant milestone.

The number of unbundled lines - where rival communications providers such as Sky or TalkTalk offer services over BT's copper telephone network - has passed the 7 million mark.

The spur for the surge in unbundling was a set of legally-binding Undertakings that Ofcom agreed with BT Group plc in September 2005. These required BT to set up a new division, called Openreach, to provide services to rivals.

At the time there were just 123,000 unbundled lines in the UK and the majority of people could only get their broadband and landline telephone service from one provider - BT.

According to Ofcom's latest research, there are now over 19 million broadband lines in the UK. Of these more than 70% are provided by companies other than BT many on the basis of unbundled lines.

Today there are over 30 different companies offering unbundled services to homes and small businesses. This has helped to drive up broadband take-up and drive down fixed-line prices.

In September 2005, 37 per cent of households and small businesses had broadband; today the figure is 71 per cent.

Competition also means lower bills for consumers. According to Ofcom research consumers were paying on average £23.30 a month (excluding VAT) for a broadband service delivered over a copper phone line* in the last quarter of 2005. Today they are paying around £13.31 for the same service. A graph showing how the number of unbundled lines has increased since 2005 can be found below: 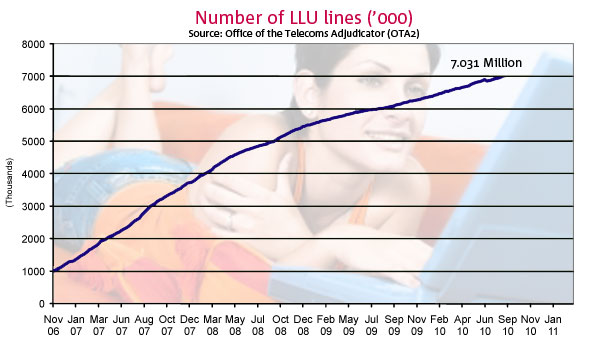 *Delivered over a Digital Subscriber Line, a technology that turns an ordinary copper phone wire into a high speed digital line capable of delivering broadband internet.

1. The local loop unbundling figures are published by the Office of the Telecommunications Adjudicator, the independent organisation set up to oversee the unbundling process. Its latest report shows that in August 2010 there were 7,031,400 unbundled lines in the UK. The latest report can be found here: http://www.offta.org.uk/

2. In Q4 2009 consumers paid around £13.31 (excluding VAT) for a broadband service delivered over a copper phone line.

3. The figures on broadband take-up and residential bills are in Ofcom's latest Communications Market report published on 19 August 2010.

4. Under section 3 (1) of the Communications Act 2003, Ofcom has a duty to further the interests of consumers in relevant markets where appropriate by promoting competition.

6. For further information about Ofcom please visit: www.ofcom.org.uk. Ofcom's news releases can be found at: http://media.ofcom.org.uk/