Charges that consumers face for leaving their landline phone contracts early will be cut by as much as 85 per cent, Ofcom announced today.

Over the past 18 months, Ofcom has been working with the three biggest UK landline providers, BT, TalkTalk and Virgin Media, to ensure that the charges they levy when customers end their contracts early (early termination charges), reflect the costs that the providers save by no longer providing the service. Cheaper early termination charges will also apply to landline customers who receive broadband in the same package.

Ofcom published a statement about its view of the law in December 2008, and opened a monitoring and enforcement programme in early 2009 to check whether communications providers terms and conditions comply with the Regulations.

BT, TalkTalk and Virgin Media do not believe their early termination charges were unfair. But, after constructive discussions, they have agreed to significantly reduce those charges for landline (or landline plus broadband) services. Ofcom is pleased they have taken these positive steps in the interests of consumers.

Each provider has different costs to account for so early termination charges will vary from provider to provider. 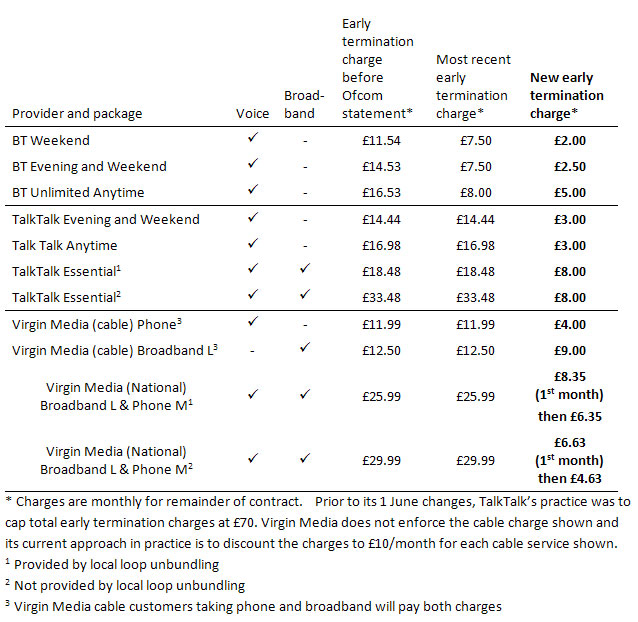 *The charges listed in the table above were accurate at the time of publication  but will not be updated.  Going forward, CPs will be able to amend their early termination charges to reflect changes in their costs, commercial strategy etc.  However, they will continue to be subject to the ongoing need to comply with their obligations under General Condition 9.3 in relation to early termination charges.

TalkTalk introduced its new charges on 1 June 2010 (except for its Tiscali brand, where charges will change on 1 November 2010). Virgin Media and BT will introduce the new charges in October 2010.

Ofcom expects other landline providers to apply similar principles and to reduce their early termination charges to similar levels. If they don't, they could face formal enforcement action.

Ofcom's Partner for Strategy and Market Developments, Peter Phillips, said: We very much welcome the reductions made by BT, TalkTalk and Virgin Media which mean that consumers will face much lower charges if they wish to end their contracts early.

3. Ofcom's statement on additional charges can be found on the Ofcom website.

4. The Regulations apply to standard contract terms between businesses and consumers, to protect consumers against unfair terms. Ofcom does not decide whether terms are fair or not (and it is not doing so in this case), and only a court can do that. But, along with the OFT and other bodies like local authority Trading Standards, we can take legal action to prevent the use of potentially unfair terms.

5. Local loop unbundling is where a phone company other than BT installs its own telecoms equipment into the local BT exchange. It can then offer its own direct phone or broadband service.