Telecoms and pay-TV complaints from January to March 2012

The fifth quarterly report shows which providers have generated the most complaints to Ofcom1. The research aims to provide useful information for consumers and also to incentivise operators to improve their performance.

Since the report was first published in April 2011, it has included telecoms companies providing broadband, landline and mobile telephone services. This report, covering the first quarter of 2012, is the first to include complaints relating to the provision of pay TV services.

The data covers telecoms and pay TV providers with a market share greater than 4 per cent2. For pay TV, this accounts for three companies: Sky, Virgin Media and BT Vision. The telecoms data now covers 18 months, allowing consumers to check providers' performance over a sustained period of time.

Overall, complaint levels are much lower for pay TV and mobile telephony than for landline telephony and broadband services.

From January to March 2012, Ofcom received the most complaints about BT Vision, with 0.27 complaints per 1,000 customers. The figures for Virgin Media and Sky were 0.07 and 0.03 respectively. Ofcom analysis suggests a number of reasons for the relatively high number of complaints about BT Vision, including issues related to their sales processes and problems with billing. We note, however, that BT Vision improved its performance quarter-on-quarter.

This is the sixth consecutive quarter during which TalkTalk and Virgin Media have attracted the most and fewest complaints respectively about landline services. However, TalkTalk received its fewest quarterly complaints in the three months to March 2012. 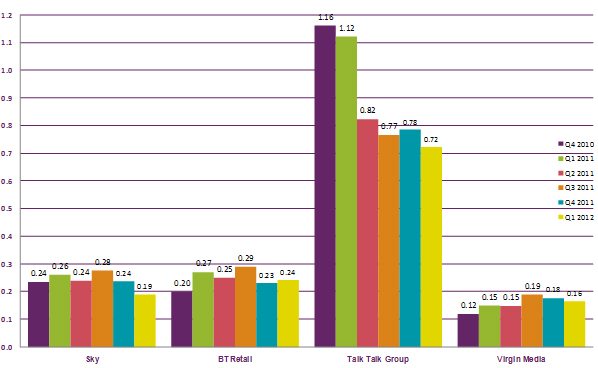 As in previous quarters, the data shows TalkTalk was the most complained about broadband provider in the period, generating 0.56 complaints per 1,000 customers over the quarter. 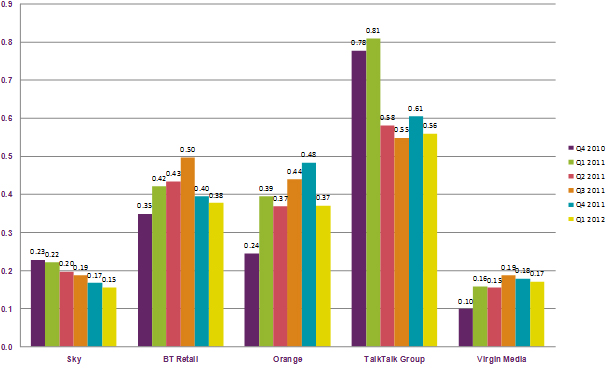 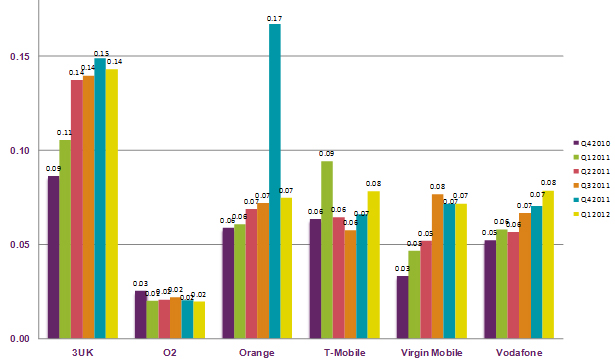 1.  Consumers typically raise a complaint with their provider in the first instance. If the provider is not able to resolve the complaint within eight weeks, the consumer can make an application to an independent Alternative Dispute Resolution (ADR) scheme, which can examine the complaint and reach a judgement on the issue. In addition, some consumers contact Ofcom: on average, we receive around 300 consumer complaints a day. While we do not resolve individual complaints, we offer advice on how best to resolve the issue and use the data to inform policy and enforcement actions.

2.  Advice for consumers on how to complain about a telecommunications provider can be found on Ofcom's website.

4.  The limitations of Ofcom's complaints data are set out in the report.