N.B. This page concerns research from 2013. Please search our latest news for the most-up-to-date research.

The report also shows that the average broadband speed has more than quadrupled since Ofcom first began publishing speeds data in November 2008 - an increase of 309% (or 11.1Mbit/s).

Take-up of 'superfast'1 services and providers' automatically upgrading customers on to faster broadband packages continued to drive the increase in the national average speed.2 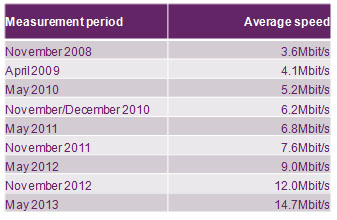 The move to higher speeds is partly down to Virgin Media’s network upgrade to double the speeds of most of its cable broadband customers. As a result, the average speed on cable has nearly doubled over the last year from 18.0Mbit/s to 34.9Mbit/s.

Consumers are also choosing to migrate to faster fibre packages. BT reported that it had 1.3 million fibre broadband connections at the end of March 2013, up from around 550,000 a year earlier.4 In May 2013, the average fibre-based connection speed was 43.6Mbit/s, up by over a third (38%) over the year.

Today's report includes speeds measurements for three additional ISP packages - Virgin Media's 'up to' 120Mbit/s cable service and Plusnet's 'up to' 76Mbit/s and 'up to' 38Mbit/s fibre-to-the-cabinet services. All average speeds are measured over a 24-hour period.

Of the 14 ISP packages included in the report, Virgin Media's 'up to' 120Mbit/s service achieved the fastest download speeds, an average of 112.6Mbit/s. The average download speed on Virgin Media’s ‘up to’ 100Mbit/s was 88.8Mbit/s.

The research reveals that the average download speed of all superfast connections included in the report continued to increase, reaching 45.3Mbit/s in the six months to May 2013 (an increase of 0.7Mbit/s, or 2%).

Table Two:Average download speeds by ISP package5These ranges reflect the average speeds that would be achieved 95 times out of 100 if the exercise was repeated with 100 sets of different panellists. If the range of two operators overlaps, then these operators offer comparable performance. These ranges are not a description of the range of speeds actually measured. 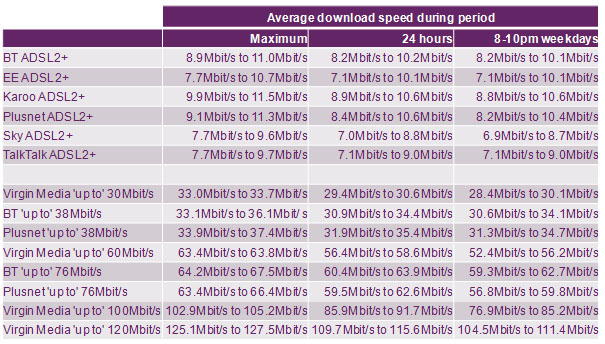 Ofcom's research also looks at upload speeds, which are particularly important to those consumers looking to share large files or use real-time video communications.

The research found that Plusnet's 'up to' 76Mbit/s service delivered the highest upload speeds of all the packages measured, averaging 16.8Mbit/s.6

The report contains analysis comparing average peak time speeds (weekdays from 8pm to 10pm) with maximum connection speeds (the maximum speed achieved by each connection during the month).

Download speeds often fall during peak busy periods when a large number of people are using their broadband connections at the same. This puts capacity constraints on ISPs' networks known as 'contention'.7

The most significant differences in speeds achieved at peak times occurred for superfast packages.

The gap between average download speeds in urban and rural areas has nonetheless widened from 9.5Mbit/s in May 2011 to 16.5Mbit/s in May 2013. This is due to the lower availability of superfast broadband services in rural areas compared to urban areas, and because ADSL broadband speeds are also generally slower in rural areas because the average line between the home and the nearest telephone exchange needs to be longer. While the gap between average urban and rural speeds is likely to widen in the short term, Ofcom expects that it will begin to decline over time, as the availability of superfast broadband increases in rural areas.

The Government has committed funding to improve broadband in rural areas. This is to ensure that 95% of UK premises have access to superfast broadband by 20178 and that a minimum service of 2Mbit/s is available to all.9

Claudio Pollack, Ofcom's Consumer Group Director, said: "With the average household now owning more than three types of internet-connected devices, consumers are demanding more than ever from their broadband service.

"Internet providers have responded by upgrading customers to higher speed services and launching new superfast packages. To help consumers make informed purchasing decisions, our report offers a useful insight into the actual speeds and level of reliability delivered by many of the broadband packages available on the market today.

The results help consumers to understand the significant variations in the performance of ISP packages and, when considered alongside other factors such as price, to make more informed purchasing decisions.10

All of the UK's largest ISPs are signatories to Ofcom's Voluntary Code of Practice on broadband speeds. Ofcom recently conducted mystery shopping to check ISPs' compliance with the code.

Ofcom will also shortly be publishing research into whether ISPs need to improve the information they provide on traffic management policies.

The research looked at 14 packages provided by the seven largest ISPs by subscriber numbers. There were 736 million separate test results recorded in 2,218 homes during May 2013.