The average broadband speed delivered by cable services is now faster than that of fibre, according to Ofcom research.

Ofcom has also today published new information to help consumers understand their options when choosing a new broadband service or get the most from their existing broadband.

Key findings from Ofcom’s research show that, between November 2013 and May 2014:

The average speed delivered via cable broadband connections increased by 3.1Mbit/s (8%) to 43.3Mbit/s in the six months to May 2014. This was mainly due to cable customers upgrading to faster services.

Average speeds for ADSL connections - the most common type of broadband - increased by 0.7Mbit/s (10%) to 7.4Mbit/s during the six months to May 2014. This is potentially a result of broadband infrastructure improvements related to fibre roll-out, such as capacity upgrades, which are also benefitting ADSL connections.

Virgin Media’s ‘up to’ 152Mbit/s cable service, which launched in February 2014, achieved the fastest download speed over a 24 hour period, averaging 141.9Mbit/s.

This was followed by BT’s ‘up to’ 76Mbit/s fibre package, which delivered an average download speed of 62.0Mbit/s.

Ofcom’s research also examines upload speeds, which are particularly important to those consumers wishing to share large files or use real-time video communications. The research found that Plusnet’s ‘up to’ 76Mbit/s package delivered the fastest upload speeds at 17.1Mbit/s on average.

Broadband speeds can fall at peak times due to the volume of people trying to access the network simultaneously. This is known as network ‘contention’. The research found that the extent to which speeds were maintained during peak periods (8pm to 10pm) varied significantly between providers.

EE’s ‘up to’ 38Mbit/s package experienced the greatest degradation in speeds during peak times. The average speed for this type of connection between 8pm and 10pm was 27.2Mbit/s - 76% of the maximum speed (35.8Mbit/s). Five per cent of consumers on this package received average peak-time speeds that exceeded 90% of their maximum speed.

In comparison, customers on Sky’s ‘up to’ 38Mbit/s package saw the least degradation in average speeds. Speeds achieved during evening peak-time (34.5Mbit/s) were 96% of the average maximum speed (35.9Mbit/s).

The rural and urban gap

Ofcom’s analysis suggests, however, that in the six months to May 2014, rural customers experienced a bigger increase in average broadband speeds (up by 20% to 13.6Mbit/s) than people in urban and suburban areas (up by 5% to 33.4Mbit/s and 22.9Mbit/s respectively).

None of the recorded increases in average speeds in urban, suburban and rural areas, or the reduction in the gap between average urban and rural areas were ‘statistically significant’ to the level of confidence used elsewhere in the report. Therefore, these findings should be treated as indicative only.

The data suggests, however, that the gap between speeds in rural and urban areas could be narrowing. This is to be expected as rural availability and take-up of fibre broadband services increases. The indicative increase in rural speeds is likely to be driven by a small proportion of rural panellists in the research who have taken advantage of superfast services available in their area.

This early analysis, which will be developed in future reports, indicates that ADSL broadband customers experienced an average of 0.5 disconnections lasting longer than 30 seconds per day.

Customers on superfast fibre and cable broadband packages experienced less disruption to their internet connections - an average of 0.1 disconnections lasting longer than 30 seconds per day.

Ed Richards, Ofcom Chief Executive, said: “More and more consumers are benefitting from improvements to the UK’s broadband infrastructure. While good progress is being made, there is still work to do in ensuring more widespread distrbution of high-speed, reliable broadband services across the UK.

“It’s important for us to provide consumers with the best possible information to help them understand the options available to them when choosing broadband, how different packages perform, and what they can do to get the most from their services.”

1. The research looked at packages provided by the seven largest ISPs by subscriber numbers. Consumers should note that there are many other services available, some of which may match or better the performance of some of the ISP packages included in this report. There were 2.7 billion separate test results recorded in 2,175 homes during May 2014.

2. Cable networks use a mixture of fibre optic cable and coaxial cable to transmit data to the end user, whereas the networks that we refer to as ‘fibre’ networks are mainly FTTC networks which use fibre to transmit data from the exchange to the street cabinet and the twisted copper pair for the remainder of the journey to the user’s premises. 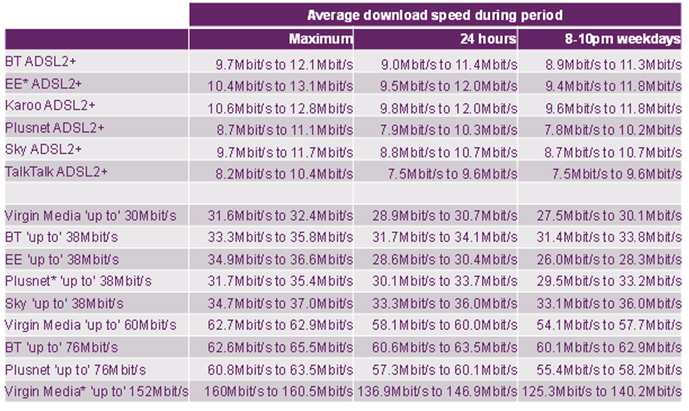 4. These ranges reflect the average speeds that would be achieved 95 times out of 100 if the exercise was repeated with 100 sets of different panellists. If the range of two operators overlaps, then these operators offer comparable performance. These ranges are not a description of the range of speeds actually measured.
Source: SamKnows measurement data for all panel members with a connection in May 2014.
Panel Base: 1,711. Notes: (1) Includes only ADSL customers within 5km of the exchange and in Geographic Markets 2 and 3 and in the Kingston-upon-Hull area for Karoo; (2) Includes on-net customers only for LLU operators (3) Data for ADSL operators have been weighted to ISP regional coverage of LLU lines and distance from exchange; data for Virgin Media’s cable service have been weighted to regional coverage only; (4) Data collected from multi-thread download speed tests; (5) The range shown represents a 95% confidence interval around the mean.

5. In April 2012, guidance on the use of speed claims in broadband was introduced. This was produced by the Committee of Advertising Practice and the Broadcast Committee of Advertising Practice. The guidance states that advertised speed claims have to be achievable by at least 10 per cent of the relevant ISP’s customer base. Many ISPs have since stopped promoting their services primarily on the basis of speed. In July 2011, Ofcom introduced a strengthened voluntary broadband speeds code of practice to help ensure consumers are aware of the likely broadband speed they can get on their line from an ISP, before signing up to a service. Last year, Ofcom conducted mystery shopping to check ISPs’ compliance with the code which found that, overall, it is working effectively.Ofcom has, however, identified areas where the code might be strengthened further to better serve consumers and has discussed improvements with providers. Ofcom expects to publish a revised code of practice by the end of 2014.

6. Figure 1: Source: SamKnows measurement data for all panel members with a connection in May 2014. Panel Base: 1,711.Notes: (1) Includes only ADSL customers within 5km of the exchange and in Geographic Markets 2 and 3 and in the Kingston-upon-Hull area for Karoo; (2) Includes on-net customers only for LLU operators (3) Data for ADSL operators have been weighted to ISP regional coverage of LLU lines and distance from exchange; data for Virgin Media’s cable service have been weighted to regional coverage only; (4) Data collected from multi-thread download speed tests; (5) The range shown represents a 95% confidence interval around the mean.

7. The research was conducted in partnership with broadband monitoring company SamKnows. For more details, visit www.samknows.com. Ofcom is the independent regulator and competition authority for the UK communications industries, with responsibilities across television, radio, telecommunications, wireless communications and postal services.

8. For further information about Ofcom please visit ofcom.org.uk. Ofcom’s news releases can be found at media.ofcom.org.uk