Telecoms and pay-TV complaints from January to March 2014

This page concerns data from 2014.

Ofcom today published the volumes of complaints made against the major providers of telecoms and pay TV services between January and March 2014.

This is Ofcom's thirteenth quarterly report, which aims to provide useful information for consumers when choosing a provider and incentivise operators to improve their performance.

The total volume of telecoms and pay TV complaints made to Ofcom increased slightly in Q1 2014.

The report now presents pay-monthly mobile phone complaints against Orange, T-Mobile and 4GEE in a combined form - as 'EE'. This reflects that EE has started to consolidate the three brands following the merger of Orange and T-Mobile.

Since Q4 2014, as part of its brand consolidation, EE has integrated its online and high street presence and unified the consumer experience in terms of network access and customer service operations.

Claudio Pollack, Director of Ofcom's Consumer Group said: "Publishing complaints data is a key part of our work to provide useful comparative information for consumers, and drive improvements in quality of service across the communications sector.

"The report highlights the performance of providers relative to each other. This is valuable information that consumers may wish to consider alongside other factors such as price and availability, for example, when choosing a provider".

In the landline telephone market, TalkTalk generated the most complaints during the first quarter of 2014, with 0.28 complaints per 1,000 customers.

Its complaints volumes increased slightly over the quarter and remained above the industry average. Complaints mainly related to service faults, complaints handling and billing.

BT also generated complaints above the industry average for its landline service at 0.23 per 1,000 customers in Q4 2013.

Virgin Media had the fewest number of complaints at 0.07 per 1,000 landline customers, while Sky attracted 0.10 per 1,000 customers – both below industry average. 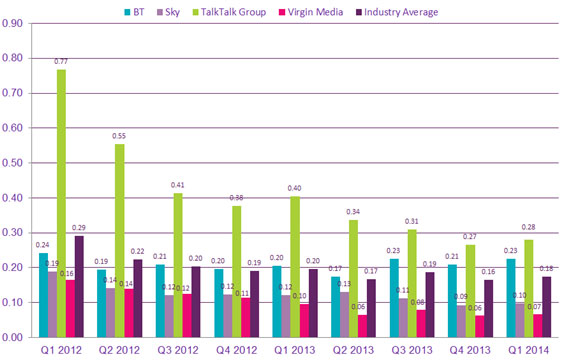 EE generated the most complaints for broadband as a proportion of its customer base during the first quarter of this year - 0.42 per 1,000 customers. Complaints were primarily driven by service faults, billing and issues with changing provider.

BT and TalkTalk also received above industry average broadband complaints at 0.33 and 0.24 per 1,000 customers respectively. 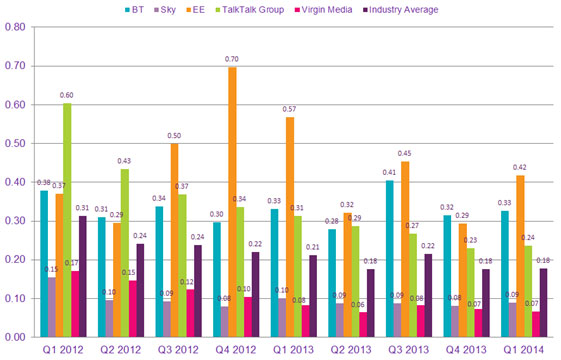 Removed while data checks being conducted.

From January to March 2014, Ofcom received the most complaints about BT TV at 0.25 per 1,000 subscribers - five times the industry average. The main drivers of its complaints were service faults, complaints handling and billing issues.

Sky and Virgin Media were below the industry average, with Sky continuing to generate the lowest volume of pay TV complaints - 0.02 for every 1,000 customers. Update to this news release: In November 2014 Ofcom removed pay monthly mobile data from complaints reports dating back to Q2 2012, after some historical data inaccuracies were identified. For further information, see Ofcom’s report on complaints for Q2 2014.