Telecoms and pay-TV complaints from April to December 2014

Ofcom today published data on the volumes of consumer complaints made against major providers of telecoms and pay TV services.

These reports provide useful information for consumers when choosing a provider, and incentivise operators to improve their performance.

The reports cover the nine months from April to December 2014. Over this period, telecoms and pay TV complaints made to Ofcom decreased slightly, continuing a long-term downward trend.

Today’s report includes data for operators with a customer market share of at least 1.5% - a lower threshold than in previous reports. As a result, for the first time, EE, Plusnet and Post Office HomePhone are included in landline complaints; Plusnet is included in broadband; and Talk Mobile and Tesco Mobile are included in pay-monthly mobile figures.

Claudio Pollack, Director of Ofcom’s Content and Consumer Group, said: “Complaints figures help inform consumers’ choices of telecoms and pay TV services. There are now more providers included in our report, so people can compare complaints figures for all the biggest companies.

“While operators still have room to improve their performance, it’s encouraging to see a continuing decline in the total volume of complaints.”

For landline telephone services, the inclusion for the first time of EE revealed it to be the most complained-about provider over the nine months, with complaints peaking at 0.33 per 1,000 customers in Q4 2014.

Plusnet, TalkTalk, BT and Post Office HomePhone also consistently generated complaints per thousand customers that were above the industry average for their landline services.

Virgin Media and Sky both attracted below-average landline complaints per customer over the period, with Virgin Media finishing the year with the lowest number (0.06 per 1,000 customers). EE generated the most complaints for broadband as a proportion of its customer base over the nine months, with 0.42 complaints per 1,000 customers by the end of 2014.

BT, Plusnet and TalkTalk also generated above industry average broadband complaints per 1,000 customers over the period.

Both Sky and Virgin Media both generated broadband complaint volumes below the industry average, both ending the year with 0.06 complaints per 1,000 customers. 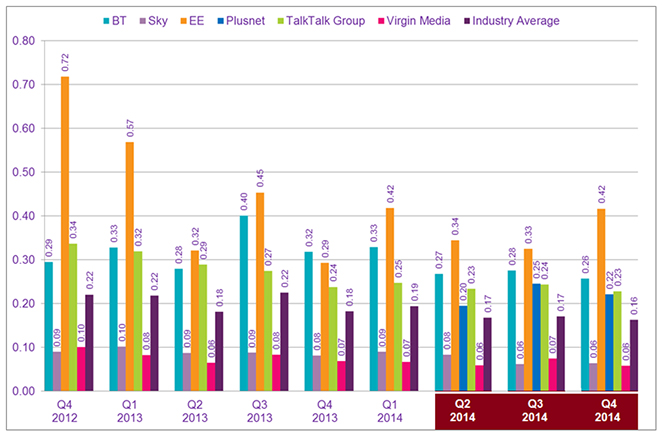 The inclusion for the first time of Tesco Mobile showed it to generate the fewest complaints in the pay-monthly mobile market, finishing 2014 with 0.02 complaints per 1,000 customers. 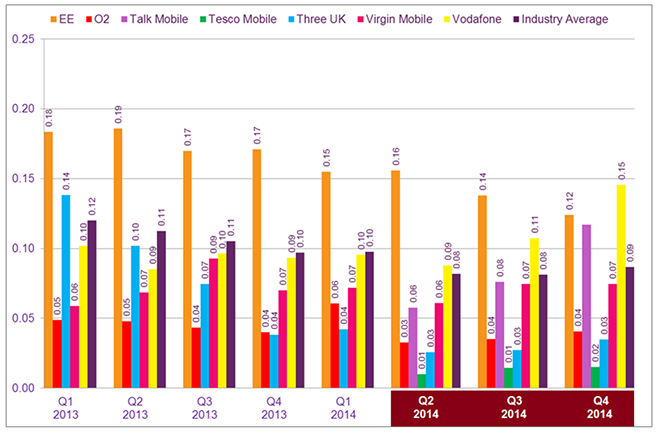 Over the nine months, Ofcom received the most complaints about BT TV, although these declined slightly to reach 0.15 per 1,000 subscribers by the end of the year. This was five times the industry average. The main causes of complaints were service faults and provisioning; complaints handling; and problems changing provider.

TalkTalk’s TV service also generated well above-average complaints, though these also declined to reach 0.10 per 1,000 subscribers by the end of 2014.

Sky continued to generate the lowest volume of pay TV complaints - 0.01 for every 1,000 customers at the end of the year. 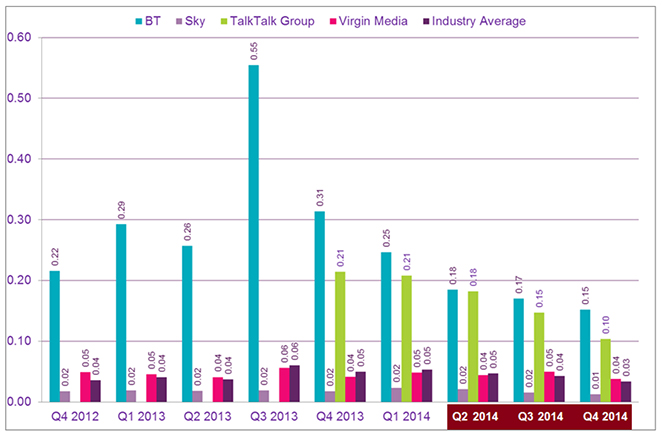 Overall complaints to Ofcom over time 1. The previous generally-applied criteria for inclusion in Ofcom’s report were a 4% or greater market share, and that Ofcom received 30 complaints or more per month about the provider. Ofcom has now removed the latter criterion, and lowered the generally-applicable qualifying market share threshold to 1.5%.

3. Consumers typically raise a complaint with their provider in the first instance. If the provider is not able to resolve the complaint within eight weeks, the consumer can submit their complaint for consideration by an Alternative Dispute Resolution (ADR) scheme under General Condition 14.5. In addition, some consumers contact Ofcom. While Ofcom does not resolve individual complaints, it offers advice on how best to resolve the issue and uses the data to inform policy and enforcement actions.

5. Advice for consumers on how to complain about a provider can be found on Ofcom's website.