Telecoms and pay-TV complaints from April to June 2015

Ofcom today published data on the volume of consumer complaints made to Ofcom against the major providers of telecoms and pay TV services.

By publishing complaints data, Ofcom aims to give people who are looking for a new provider useful information for comparing companies’ performance. The quarterly reports also offer an incentive to providers to improve their performance.

The total volume of telecoms and pay TV complaints made to Ofcom continued to decrease in Q2 2015, even as the number of consumers taking up these services increased.

Total complaints volumes for fixed line telephone and pay TV services remained at similar levels to Q1 2015. Broadband services continued to attract the most complaints, albeit at lower levels than previously.

Claudio Pollack, Director of Ofcom’s Content and Consumer Group, said: “Our complaints data allow consumers to make meaningful comparisons that can be useful when looking for a new provider.

“While it’s encouraging to see a continued decrease in the total number of complaints, there is still room for improvement. We expect providers to make customer service and complaints handling top priorities.”

Despite seeing a reduction since Q1 2015, EE continued to generate the highest volume of landline complaints as a proportion of its customer base (0.34 per 1,000 customers). 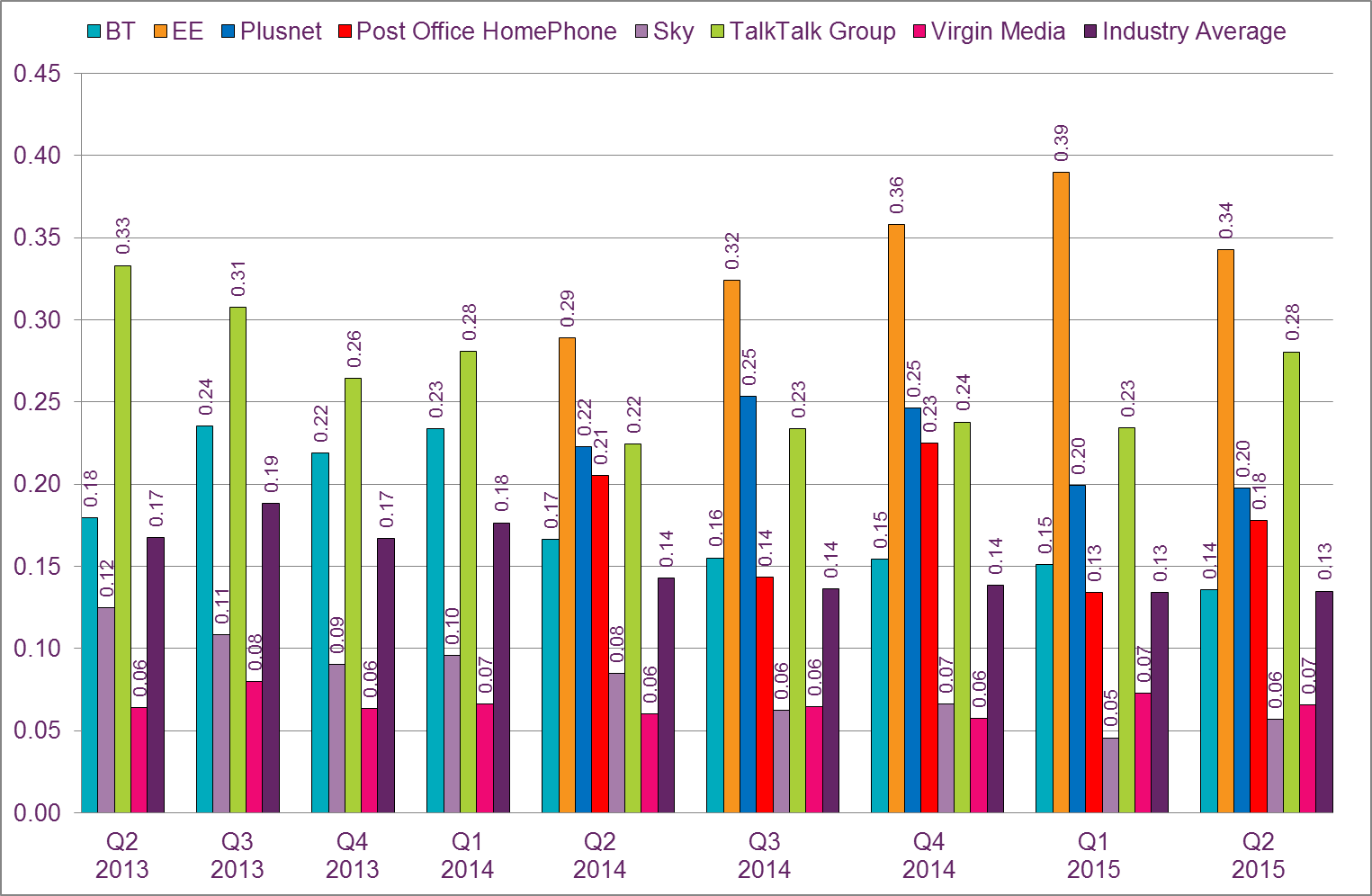 EE also generated the most complaints for broadband as a proportion of its customer base during the second quarter of this year. However, their complaints volume did decrease from 0.51 per 1,000 customers in Q1 2015 to 0.45 in Q2 2015.

Problems relating to faults, service and provision (40%), billing, pricing and charges (20%) and complaints handling (20%) were the main drivers of complaints about EE broadband. 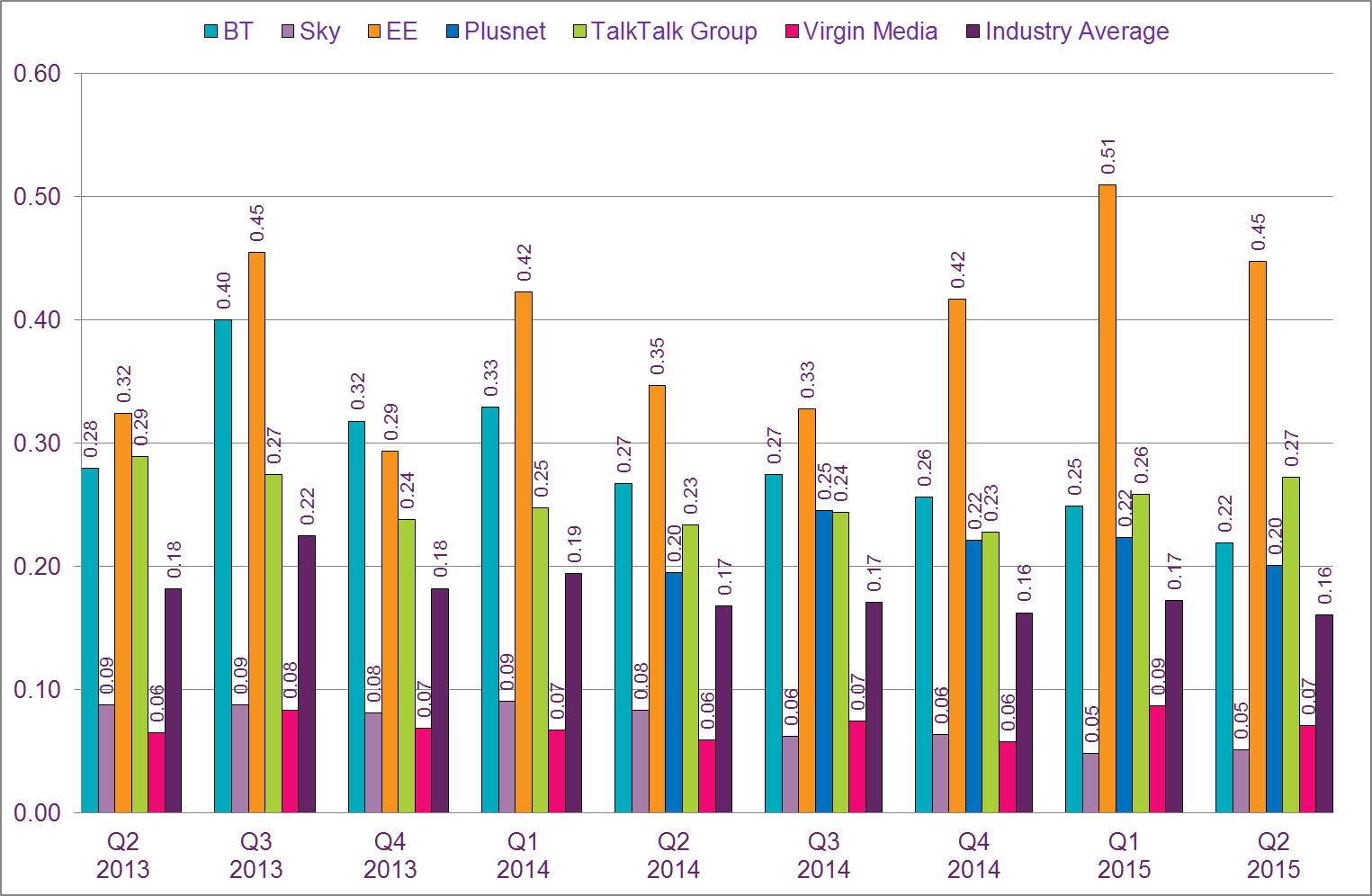 Vodafone continued to be the most complained about mobile provider in Q2 2015 (0.14 complaints per 1,000 customers).

The main drivers of Vodafone complaints were problems with billing, pricing and charges (34%), complaints handling (27%) and concerns around faults, service and provision (17%).

Talk Mobile complaints increased to 0.12 per 1,000 customers and remained above the industry average. 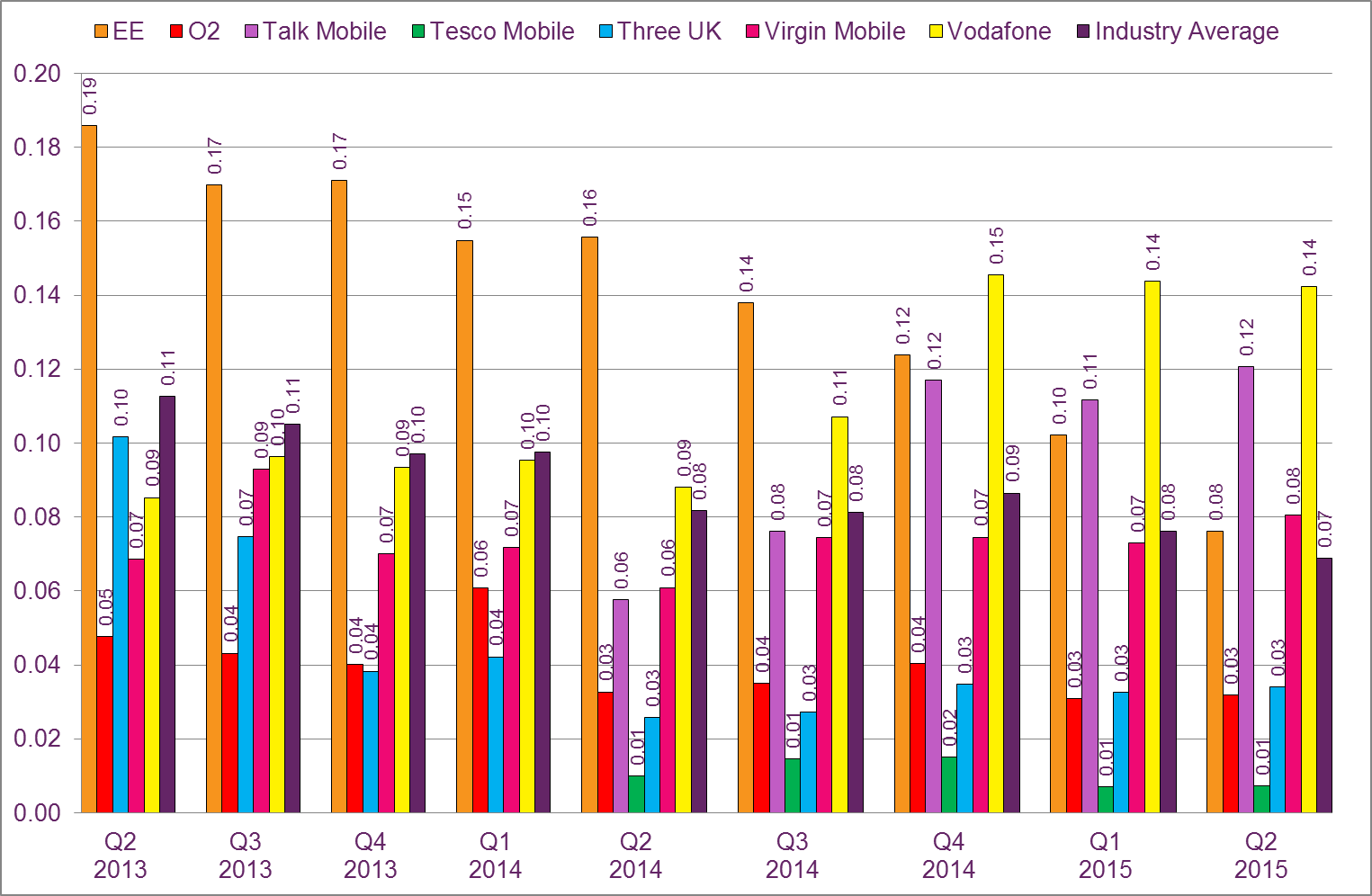 TalkTalk became the most complained about pay TV provider. Their complaints volume increased to 0.14 per 1,000 customers, compared to 0.12 in Q1 2015.

The main reasons for TalkTalk complaints were fault, service and provision issues (36%), billing, pricing and charges (28%) and issues relating to complaints handling (17%).

The only provider to generate fewer complaints than the industry average was Sky (0.01 per 1,000 customers), which remained the best-performing pay TV provider. 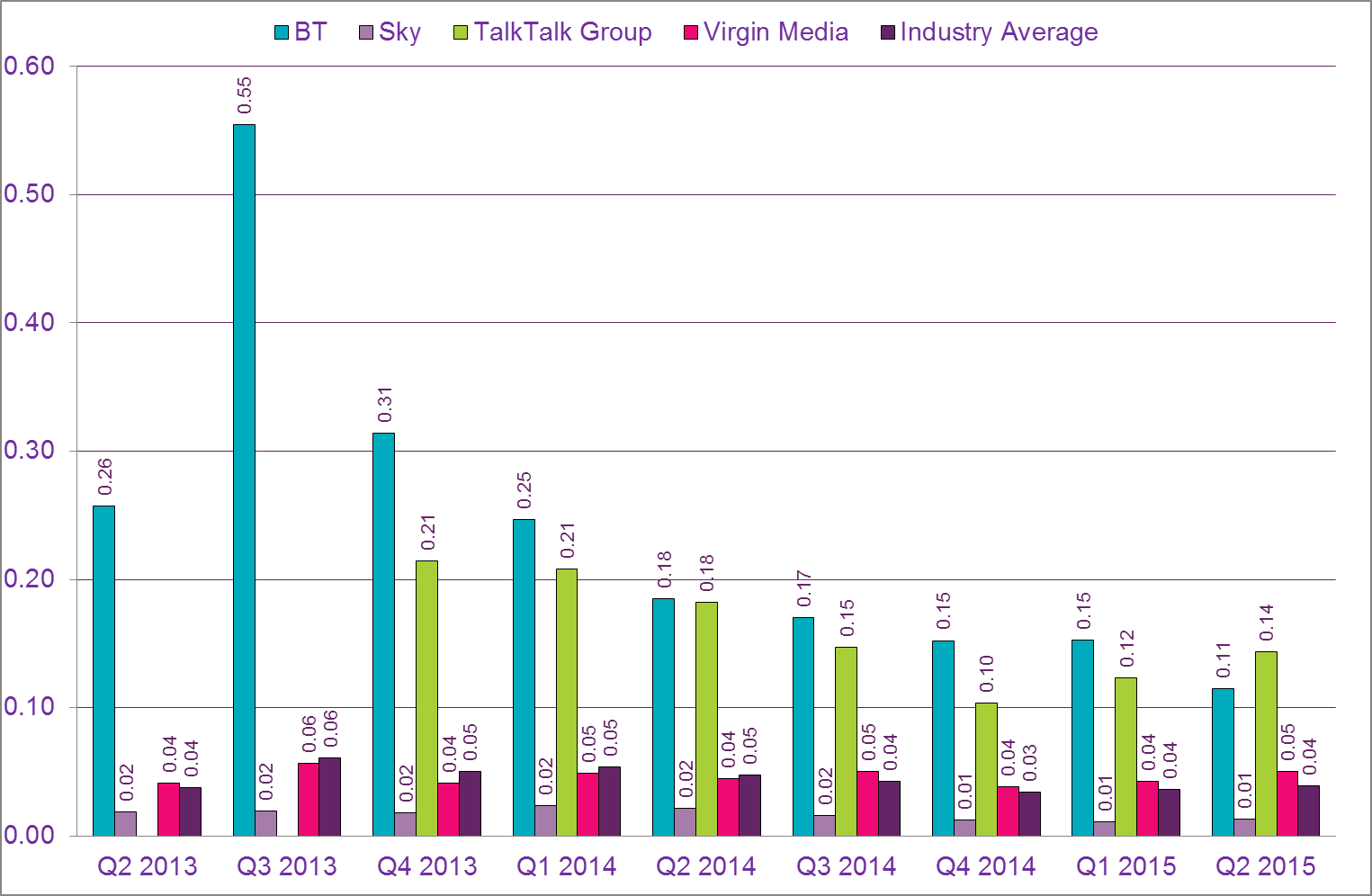 On average, Ofcom receives slightly fewer than 300 telecoms complaints a day from consumers.

These individual contacts are analysed - alongside customer service satisfaction data and other sources of evidence - to help inform when and where additional consumer protection measures may be needed.

Evidence gathered as part of this monitoring programme led to Ofcom opening separate investigations into the complaints handling procedures of Three UK and EE.

An investigation into Vodafone’s complaints handling procedures - the third to take place under this programme - is currently ongoing. 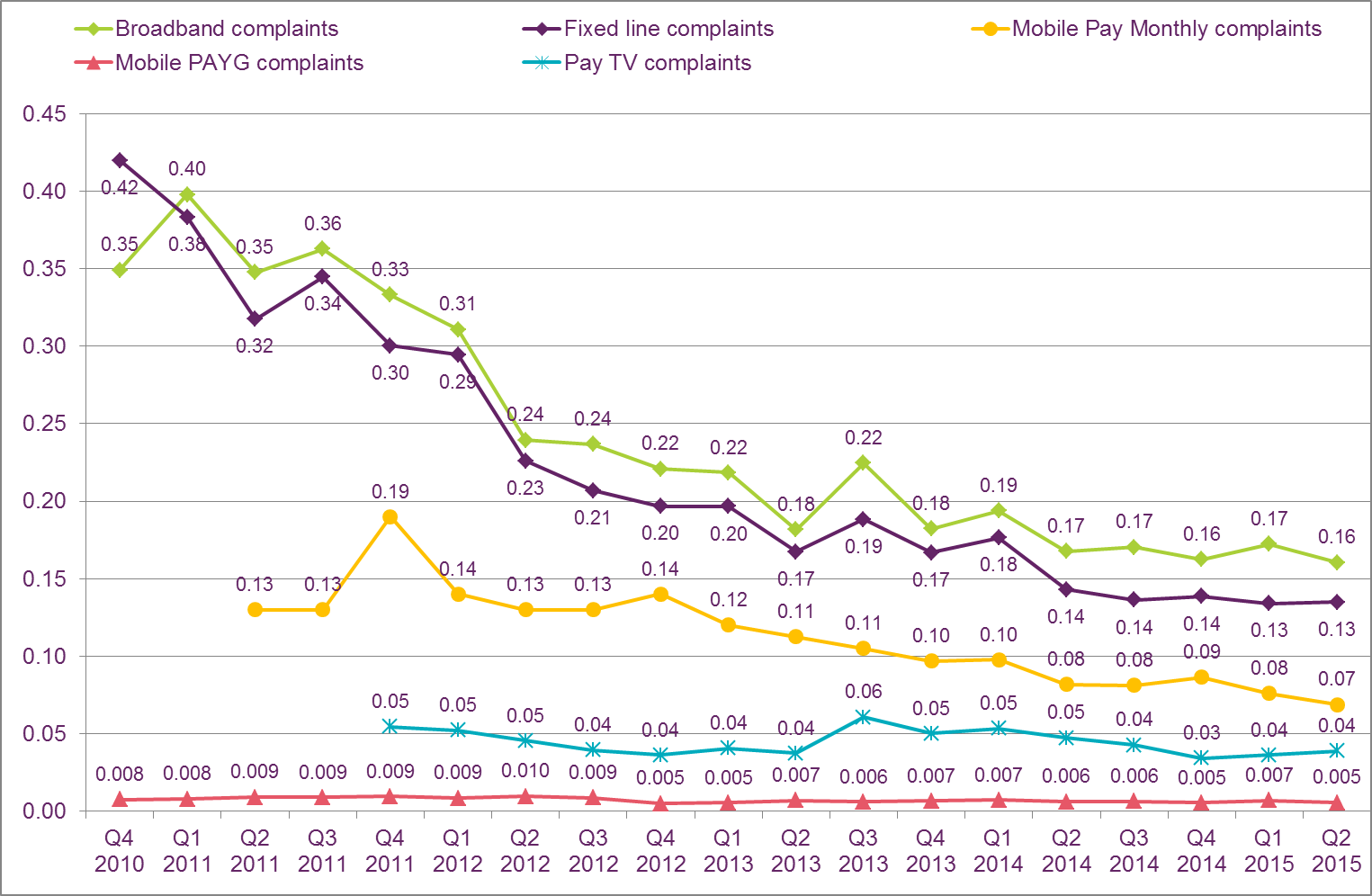