Ofcom requires the BBC, ITV, Channel 4, Channel 5 and Sky to measure the quality of their live TV subtitles, helping to identify improvements that could benefit the millions1 of viewers who use subtitles.

These include making extensive use of easier to read ‘block subtitles’, which show several words as a single block of text; cutting the number of pre-recorded programmes that have to be subtitled live; and reducing the number and duration of subtitle ‘outages’.

Broadcasters are making some progress in delivering subtitles with lower latency, the time taken between the words being spoken and the subtitles appearing on screen.

Average latency has reduced by 0.6 seconds since April-May 2014, from 5.7 seconds to 5.1 seconds in October-November 2014. However, latency remains significantly above the maximum three second delay Ofcom recommends. 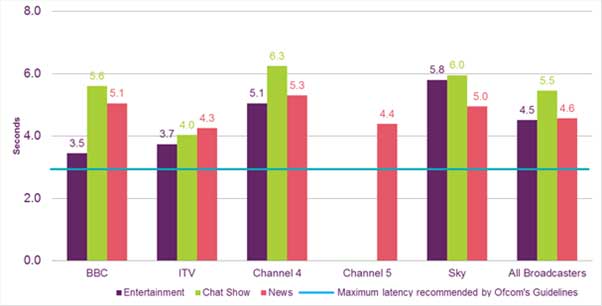 High levels of latency mean that subtitles do not keep pace with what is being said on screen.

In programmes that involve switching between speakers and scenarios, such as BBC’s The One Show or Channel 4’s Sunday Brunch, high levels of latency can make it impossible for viewers to follow who is speaking.

With the exception of S4C, UK broadcasters have not yet explored how inserting a short delay in broadcasting programmes that are subtitled live could reduce high levels of latency. Broadcasters in the Netherlands and Belgium routinely use short delays in live subtitled programmes to reduce latency and improve accuracy.

Ofcom will also ask broadcasters to consider re-editing subtitles that originally appeared live but are then repeated on time-shifted channels to reduce latency and improve accuracy of subtitles.

Ofcom will assess progress made on reducing levels of latency at the end of the year.

On average, subtitles are being delivered at the recommended speed: below 180 words per minute (wpm). However, Ofcom found nearly all the programmes analysed for this research were affected by short bursts of subtitles exceeding 200 wpm, making it difficult for viewers to follow them.

To understand the potential impact of short bursts of rapid subtitles, accuracy measures were adjusted to treat subtitling at speeds above 200 wpm as an error. Subtitle accuracy then began to fall below 98% across two thirds (68%) of the programmes analysed.

Ofcom has asked broadcasters to tackle the issue of subtitles being broadcast too quickly and will assess the progress made at the end of the year.

Claudio Pollack, Ofcom’s Content and Consumer Group Director, said: “Broadcasters are committed to delivering the best possible TV to all their viewers and we welcome their collaboration on this two year project.

“Improvements in live TV subtitling are being made but it’s clear there’s more to do. Broadcasters now need to explore new and innovative ways of consistently delivering high-quality subtitles to the millions of viewers who use them.”

The final report is due to be published in October 2015, after which Ofcom will evaluate the progress made and consider whether any regulatory changes are necessary to ensure viewers benefit from high quality subtitling.