Ofcom has today set out detailed plans for improving access to Openreach’s infrastructure, making it cheaper and easier for competing providers to connect their own fibre broadband directly to homes and offices.

Network competition can deliver significant benefits to consumers through choice and innovation, which can deliver higher quality and lower prices. Today’s measures are designed to spur investment in the next generation of ultrafast internet connections, and reduce the country’s historical reliance on Openreach – the network business within BT Group.

Ofcom’s plans will make it quicker and easier for BT’s competitors to build their own fibre networks all the way to people’s doorsteps using Openreach’s existing telegraph poles and ‘ducts’ – the small, underground tunnels that carry telecoms cables.

The main proposals, announced today, are:

“This will put other providers on a level playing field with BT, so they have the confidence to invest in their own full-fibre networks.”

Getting ready for a fibre future

The UK compares well with major European peers for the availability of broadband connections involving some form of fibre-optic cable, such as fibre running to the street cabinet. However, Ofcom remains concerned that the UK has very low coverage of full-fibre broadband, where cable and fibre lines connect directly to homes and offices.[2]

BT’s competitors have raised concerns about the costs and time required to build these networks. To address this, Ofcom committed to lower these hurdles by improving access to Openreach’s existing infrastructure.

Reusing existing underground ducts can significantly reduce the time it takes to roll out a new network. For example, while it can take days to build 200m of duct using traditional construction methods, fibre cables could be installed in the same length of existing duct in a matter of hours.

Since Ofcom outlined initial plans in December, Openreach has made the process for accessing its ducts and poles more efficient, following a trial last year with five other telecoms companies. Other providers now carry out their own work on the infrastructure, which has helped reduce delays.

However, there is more to be done. Ofcom plans to require Openreach to ensure its existing network of ducts and poles is ‘ready for use’. This means it would have to repair faulty infrastructure and clear blocked pipes on request, within a timeframe agreed with its customers.

Ofcom wants to ensure all providers can lay fibre in BT’s ducts as easily as BT itself. So we intend for BT to recover related costs, such as repairing ducts, in the same way it recovers these costs for its own deployments – for example, by spreading them across all the services that make use of the duct.

If a telecoms provider wants to build its own ultrafast network for consumers, but needs additional revenue to enable the investment, Ofcom is proposing that the company should also be able to use BT’s infrastructure to provide ‘leased lines’ – dedicated, high-speed cables used by large businesses. This can help strengthen the business case for new investment.

For around half of UK homes, the final connection between the customer’s home and the network is a ‘dropwire’ from a nearby telegraph pole.

Companies wishing to connect fibre directly to premises can face problems, such as insufficient space on BT’s poles, which often take time and money to resolve. So Ofcom is proposing that BT must ensure capacity is available on its telegraph poles for additional fibre cables that connect buildings to the network.

Ofcom has told Openreach to provide comprehensive data on its network of ducts and poles – a ‘digital map’ of the UK to allow competitors to plan and deploy their own advanced networks.

Openreach recently launched this as an online database. The new tool shows other telecoms providers the exact positon of its ducts, poles and chambers, together with an indication of available duct capacity.

While this is welcome progress, we want Openreach to make its digital map tool easier for other providers to use.

Today’s proposals form part of Ofcom’s Wholesale Local Access Market Review for the period from April 2018 to March 2021.[3] The consultation closes on 15 June 2017, and Ofcom expects to publish its final decisions in early 2018, with new rules taking effect on 1 April 2018.

We are also considering changes to Openreach’s rental charges for accessing its duct network, and we expect to publish specific proposals on this in the summer. 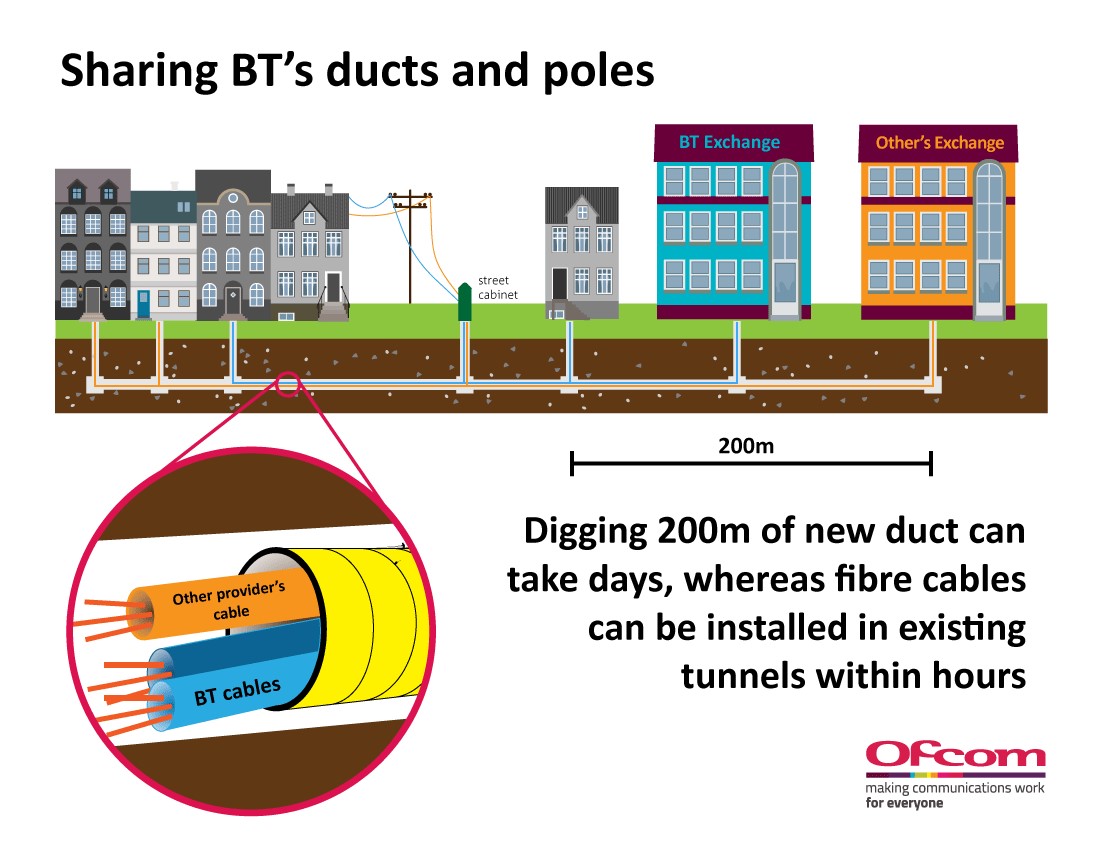