Northern Ireland has become a nation of TV binge viewers, Ofcom research reveals, with eight in ten (83%) adults ever watching multiple episodes of their favourite shows in a single sitting.

The findings are part of Ofcom’s annual Communications Market Report 2017, which reveals  an increasingly interconnected Northern Ireland, where the internet is now available and accessed through our TV as well as smartphones and tablets.

More than three-quarters of adults (76%) in Northern Ireland now own a smartphone, and nearly six in ten (58%) say their smartphone is their most important device for going online, compared to just over four in ten in the UK as a whole (42%). Ofcom’s research also reveals a rise in tablet ownership, with three in five households (62%) now having one.

How we watch TV programmes is also changing; one-third (33%) of households in Northern Ireland now have a smart TV. That’s lower than the wider UK average but almost double what it was last year. Four out of five homes (79%) have a fixed-line broadband connection.

More than eight in ten (85%) people say they enjoy the ability to watch what they want, when they want. Two-thirds (65%) of people are drawn to watching programmes on-demand, simply to avoid adverts.

Services from the public service broadcasters are the most popular ways of watching on-demand and streaming programmes among adults in Northern Ireland: 65% use the BBC iPlayer and 44% use the ITV Hub. But, significant numbers are also using YouTube for watching programmes and films (27%), while 28% now use Netflix and 16% use Amazon video. 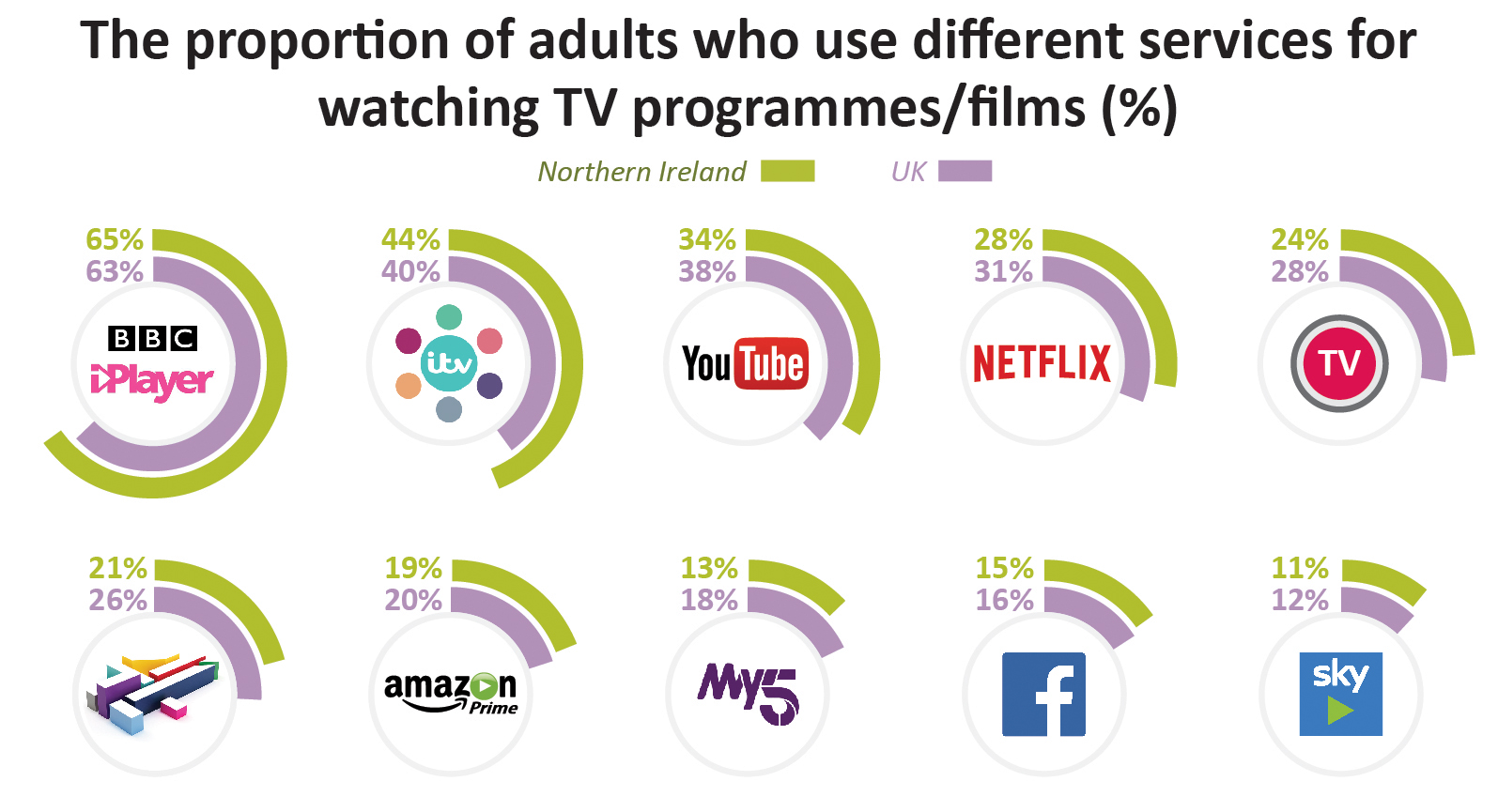 The growing popularity of these services means watching multiple episodes back-to-back – or ‘binge watching’ – is now hugely popular, with 83% of people in Northern Ireland saying they have done this, and a third (32%) doing so every week.

Binge-viewing has such a strong allure that many viewers say they don’t intend to do it, but the pull of the next episode keeps them tuned in. For nearly four in ten (39%), the temptation to watch another episode has cost them sleep and left them feeling tired.

Perhaps as a result, one in three (36%) binge viewers are trying to cut down their TV viewing in some way. These include rationing their viewing (22%) or finding an alternative hobby (8%). For 2%, the solution was to cancel their subscription service.

Ofcom’s report also looks at people’s take-up and usage of technology across a range of sectors, from TV and radio through to post, telecoms and the internet.

People in Northern Ireland now spend more than 20 hours every week online, and younger people are far more likely to be online than the over-65s. People in households with children are also more likely to have an internet connection than those without children (90% vs. 72%).

more time watching live TV (an average of 3 hours 36 minutes a day) than engaging in any other communications activity.

Pay-TV services from Sky, Virgin Media, and BT are also popular, with 64% of households in Northern Ireland having paid-for channels delivered by satellite, cable, broadband or Freeview top-up services. However, this is down 10 percentage points on the previous year.

Ofcom’s research also shows that people continue to turn to TV first to keep-up with the latest news. More than seven in ten adults (72%) in Northern Ireland say TV is the most important source of news in Northern Ireland, followed by radio (12%) and websites or apps (7%).

Programmes with a local flavour are popular with viewers in Northern Ireland.

Listening to the radio continues to play an important part in our lives, and nine in ten people in Northern Ireland tune in every week. On average, we listen to more than 20 hours of radio every week.

People in Northern Ireland are more likely to tune into local BBC and commercial stations than listeners elsewhere. These stations account for 60% of listening, compared to 36% for the UK as a whole.

Although digital radio ownership is lower in Northern Ireland than in other UK nations, ownership has increased and more than a third of households now have one (37%, compared to 57% across the UK). Listening to digital (either through a radio, online, or on the TV) accounts for a third of people’s total listening, with the remainder (70%) tuning in on FM or AM.

Jonathan Rose, Ofcom Northern Ireland Director, said: “Technology has revolutionised the way we watch TV. The days of waiting a week for the next episode are gone, with people finding it hard to resist watching multiple episodes around the house or on the move.

“But live-TV still plays a critical role as a provider of news. Despite the increasing popularity of websites and apps, it is still the most important source of news for people in Northern Ireland.”