Broadband shoppers must receive better information about speeds, before they commit to a contract, under new protections announced by Ofcom today.

In future, providers will always have to give a minimum guaranteed speed to a potential customer at the point of sale. If that customer’s speed then drops below the promised level, broadband firms will have one month to improve performance, before they must let customers walk away penalty-free.

This right to exit a contract will also apply, for the first time, to landline and TV packages bought together with broadband. So, customers won’t be tied to a TV contract bought at the same time as their broadband, if speeds fall short of what was promised, and they decide to leave.

As an extra protection, internet providers must in future provide more realistic peak-time speed information upfront, which reflects the fact that broadband is typically not as fast when more people are online, during the busy periods of 8-10pm, or 12-2pm for businesses.[1]

This is how the new requirements will work: 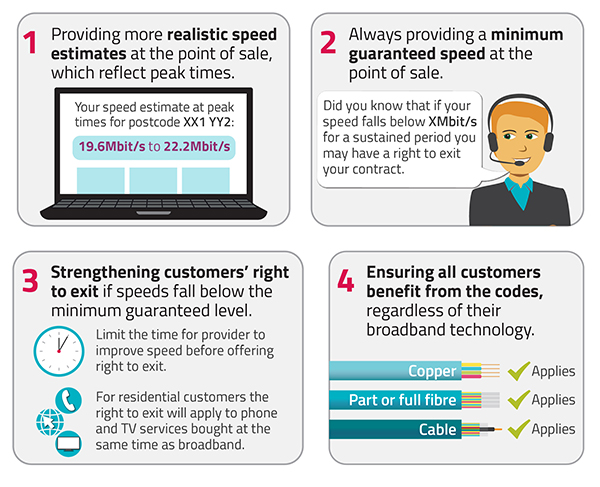 Today’s measures will be introduced by strengthening Ofcom’s codes of practice on better broadband speeds information.[2]

Implementing these reforms will require providers to make major changes to their systems, develop new speed testing methods, and train staff. Providers have a maximum of 12 months to make these changes before the new requirements come into force for services purchased from 1 March 2019.

Before then, people can find out more about their rights under existing protections on Ofcom’s website, as well as practical tips for improving broadband speeds.

“These protections will close the gap between the broadband speeds people are sold, and what they actually receive. And to give people extra confidence, we are making it easier to walk away – without penalty – if companies fail to deliver.”

Alex Neill, Which? Managing Director of Home Products and Services, said: “Consumers have told us that they feel confused about the broadband speeds they are likely to get and the service they pay for, so further steps to help inform customers and empower them to walk away without facing a penalty are welcome.

“Providers signed up to the code need to move quickly to implement these changes, so that broadband customers are given a realistic expectation of the speed they should experience before they commit to a contract.”

At the moment, broadband customers can exit their contract if speeds fall below a minimum guaranteed level, and their provider is unable fix them. But providers currently have an unlimited amount of time to resolve the problem before letting you leave.

Under the new requirements, providers will have 30 calendar days to improve speeds before they must let you walk away without penalty, and this protection will now also apply to cable broadband customers, who can experience particularly wide variations in speeds during peak times.

Today’s measures are part of a series of initiatives to give people more confidence when choosing their broadband supplier. Other actions Ofcom is taking on behalf of  consumers include revealing the best and worst providers for service quality, automatic compensation when things go wrong, and strengthening the general rules all providers must follow.[3]

Some of the findings were positive: for example, almost all telephone calls led to a speed estimate being given. However, there was significant room for improvement in areas such as providing information on broadband speeds without being prompted.

We have recently required the code’s signatories to set out the steps they are taking to ensure better information is provided to customers. Ofcom will also monitor compliance with the new requirements announced today, and we intend to publish a report on companies’ performance the year after implementation.