Most complained about TV programmes of 2018

Celebrity Big Brother was the television programme that attracted most viewer complaints to Ofcom in 2018.

During 2018, Ofcom received almost 56,000 complaints about programmes from viewers and listeners.1 The figures reveal that the ‘top 10’ most complained about television shows together prompted more than 47,000 audience complaints to Ofcom – accounting for 85% of the total for the year.2

Ofcom is responsible for securing standards on television and radio to protect audiences from harm. Each complaint made to Ofcom is carefully assessed against our broadcasting rules to determine whether further action against the broadcaster might be necessary. 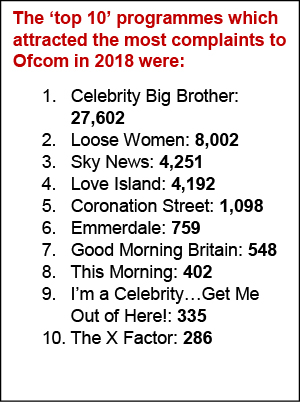 Celebrity Big Brother on Channel 5 attracted the most complaints in 2018 (27,602). The majority related to an allegation of physical abuse made by Roxanne Pallett against Ryan Thomas.

Loose Women on ITV attracted the second highest volume of complaints this year (8,002). The majority related to an interview with guest Kim Woodburn.

Ofcom is investigating both programmes to determine whether potentially offensive content was editorially justified and placed into appropriate context.

ITV reality shows Love Island, I’m a Celebrity…Get Me Out of Here and The X Factor also featured in the top 10 (ranked 4th, 9th and 10th respectively), along with storylines on Coronation Street (5th) and Emmerdale (6th) which prompted viewers in their hundreds to get in touch with Ofcom. Sky News (3rd), Good Morning Britain (7th) and This Morning (8th) complete the rankings.

With many complainants now also taking to social media to voice their opinions, many of the programmes that feature in Ofcom’s ‘top 10’, are also among the ‘top tweeted’ programmes of the year, according to Kantar Media research.

“Viewers are as passionate about what they watch as ever, discussing programmes with their friends and family, and with other people on social media. They complain to us when they think programmes have fallen below the standards they expect, and we carefully assess each and every complaint we receive.

“This year, we’ve taken action on many occasions where programmes have fallen short of the standards required by our rules.”

Viewers and listeners can complain to Ofcom about content on the TV, radio and video-on-demand services we regulate. Complaints, which can be submitted by phone, online or by post, are each carefully assessed against our broadcasting rules.3

This year, Ofcom’s Content Standards team assessed almost 56,000 audience complaints, and reviewed around 8,200 hours of footage and audio to determine whether our broadcasting rules might have been broken.

Ofcom launched 137 investigations into TV and radio programmes in 2018. Of the 129 investigations concluded this year, we found our broadcasting rules were broken in 80 cases.4Sixteen cases were resolved, while 33 cases were found not to have breached our rules.