Ofcom reports on performance of the BBC

The BBC is generally delivering its remit for audiences, but it must go further in areas such as transparency, taking creative risks and attracting young people – Ofcom’s annual report on the corporation has found.

Our report assesses how the BBC is performing against a backdrop of significant change in the media landscape. Major growth in the use of online and connected devices, as well as superfast broadband, have enabled global online players such as Netflix and Amazon rapidly to establish themselves in the UK.1 YouTube now reaches more than 44 million people per month2, while live TV viewing has fallen for six successive years.3

But the BBC continues to play a central role across TV, radio and online platforms. More than nine in ten adults consume BBC content each week; on average, we estimate that people spend 2 hours 44 minutes with the BBC every day.

Audience satisfaction with the BBC is relatively high. Three quarters say they are satisfied with BBC radio (74%) and BBC websites and apps (75%), and just over two thirds with BBC TV (68%). A majority also agree that the BBC is delivering its ‘public purposes’ well.4

Where the BBC should go further

But Ofcom has identified four main areas where the BBC should go further to deliver for audiences:

Transparency. As a publicly-funded organisation, with a privileged status in the UK broadcasting sector, the BBC needs to be transparent and accountable. This does not always happen, particularly when it is proposing to change or introduce public services. For example, the BBC invited meaningful feedback last year on its plans for a new BBC Scotland channel. But more recently, it has not provided enough information on planned changes to the iPlayer. This lack of transparency could disadvantage other UK media, meaning audiences could ultimately lose out. The BBC Board should drive improvements here.

Original UK programmes. Viewers and listeners value original programmes made for them. To remain distinctive, amid increasingly strong competition for TV audiences, the BBC should maintain its commitment to original UK content that reflects UK stories. Within the BBC’s funding settlement for this Charter, the BBC will need to be more innovative and take more risks – both in the type of UK content it commissions, but also how it is made, and with whom. This may require a significant change in approach for the BBC, as less than six in ten (57%) BBC TV viewers consider it to be taking creative risks and innovating in its programmes.

Attracting young people. The BBC is not reaching enough young people, who are turning away from BBC TV and radio services. We estimate that, on average, young people spend around one hour and 20 minutes with the BBC every day – half as much time as audiences overall.

In part, this reflects a wider shift in their viewing habits. But young people spend almost as much time watching ITV on a TV set, for example, as BBC One (compared to viewers as a whole, who spend around 50% more time watching BBC One than ITV). Few young people choose to watch BBC Three online. Younger people are also more likely to listen to commercial, rather than BBC, radio stations.

The BBC recognises it needs to do more, and more quickly, to reach young people who are critical to its future success. As well as providing content that appeals, it needs to find new ways of reaching younger people that suit and reflect their viewing and listening habits.

Representing and portraying UK society. Alongside today’s annual report, Ofcom has published the conclusions of a review of Representation and Portrayal on BBC Television. While viewers told us that the BBC – and TV in general – represents a wider mix of people than it used to, some people still feel less visible, or portrayed in ways that are narrow or inauthentic.

For example, some people feel that older women are featured less frequently on BBC TV outside of a narrow set of genres such as soaps, chat shows and dramas. Some disabled people said the BBC, and TV in general, tends to focus on their difficulties and struggles, while portrayal of mental health issues was limited. People also want to see greater representation of the UK outside of its major cities, and national identity to be portrayed without stereotypes.5

Sharon White, Ofcom Chief Executive, said: “Viewers and listeners have told us the BBC is generally doing a good job. But it can go further in some areas. We expect the BBC to do more in attracting younger people, being bolder in the programmes it makes, and making original UK programmes that accurately reflect the lives of people around the UK.”

We will monitor the BBC’s performance in these areas closely over the course of the year, and report on its progress in subsequent annual reports. If we have concerns about the progress made, we will take further action.

Today’s report also finds that, in news and current affairs, the BBC is performing well in many respects. More than seven in ten people rate the BBC highly for high-quality, trustworthy, and accurate news that helps them understand the world. More than eight in ten rate the BBC’s current affairs TV programmes highly for providing high-quality commentary and investigative journalism.

Given its growing importance in an increasingly complex news landscape, we will review the BBC’s news and current affairs output, and how it can continue to be a trusted destination for audiences. This will inform our view of how the BBC delivers impartial news and information – one of its public purposes – over the Charter period.

Under the BBC Charter and Agreement, set by Parliament, Ofcom has responsibility for assessing and reporting annually on the BBC’s compliance with its regulatory obligations and its overall performance. To help us do so, we set performance measures for the BBC. These provide a framework for holding the BBC to account for the promotion of its public purposes. We are required to publish BBC performance data annually and have included it as an annex to the Annual Report. This includes a summary of our key evidence base, along with an assessment of the BBC’s performance (PDF, 1.1 MB) by public purpose.

4. The Charter sets five ‘public purposes’ for the BBC. Ofcom’s job is to hold the BBC to account on the first four, as the fifth relates to international services that we do not regulate, such as the World Service. The five public purposes are:

5. Ofcom’s quantitative research shows that people not in work or in lower-skilled occupations consistently rated the BBC’s performance in representing and portraying them and the places they live significantly lower than the overall population (by 7 or more percentage points on each question). People with mental health conditions are less likely (38%) than the overall UK population (48%) to think that the BBC offers authentic portrayal of people like them (BBC Performance Tracker October 2017 – April 2018 (PDF, 13.5 MB)). 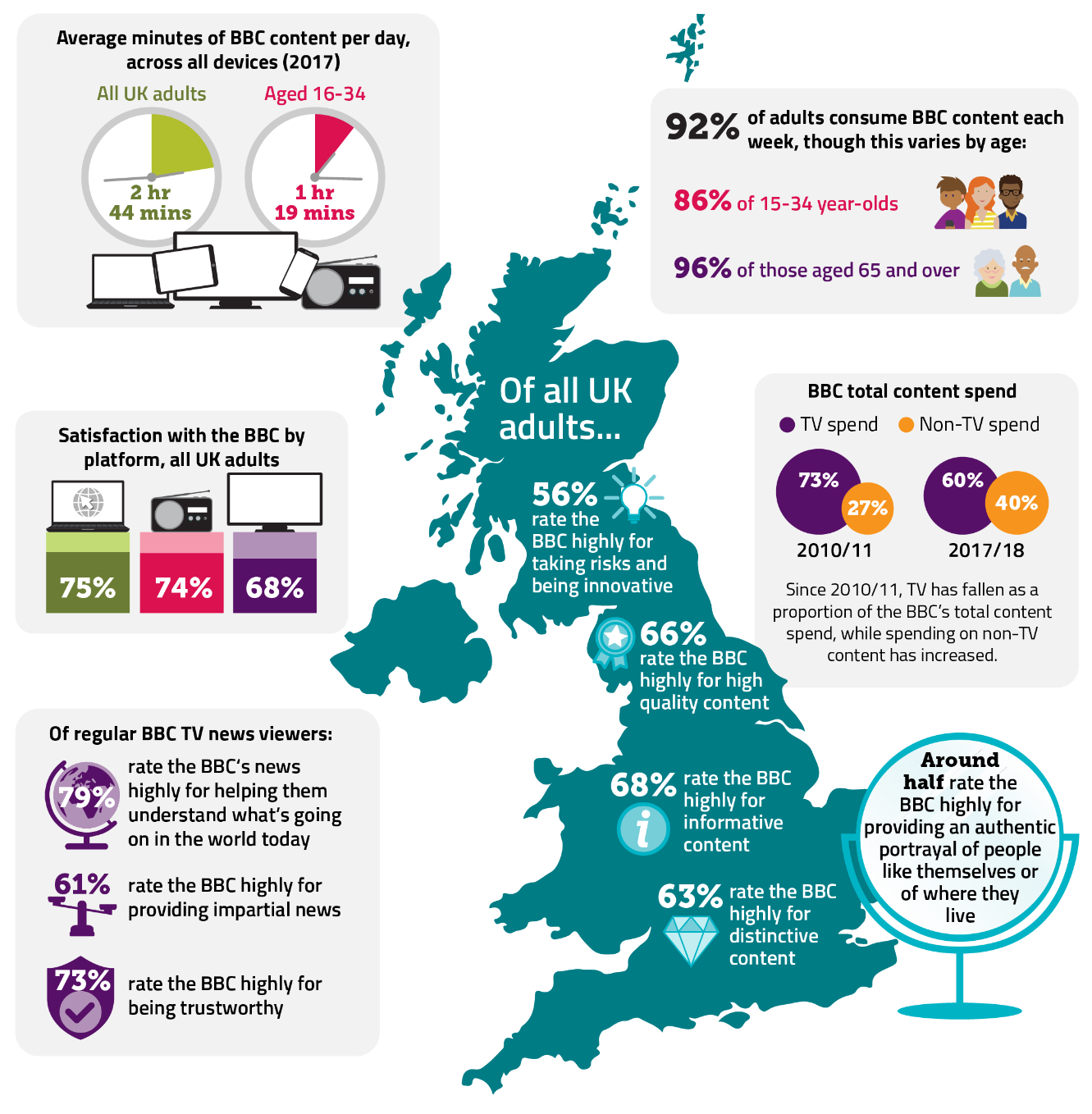