The UK’s television industry is strongly skewed towards people from privately-educated backgrounds, according to Ofcom research on the sector’s diversity.

Our annual Diversity and Equal Opportunities in Television report [1] examines the social and economic background of the television industry for the first time this year. It also reports on companies’ progress in improving the representation of workers including women, disabled people and those from minority ethnic backgrounds.

The research helps Ofcom meet its legal duty, set by Parliament, to promote equality of employment opportunity in the broadcasting sector.

Fourteen major broadcasters – including the BBC, Channel 4 and Viacom (which owns Channel 5) – provided Ofcom with initial information on the social and economic diversity of their organisations.[2] This included the type of schools attended by industry employees, and the occupations and qualifications held by their parents when they were growing up.

This has allowed Ofcom to draw an initial picture of social diversity in UK television, based on responses from 10,188 industry employees – or around 30% of the UK-based television workforce:[3]

The report details the steps broadcasters are taking to promote social inclusion in their organisations – including offering apprenticeships, internships, work-experience placements and early-career support for people from low-income backgrounds

Last year, we were encouraged by broadcasters’ progress on diversity, particularly in further improving their understanding of the make-up of their workforces. But while we have more information than we did three years ago,[6] there has been no discernible change in the TV industry’s diversity profile.

Sharon White, Ofcom’s Chief Executive, said: “We want a TV industry where differences are celebrated, and the door is open to all. But the evidence shows that the dial towards full inclusivity is not shifting quickly enough, and we cannot allow progress to stall.

“Broadcasters must redouble their efforts to understand their workforces, examine what is working, and strive harder to attract the most talented people into television – whatever their characteristics or backgrounds.”

Next steps for the TV industry and Ofcom

By 2020, Ofcom is calling on the television industry to:

Ofcom is also taking a range of steps in these areas, including:

We will also be convening an industry event to refresh thinking on diversity and share best practice.

1. Alongside the main summary report (PDF, 2.4 MB), we have published:

Ofcom’s online diversity hub provides further information on the methodology behind our reports, including the legal basis for requiring this information from broadcasters. 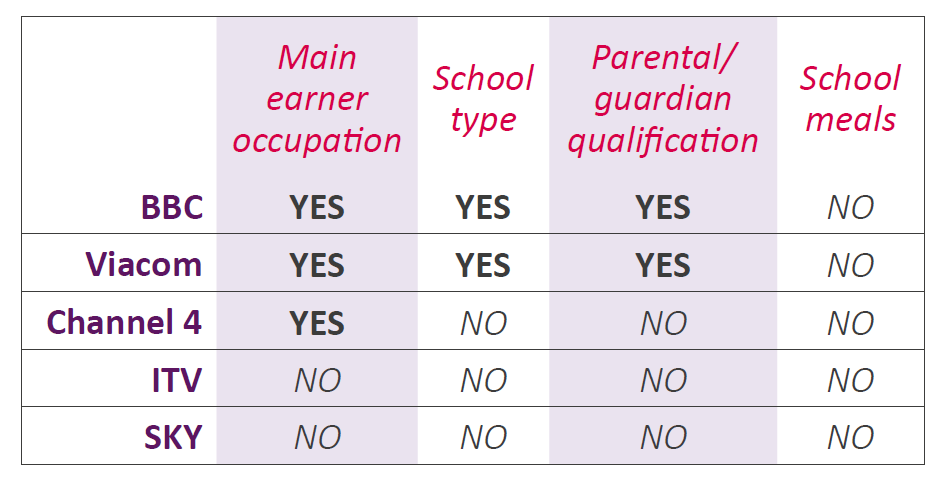 5. We asked about the occupation of the main earner in the employees’ household when the employees were aged 14. This is the broadcasters’ agreed primary indicator of the social mobility of employees, as recommended by The Bridge Group. Professional categories include roles such as senior manager, teacher, nurse, social worker, musician, police officer, accountant, solicitor, medical practitioner and scientist.