Ofcom’s annual Connected Nations report analyses the availability of broadband and mobile services in Scotland and across the UK nations. This year’s report highlights further progress from industry in rolling out their networks withavailability of full-fibre more than doubling in Scotland 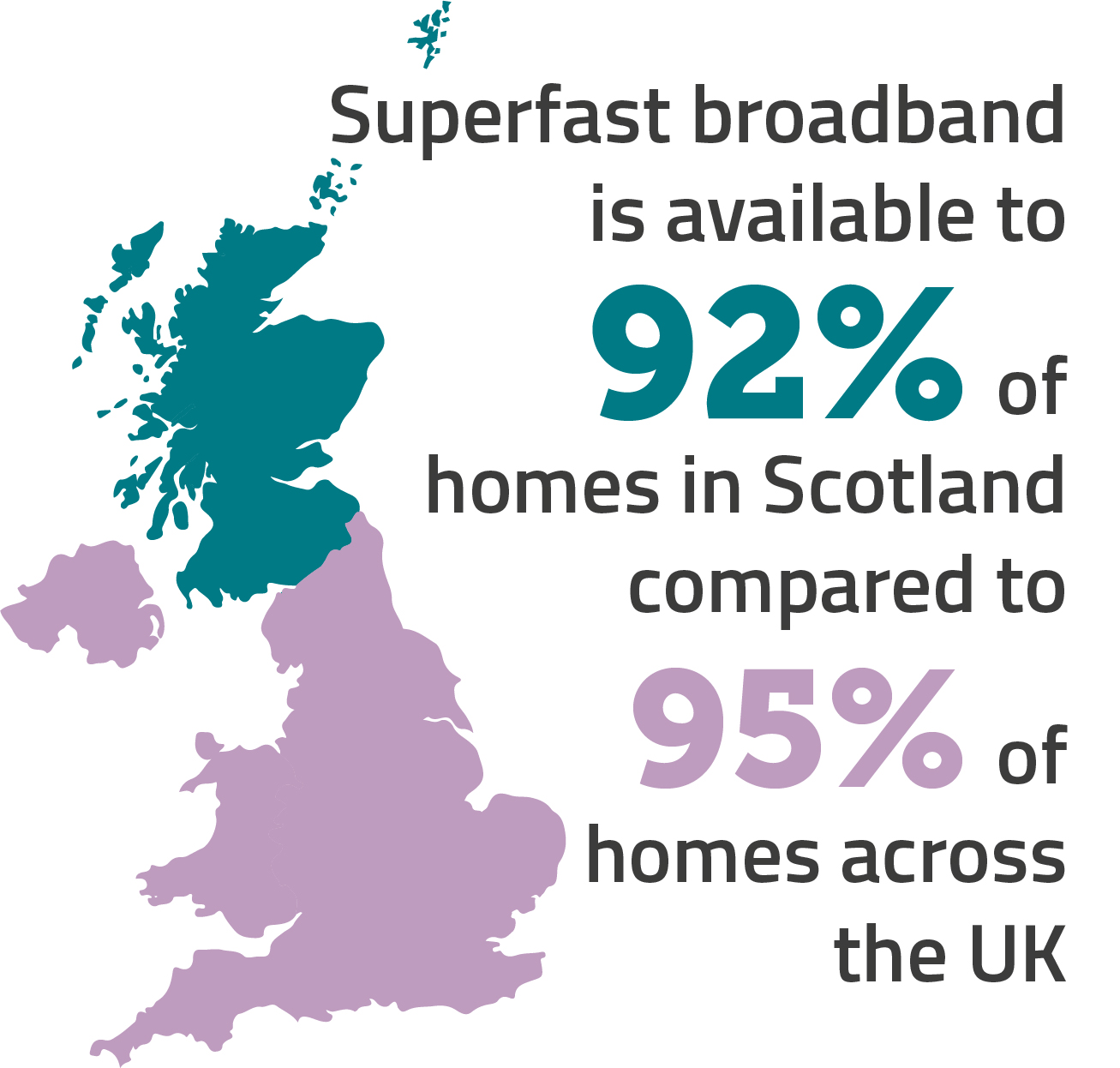 The vast majority of homes in Scotland (92%) can now access superfast broadband (delivering speeds of at least 30Mbit/s). This has increased by over 89,000 since last year. [1]

However, in areas where superfast broadband is available, just under half (48%) of those properties use superfast or ultrafast (at least 300 Mbit/s) services. So millions more could get faster internet by upgrading today, without paying more. [2]

Ofcom’s Boost your Broadband website allows people to easily check which broadband services are available in their area and get advice on how to find the best deal for them.

Over 200,000 homes and businesses in Scotland (8%) can now get full fibre broadband which offers download speeds, of up to one gigabit per second (1 Gbit/s).  This has increased sharply from 3% in 2018, with 150,000 more premises now able to access the latest broadband technology. However, this is still below the UK average of 10%. Ofcom will shortly publish new plans to promote further investment in fibre networks – including in rural areas.

While superfast coverage continues to improve, there remain premises that do not have access to decent broadband. Including improvements from BT/EE’s FWA, around 30,000 homes and businesses in Scotland are unable to get a broadband service that delivers a download speed of at least 10 Mbit/s and an upload speed of at least 1 Mbit. This has fallen significantly from last year due to the increased availability of wireless broadband services.

In today’s smartphone society, being able to make calls and get online on the move is crucial to people’s personal and working lives. 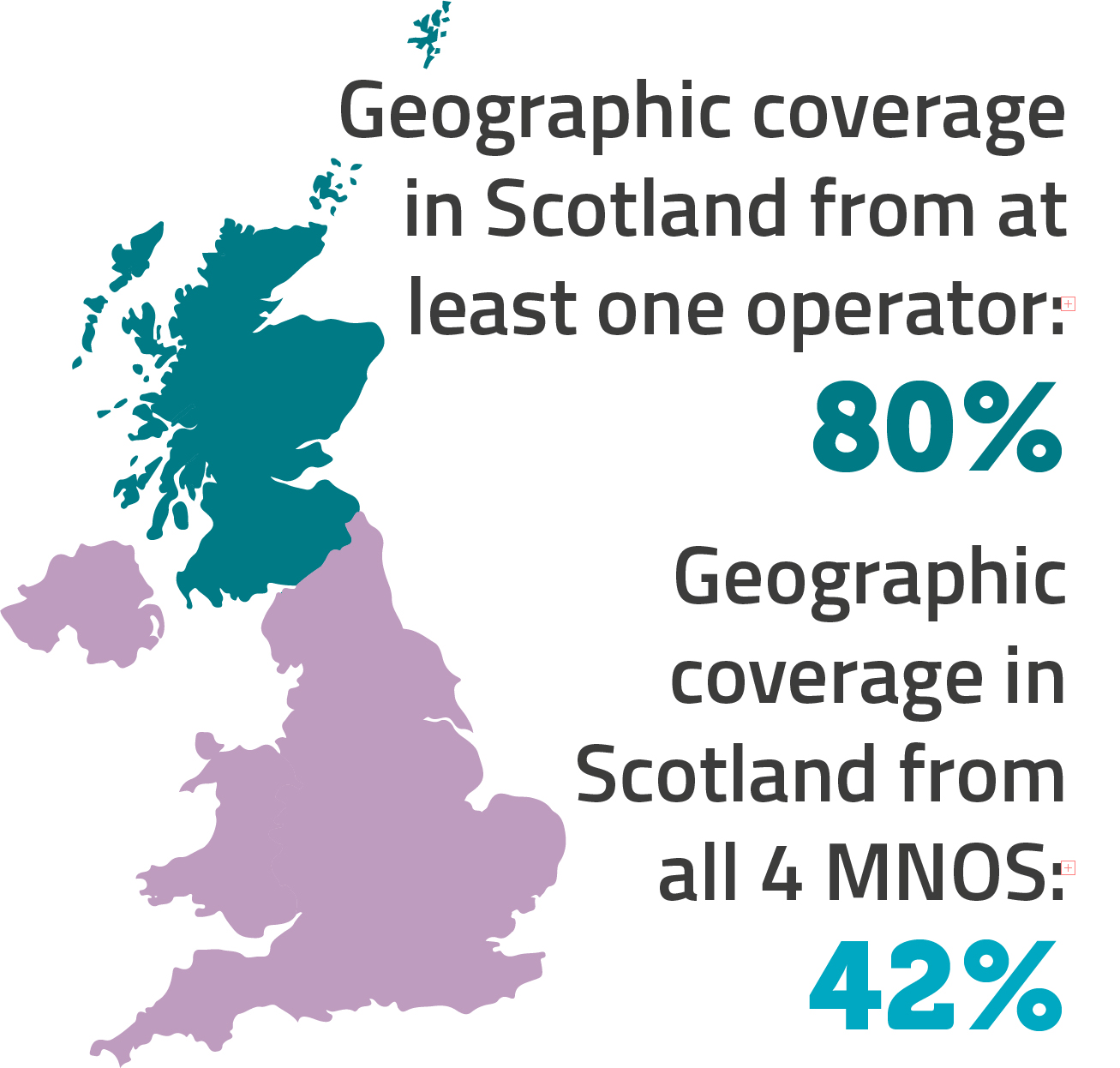 While most of Scotland (80%) can get coverage from at least one mobile company, there are stark differences in the level of choice available to customers in urban and rural areas, with only 42% of Scotland’s land area covered by good 4G reception from all mobile companies.

Around 20% of Scotland does not have good 4G coverage from any mobile company. The areas with limited mobile coverage in Scotland tend to be sparsely populated rural areas where the commercial incentives to provide coverage are lower.

However, rural mobile coverage is set to increase as a result of an industry project announced in October. Mobile operators have worked with the UK Government and Ofcom on a plan to introduce a ‘shared rural network’. The UK Government has indicated that this will see high-quality 4G coverage reach 85% of Scotland by 2026, as mobile companies share their existing masts and invest in new sites. We have provided technical advice on the plans. In addition, the Scottish Government’s 4G infill programme (SG4i) is also seeking to address mobile not spots across 49 sites in Scotland.

5G – the fifth generation of mobile technology – also launched in the UK this year, with all four mobile networks rolling out 5G across a total of 40 UK towns and cities, including Edinburgh and Glasgow.

“But despite this good progress, there is more to do to bring all parts of the country up to speed – particularly in Scotland’s rural areas. So we’re working with industry and the UK and Scottish Governments to help bring better services to people who need them.”