Around half of homes in Northern Ireland now subscribe to TV streaming services, according to a major Ofcom report revealing rapid shifts in our viewing habits.

While traditional TV still accounts for most TV time in Northern Ireland (82%) and remains the most popular place for people to keep up with the latest news, viewing continued to decline.

The decline is even steeper among children and younger viewers in Northern Ireland. In 2018, youngsters aged 4 to 15 watched one hour and 13 minutes of broadcast TV each day, down from almost three hours in 2010 (-59%).

However, viewing to other services on the TV set - such as streaming or gaming increased by five minutes to an average of 42 minutes per person per day in 2018.

TV is still the “go to” place for news

Despite the rise in online viewing, television remains the most-used platform for news by people in Northern Ireland. Television channels make up five of the top ten most-used news sources in 2019, with UTV and BBC One the most popular overall.

Social media sites are also highly used for news in Northern Ireland; over a third (35%) of people now say they use Facebook for news, while Twitter, WhatsApp and Instagram also appear in the top 20 most-used news sources.

Top 20 sources of news in general in Northern Ireland: 2019 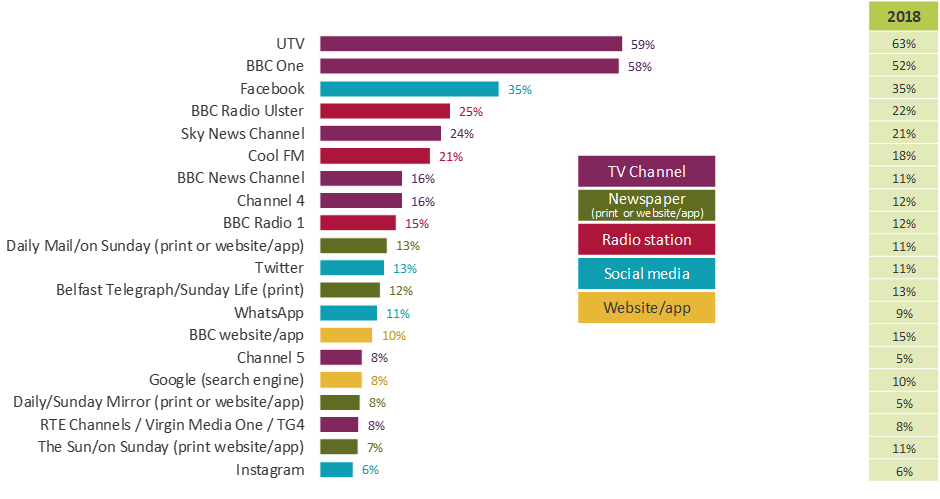 This will involve broadcasters, production companies, governments, Parliaments, industry bodies, viewers’ groups and national and regional representatives on the wider questions around the future of public service media.

Ofcom is playing a central role in driving the debate, drawing on a range of views, evidence and research. By the end of the year, we will publish our assessment of the state of public service broadcasting, identifying areas of risk and potential opportunities.

Jonathan Rose, Director of Ofcom Northern Ireland, said: “The way we watch TV is changing faster than ever before.  In the space of seven years, streaming services have grown from nothing to reach around half of Northern Ireland homes.  But traditional broadcasters, who produce brilliant Northern Ireland and UK programmes, still have a vital role to play.  We want to sustain that content for future generations, so we’re leading a nationwide debate on the future of public service broadcasting.”

Other findings from the report include:

Source: BARB. BBC Ulster area, all individuals (4+). The TVR (television rating) is the measure of the popularity of a programme, daypart, commercial break or advertisement by comparing its audience to the population as a whole. One TVR is numerically equivalent to 1% of a target audience.