UK adults spent more time online on desktop, smartphones or tablets in 2020 than comparable European countries, according to Ofcom’s annual study into the nation’s online habits.

UK adults spent more than three-and-a-half hours (217 minutes) online each day in 2020 – more than an hour longer than in Germany and France and 30 minutes more than Spain.[2] 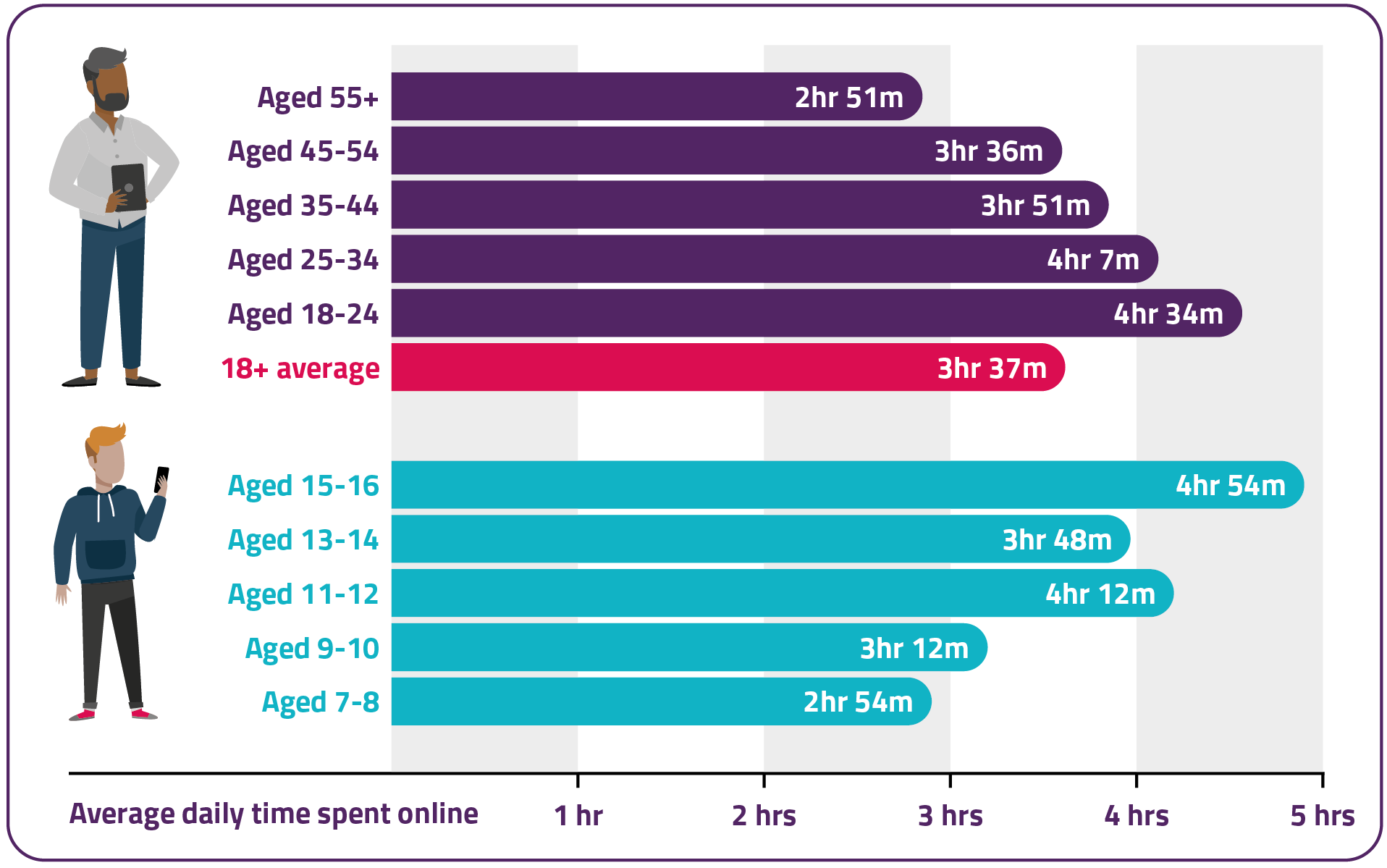 Brits also spent nearly £2.45bn on, and in, mobile apps across last year, with Tinder, Disney+, YouTube and Netflix topping the list.[3]

With high street shops forced to close, UK online shopping sales rose by half (+48%) to nearly £113 billion in 2020.[4] The online stores of food and drinks retailers saw the biggest increase in sales (+82% on 2019 levels), while household goods also surged, due to heightened interest in home improvements (+76%).[5]

Children’s online purchasing power is also growing, enabled by digital pocket money apps and pre-paid debit cards tailored for youngsters. Since the spring 2020 lockdown, teenagers have been spending more money online than offline, and this trend has continued into 2021 (68% online vs. 32% offline in March 2021).[6]

Around one in eight online adult Brits (12% or six million) and more than one in five (22%) of those aged 15-34 said they used an online dating service before the spring lockdown in 2020. Tinder was the most popular dating app among young online UK adults - visited by 11% of 18-24s in September 2020 – while Plenty of Fish was most popular among the 45-54 age group. Lockdown saw an increase in romance scams, with money lost to fraudsters increasing by 12% to £18.5m.

Social video sites and apps are used by almost all (97%) UK adult internet users, and by 92% of 3-4 year-olds. Young adults are particularly heavy users of social video platforms, with 18-24s spending an average of 1 hour 16 minutes per day on YouTube in September 2020 – an increase of 11 minutes since 2019.[7]

TikTok experienced huge growth during the pandemic – from 3 million UK adult visitors in September 2019 to 14 million by March 2021. TikTok also saw the biggest increase in daily use among young adults – with 18-24s more than doubling their time spent on it in the year to September 2020 (up from 17 minutes to 38 minutes).

Despite most platforms setting their minimum user age at 13, nearly two-thirds (59%) of UK children use social media by the time they are 11. By age 15, use increases to 95%.

About nine in ten older children (8-15s) say social media helped them feel closer to friends during the pandemic. But a similar proportion of teenagers say it prompts popularity pressures. Two-thirds of boys (67%) and three-quarters of girls (77%) aged 7 to 16 also agree that social media can cause worries about body image.[9]

More than half of 12-15s reported having a negative experience online in 2020. The most common experience (cited by 30%) was someone they didn’t know attempting to befriend them online. A significant minority had seen something scary or troubling (18%), or content of a sexual nature that made them uncomfortable (17%).

Yih-Choung Teh, Ofcom’s Group Director of Strategy and Research, said: “In an unprecedented year, we’ve seen a real acceleration in our migration to online services – which, for many people, have provided a lifeline in lockdown.

“This research is critical to keep pace with these changes in technology, economics and behaviour, as we prepare to take on new responsibilities for regulating online safety.”