There has been a major shift in the UK’s viewing habits, with the number of UK subscriptions to television streaming services such as Netflix overtaking those to traditional pay-television for the first time.

Ofcom research also found spending by the BBC, ITV, Channel 4 and Channel 5 on new, UK-made TV programmes fell to a 20-year low. At the same time, people are spending less time watching television: average daily viewing on the television set fell by nine minutes in 2017 – and is down 38 minutes since 2012.

The findings are part of Ofcom’s Media Nations report, a comprehensive study of major trends in the UK’s television, radio and audio sectors, published today.

The report highlights a shift within the UK television industry, driven by the rise of the major global internet companies and the changing habits and preferences of UK audiences.

Sharon White, Ofcom’s Chief Executive, said: “Today’s research finds that what we watch and how we watch it are changing rapidly, which has profound implications for UK television.

“We have seen a decline in revenues for pay TV, a fall in spending on new programmes by our public service broadcasters, and the growth of global video streaming giants. These challenges cannot be underestimated.

“But UK broadcasters have a history of adapting to change. By making the best British programmes and working together to reach people who are turning away from TV, our broadcasters can compete in the digital age.”

How people are watching TV

The report also shows how increased take-up of superfast broadband and connected televisions is driving changes in how people watch TV.

Across all devices, the UK’s total television and audio-visual viewing in 2017 reached five hours and one minute per day.

The majority of this (three hours 33 minutes or 71%) was broadcast television, with the remainder (one hour 28 minutes or 29%) non-broadcast content such as YouTube and services such as Netflix and Amazon Prime Video.

In contrast, overall sales of physical music formats fell to £470m.The shift away from music ownership towards streaming was reflected by a 25% drop in sales of music downloads.

Radio listening reached a significant milestone in the first quarter of 2018. For the first time, more than half of all listening hours (50.9%) were through a digital platform - DAB, online or through digital TV.

This is being driven by an increase in ownership of DAB sets and the greater choice of national commercial stations now available to listeners. 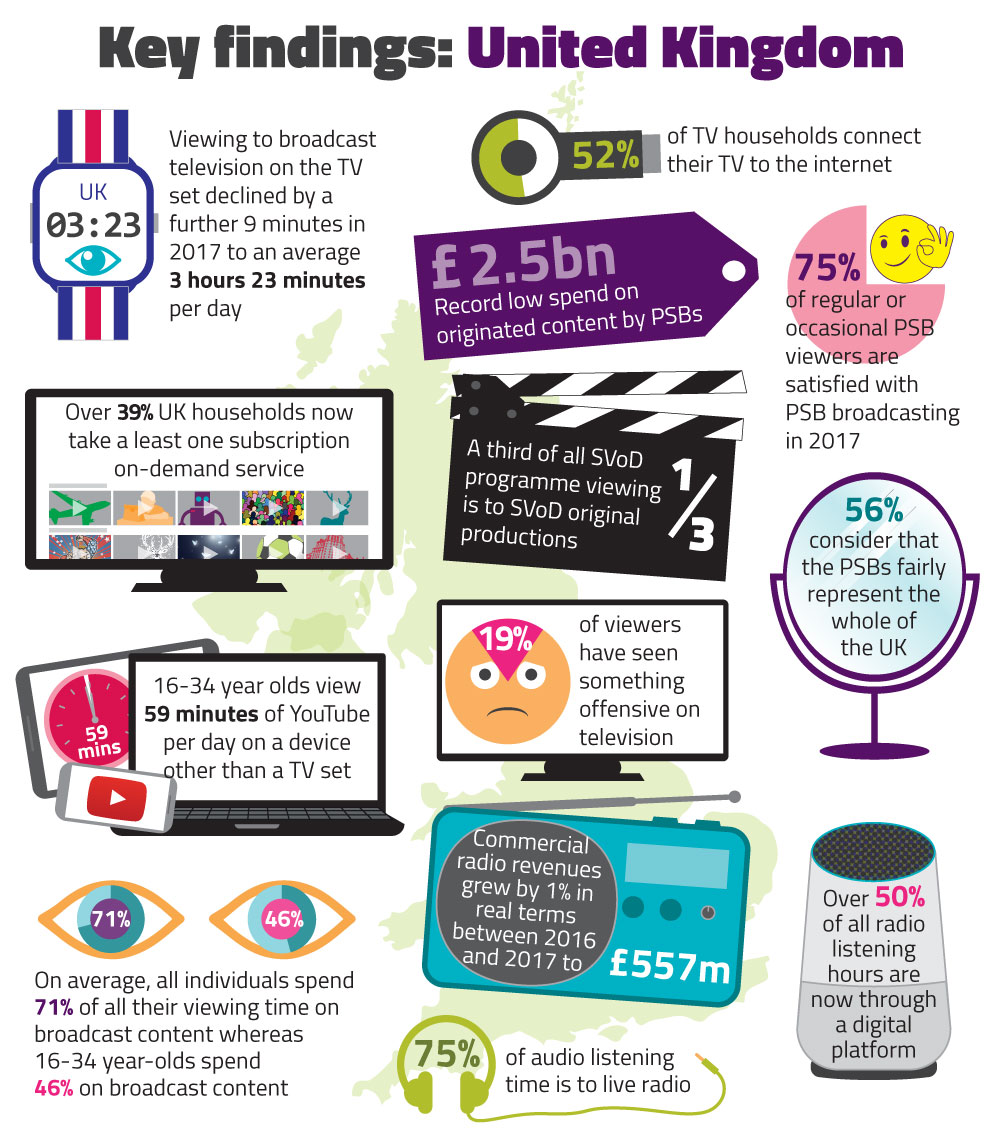