How broadband coverage varies between cities

Some people living in urban areas are still putting up with very low broadband speeds, according to an Ofcom study that reveals a varying picture of coverage and take-up across major cities.

While lower broadband availability, take-up and speeds are commonly associated with rural areas - something Ofcom has researched before - the new study aimed to understand whether cities had similar problems.

How coverage and take-up vary

The research examined 11 UK cities, and found wide variations in the proportion of premises on a relatively slow broadband connection (2 Mbit/s and below). For example, people in Cardiff and Inverness were twice as likely to be on a slower connection than those in London or Birmingham.

Coverage of faster, �next-generation' networks also varied between the cities, though in most it is now around 90%. While almost everyone in Northern Ireland's largest cities had access to superfast broadband, in Glasgow one-in-three people did not.

The findings were not consistent across all of the cities in the study. Many factors may influence the take-up and coverage of faster broadband, including the cost of deployment, the quality of historic infrastructure and local planning rules.

This variation between cities, and their characteristics, underlines the complexity of the challenges they may face in encouraging take-up of superfast broadband. The report recommends that policy makers should take these unique factors into account when addressing barriers to take-up and availability of superfast broadband in different cities.

There are already signs that availability is being addressed in many areas. For example, BT announced in January an extra �50 million investment to bring more fibre to cities.

As part of its study, Ofcom also commissioned case studies in six of the cities to explore how the use and availability of broadband in urban areas varies according to social deprivation. The cities chosen were Belfast, Birmingham, Cardiff, Glasgow, London and Manchester.

The proportion of premises on a relatively slow broadband connection tended to be higher in areas with lower incomes. In Belfast for example, although almost all parts of the city have access to superfast broadband, around 5.9% of connections in the poorest areas were below 2 Mbit/s; but this fell to just 2.2% in areas with the highest incomes.

The results suggest that, in many cases, low incomes may be a barrier to customers choosing services with higher speeds.

The study also found superfast broadband was less-widely available in those parts of the cities with low income. For example, in the most income-deprived areas of Manchester, superfast broadband availability was 80.6%, compared with 86% across the entire city.

In Glasgow, the difference was even more marked. In the lowest income area, 57.8% of premises had access to superfast broadband, which was lower than the city average of 67%.

Claudio Pollack, Ofcom's Consumer Group Director, said: "Access to fast broadband is an important part of modern life, and a source of economic growth and investment across the UK.

"We know from previous research that rural areas often lack fast broadband coverage, something the Government is helping to address with public funding.

"Today's findings suggest that the usage and availability of faster broadband also vary widely between cities. We will carry out further work in this area to help bring faster broadband to UK homes, whether in cities or rural areas." The reports can be found here.

Building on the findings

Ofcom has started a new programme of work analysing the availability of communications services in densely-populated areas. This will look at socio-economic and demographic factors which affect take-up, aiming to understand the characteristics of consumers in cities who are most or least likely to adopt communications services.

Ofcom will publish the findings later in the year, including an assessment of any possible policy implications. 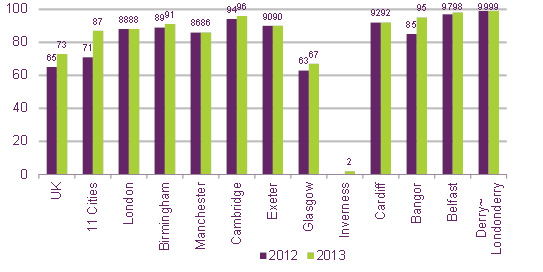 1. The research on the six cities was carried out by Analysys Mason for Ofcom.

2. Levels of income, crime and education were determined with reference to publicly-available Index of Multiple Deprivation data.

3. Ofcom's principle duty is to further the interests of consumers and citizens in communications matters. One of the ways Ofcom does this is to undertake and publish research into the markets it regulates.