Techie teens are shaping how we communicate

A 'millennium generation' of 14 and 15 year olds are the most technology-savvy in the UK, according to new Ofcom research, which shows that after our teens our digital confidence begins a long decline.

Teens born at the turn of the millennium are unlikely to have known 'dial-up' internet and are the first generation to benefit from broadband and digital communications while growing up.

The study, among nearly 2,000 adults and 800 children, finds that six year olds claim to have the same understanding of communications technology as 45 year olds. Also, more than 60% of people aged 55 and over have a below average 'DQ' score.

It shows that we hit our peak confidence and understanding of digital communications and technology when we are in our mid-teens; this drops gradually up to our late 50s and then falls rapidly from 60 and beyond. The study helps support Ofcom's duty to research the markets it regulates and better understand people's technology literacy. 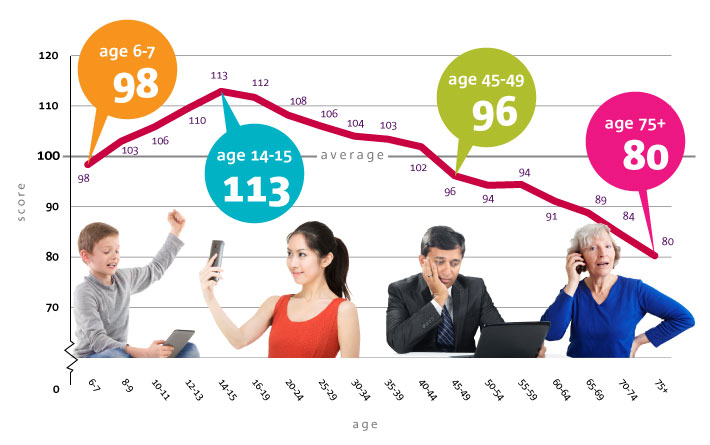 As a result of growing up in the digital age, 12-15 year olds are developing fundamentally different communication habits than older generations, even compared to the advanced 16-24 age group.

Children aged 12-15 are turning away from talking on the telephone. Just 3% of their communications time is spent making voice calls, while the vast majority (94%) is text based - such as instant messaging and social networking.

By contrast, older generations still find it good to talk: 20% of UK adults' communications time is spent on the phone on average. While adults also embrace digital text-based communications, the traditional email is most popular (used for 33% of their time spent communicating) compared to just 2% among 12-15s.

We 're communicating more than sleeping

It's not only younger teens that are making the most of digital communications technology. Ofcom's research shows that the communications habits of adults of all ages are shifting as they embrace newer services and take advantage of portable connected devices.

But because we're squeezing more into our day by multi-tasking on different devices, total use of media and communications averaged over 11 hours every day in 2014. This is an increase of more than 2 hours since Ofcom last conducted similar research in 2010.

Since then, we're even better connected through superfast broadband and 4G mobile, and communicating on the move.

Tied to our tablets and smartphones

Where computer use was traditionally dependent on desktop computers, tablet and smartphone devices are starting to dominate how we work and play. Over four in 10 households (44%) now have a tablet - up from a quarter (24%) a year ago.

Their ease of use and portability appeal to people across generations. More than a quarter (28%) of those over 55 now own a tablet and many use it as their main computing device.

These young adults are glued to their smartphones for 3 hours 36 minutes each day, nearly three times the 1 hour 22 minute average across all adults.

Smartphone take-up has also continued to increase rapidly over the past year, up to six in 10 adults (61%), compared to half (51%) a year earlier. The growth in smartphone use in particular has contributed to people spending an extra 2 hours per day on media and communications since 2010.

We're holding on to our books, CDs and DVDs

Despite the growth in digital media and devices, people are holding on to popular forms of physical media such as books, CDs and DVDs.

The average sized DVD and Blu-ray disc collection increased from 45 to 68 discs per person between 2005 and 2014.

Ownership of music CDs varies greatly between age groups. Some 60% of people aged 16-24 were significantly less likely to own music CDs than all other age groups. However, among 45 to 54 year olds, almost nine in 10 (88%) were likely to own a music CD collection.

Six in 10 (60%) workers do some form of work-related communications activity outside of working hours. Emailing is the most common work-based communication activity out of hours, with nearly half (46%) of all workers emailing from time to time, and a fifth (22%) doing so on a regular basis.

Around four in 10 workers are also taking part in work-related telephone calls (41%) and text messages (37%) occasionally outside their working hours.

The largest proportion of work-related communications takes place in the evening at home. Of those people, one in 10 read or send work emails or texts in bed, on waking in the morning or last thing at night.

Communications technology is also shaping our holiday time. The research shows almost a third (32%) of people have made work related calls, sent emails or texts while on holiday, and of those, one in 10 has worked on the beach, or by the pool.

But there is a trade-off. Six in 10 workers say that while they're at work they regularly or occasionally send and receive texts for personal reasons; half of workers use email; while 46% make or receive telephone calls for non-work related reasons. Just over a quarter (27%) catch-up on the sports results at work, while one in five people are shopping online in the office.

Ed Richards, Ofcom Chief Executive, said: "Our research shows that a 'millennium generation' is shaping communications habits for the future. While children and teenagers are the most digitally-savvy, all age groups are benefitting from new technology.

"We're now spending more time using media or communications than sleeping. The convenience and simplicity of smartphones and tablets are helping us cram more activities into our daily lives."

James Thickett, Ofcom Director of Research, said: "While gadgets can prove a distraction, technology is actually improving work-life balance for some.

"Six in ten of us do some form of working outside of normal hours, but the trade-off is that we're making personal calls and doing our life-admin at work."