How do they help?

Smart antenna technology has the potential to significantly increase the efficient use of the spectrum in wireless communication applications in comparison to the existing methods in use. Through intelligent control of the transmission and reception of signals, capacity and coverage in mobile wireless networks can be significantly improved.

Ofcom is researching this area to:

A smart antenna system can be used to add increased spatial diversity (sometimes referred to as SDMA) to reduce interference between users and consequently increase user capacity through dynamic adaptation of the antenna’s radiating properties. Through directing the antenna beam precisely at the user the transmitted power is efficiently used in comparison to a sectored antenna, and the interference situation reduced.

A phased array antenna comprises an array of separate radiating ‘elements’ whose signals, when added together, form a beam. Flexibility and control over the beam shape is achieved through the beamforming process by altering the amplitude and phase of the individual elements.

Phased arrays provide maximum signal in the wanted direction through steering the main beam in a chosen direction whilst ‘nulls’ can be steered in the direction of unwanted transmitters simultaneously. Thus, the antenna can be adapted to give high sensitivity to the signals received from one user whilst suppressing those from other users.

Our work in the area of smart antennas is split into two strands:

Smart antennas are devices which adapt their radiation pattern to achieve improved performance – either range or capacity or some combination of these.

An element of the research work has focussed on a potential use of adaptive smart antennas, in order to investigate the potential gains available and the impediments to widespread adoption. The work undertaken has considered a range of wireless systems to determine those for which adaptive smart antennas are most suited, and those for which alternative approaches would be more appropriate. A number of general conclusions have been drawn from this, in particular, that adaptive smart antennas are best employed in relatively low multipath, interference limited environments, where their ability to direct both beam and nulls give the greatest system benefits.

Adaptive smart antennas have been trialled and implemented commercially, but usually within large infrastructure systems, such as mobile telephone basestations. Even here, the physical size and cost of the antenna systems are clear concerns and tend to:

A consequence of a small antenna is that it would only be able to produce a relatively broad beam and nulls. The number of array elements also limits the number of nulls that may be independently steered towards interfering sources.

A prototype IEEE802.11a wireless LAN has been constructed to understand the benefits a smart antenna approach might bring when antenna size is limited. Here using an adaptive antenna with beam steering would improve the range, encouraging more usage, and relieving the congested 2.4GHz band. As the number of users increases, interference would be controlled by the null steering capability.

Initial estimates suggest that providing the additional functionality would add a few dollars to the cost of the chipset in production. The demonstrator employs an array of four elements, each being connected to a downconverter and I/Q detection stage. The type of element and array geometry may be chosen to suit the installation. At present a square array of dipole elements is used, providing 360 coverage. The adaptation is performed by applying phase and amplitude weighting to minimize the errors in known training data. 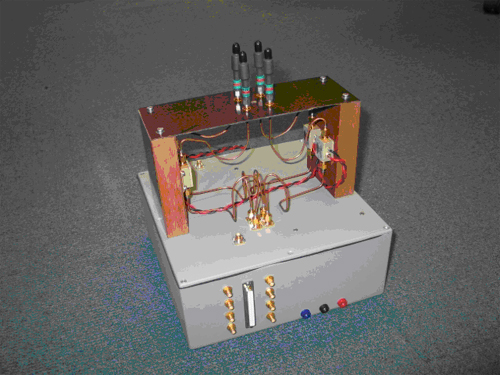 As discussed above, there are many difficulties still facing the deployment of smart antennas. Because of this Ofcom is also supporting investigations into a different approach which promises to bring some of the benefits but with a reduced complexity. The approach is based around using the antenna to optimise sectored coverage rather than developing a narrow steerable beam.

This approach is of much lower complexity than conventional smart antennas and has a minimal impact on the cellular system architecture. The term semi-smart antenna has been coined to denote its inherent low complexity. The basic idea behind the proposed load balancing scheme is to shape cellular coverage according to the traffic needs. The traffic demand of the heavily loaded cell is decreased to match the available capacity by contracting the radiation pattern around the area of the peak traffic, while adjacent cells expand their radiation patterns to compensate for coverage loss as shown in Figure 5. Semi-smart antennas provide the required coverage shaping capability.

Future mobile communications systems are likely to demand much greater capacity. This must be delivered in a highly congested area of the radio spectrum. With many systems running close to their theoretical limits on performance, utilizing the capabilities of smart antennas offers the prospect of performance improvements without placing more demands on the spectrum.

Both projects are now complete and you can download the final reports below.

The communications sector at a glance

Facts and statistics on the communications industry, taken from Ofcom's research publications.

Radio spectrum and the law

In the UK the use of any radio transmitting device is required to be either licensed or specifically exempted from licensing under the Wireless Telegraphy Act 2006. Find out more about radio spectrum and the law.

The extent to which broadcast television channels and on-demand programme services (ODPS) carried access services in 2021.

You can use this page to see which ADR scheme your provider belongs to.