Adam Baxter, Director, Standards and Audience Protection, looks back at a record year for television and radio complaints.

For those of you old enough to remember, nobody on TV better immortalised the art of complaining than One Foot in the Grave’s Victor Meldrew. [For those too young – check out his most memorable moans on YouTube.]

And while we can poke fun at Brits delighting in day-to-day grumbles about everything from the weather to traffic jams, complaints from viewers and listeners serve a vital purpose for us at Ofcom. They help alert us to genuine concerns about what people see and hear.

2021 has been a record year for TV and radio complaints to our broadcasting standards team. They’ve topped 150,000 – an increase of 124% on last year. This does not include complaints about the BBC, which are handled by the BBC in the first instance.

So why are complaints on the increase? Well interestingly, it’s a relatively small number of TV shows driving the lion’s share; the top five most-complained about programmes account for 80% of all complaints. Social media – a digital home for modern-day water-cooler conversations – also has its influence on complaints figures. But for me, these volumes demonstrate the British public’s interest and passion for TV and radio programmes, and shows just how important they are to the cultural fabric of our nation.

People rightly expect certain standards on TV and radio – and that means having their say when they come across something that troubles them. That’s where we come in. Our team of content experts assess each and every complaint made to us – collectively watching or listening to thousands of hours of footage and audio.

High numbers of complaints don’t automatically mean our rules have been broken. And there is no absolute right not to be offended by things we see and hear on TV and radio. Consistent with the right to freedom of expression, broadcasters can include potentially offensive material in their programmes, providing they put it into context and provide adequate protection to audiences.

The judgments we make each day are often finely balanced – such as our highest profile case this year: Piers Morgan’s comments on Good Morning Britain in the wake of the Duke and Duchess of Sussex’s interview with Oprah Winfrey. But, given the importance of the right to freedom of expression, we only step in or take action against a broadcaster when we consider it necessary. This year we concluded 33 investigations and recorded 20 breaches of our rules. Many of these cases were about hate speech or harmful, scientifically unfounded Coronavirus misinformation.

As well as being a busy time for complaints, 2021 has also been an important year for developing our rules. Audiences’ tastes and tolerances change over time, so, our ‘deep-dive’ research helps ensure our rules and guidance for broadcasters remain relevant and effective.

Separately, we also spoke to people from minority ethnic backgrounds about their expectations of TV channels and radio stations that serve them and their communities. Viewers told us these services provided a sense of belonging and connection with their cultural roots, and an important shared family viewing experience. But we also heard unease around certain content, including violence or graphic news programmes; depictions of violence and domestic abuse; sexualised material; and content that had the potential to damage community cohesion. All these findings are extremely useful for broadcasters’ editorial decision making, and to inform Ofcom’s judgments on behalf of audiences.

This year we have also strengthened our rules having listened to viewers concerns about the wellbeing of people taking part in programmes. In April, we introduced stronger protections in this area: broadcasters now have to take due care of people they feature in their programmes who might be at risk of significant harm, such as vulnerable people or those who aren’t used to being in the public eye.

Before someone agrees to take part in a TV or radio show, broadcasters must tell them about any possible risks to their welfare, and how they’ll seek to minimise them. And it should also be made clear to viewers how the programme is taking care of the people they feature.

So it’s been an important year for Ofcom’s broadcasting standards team– and I’ve seen nearly 14 of them! Viewers and listeners will always remain at the heart of what we do. Even if you may not always agree with the decisions we make over the next 12 months, you can trust that we will consider every complaint carefully, following the evidence, and continue to protect audiences from harm and uphold freedom of expression on the UK’s airwaves. 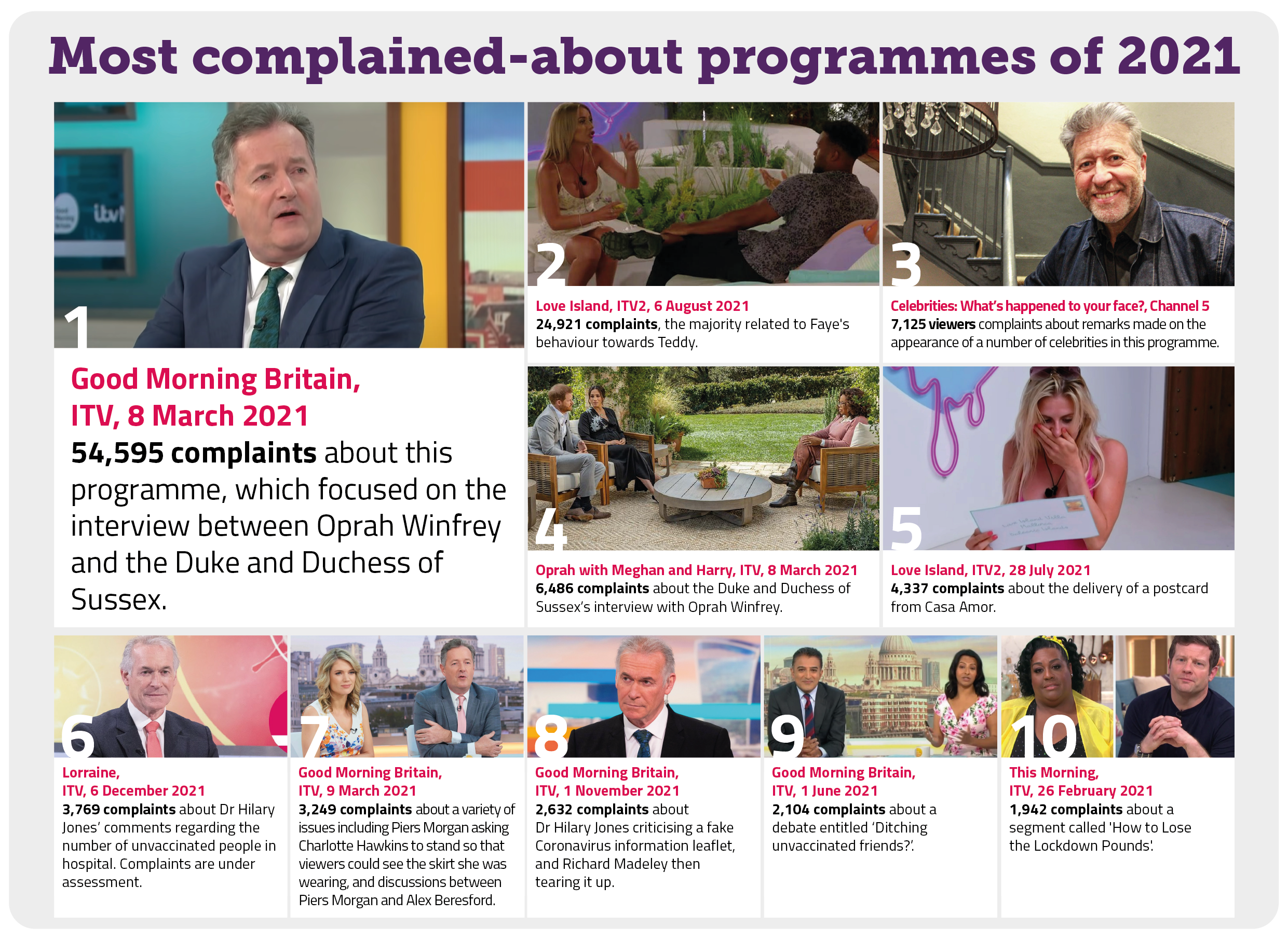