Teenagers in the UK are turning away from traditional news channels and are instead looking to Instagram, TikTok and YouTube to keep up to date, Ofcom has found.

Ofcom’s News consumption in the UK 2021/22 report shows that, for the first time, Instagram is the most popular news source among teenagers used by nearly three in ten in 2022 (29%). TikTok and YouTube follow closely behind, used by 28% of youngsters to follow news. 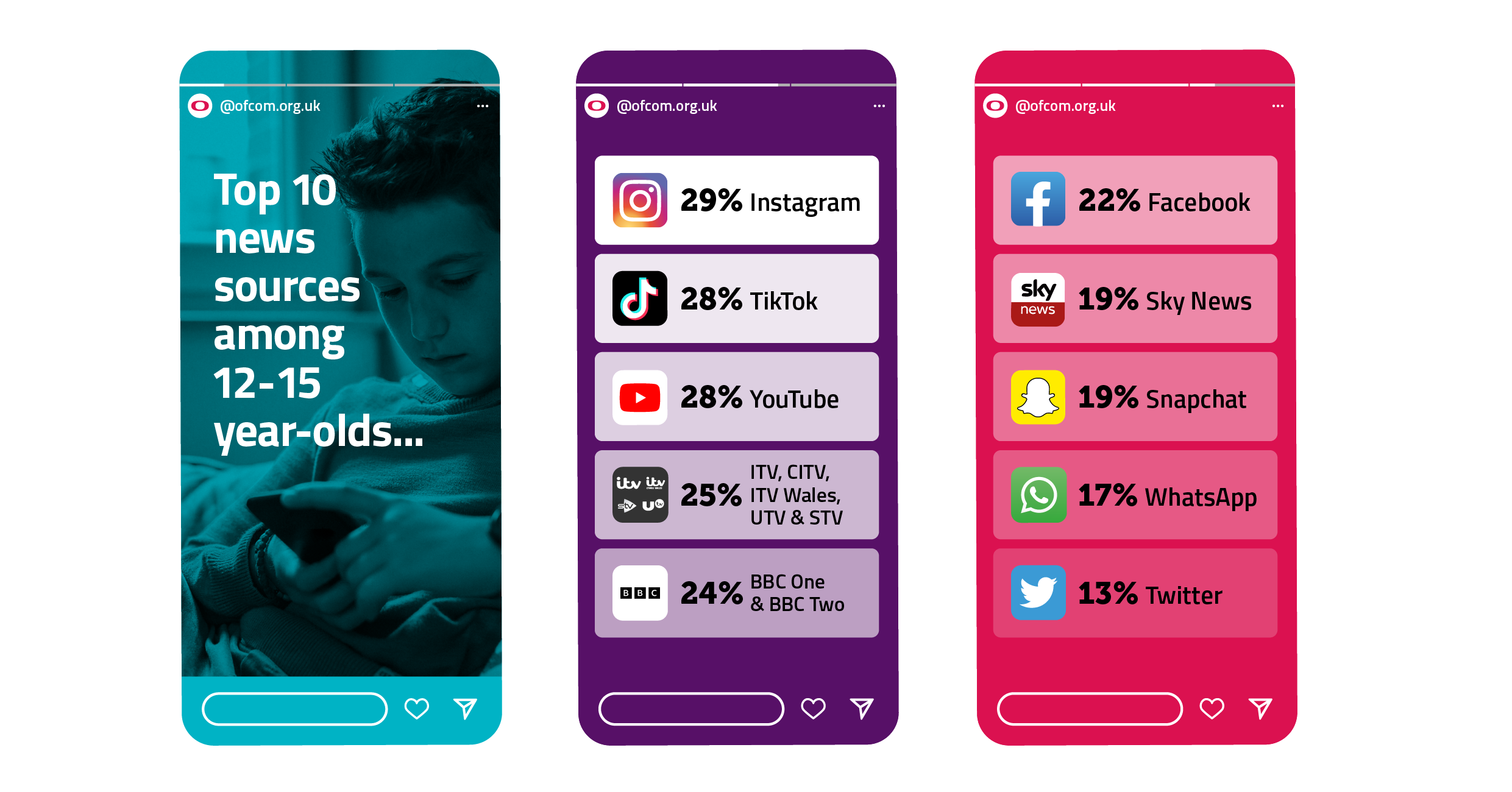 BBC One and BBC Two – historically the most popular news sources among teens – have been knocked off top spot down to fifth place. Around a quarter of teens (24%) use these channels for news in 2022, compared to nearly half (45%) just five years ago.1

BBC One remains the most used news source among all online adults, although it is one of several major TV news channels to reach fewer people in 2022.2 News viewing to BBC One, BBC Two, BBC News channel, ITV and Sky News is now below pre-pandemic levels, resuming a longer-term decline in traditional TV news viewing.

TikTok’s growth is primarily driven by younger age groups, with half of its news users aged 16 to 24. Users of TikTok for news claim to get more of their news on the platform from ‘other people they follow’ (44%) than ‘news organisations’ (24%).4

Teenagers today are increasingly unlikely to pick up a newspaper or tune into TV News, instead preferring to keep up-to-date by scrolling through their social feeds.

And while youngsters find news on social media to be less reliable, they rate these services more highly for serving up a range of opinions on the day’s topical stories.

Yih-Choung Teh, Ofcom’s Group Director for Strategy and Research

TV news remains the most trusted news source among UK adults (71%), with news on social media considered the least reliable (35%). CNN (83%) and Sky News (75%) are highly trusted by their viewers for news, while the public service broadcasters are also trusted by the majority of their viewers – BBC (73%), ITV (70%), Channel 4 (66%) and Channel 5 (59%). Sixty-seven per cent of newcomer GB News's viewers trust its news reporting.

Among teens, half of YouTube and Twitter users think they provide trustworthy news stories (51% and 52% respectively). Despite its popularity for news, fewer than a third of youngsters (30%) trust TikTok’s news content.

This is being driven by the substantial decrease of print newspaper reach in recent years, with the trend seen pre-pandemic appearing to accelerate, likely exacerbated by the pandemic. Less than a quarter (24%) of UK adults use print newspapers for news in 2022, compared with more than a third (35%) in 2020, and two in five (40%) in 2018. Use of newspapers among teenagers fell from 19% to 13% in the last five years.

Sign up to receive our monthly newsletter straight to your inbox. Each month we'll send you our latest round-up of news, information and advice.