Ofcom’s duty in post is to carry out its functions in a way that it considers will secure the provision of a universal postal service.

The minimum scope that the universal postal service must cover (such as six-day a week delivery for letters, and geographically uniform prices across the UK) is set by Parliament in statute, and can only be changed by Parliament. Ofcom has designated Royal Mail as the provider of the universal service.

When we took over regulation of post in October 2011, we conducted a fundamental review of the regulatory framework, in light of the fact that the sustainability of the universal service had come under severe pressure, and that Royal Mail’s financial position at the time was weak. We considered Royal Mail needed greater commercial freedom to compete, and so removed the vast majority of price regulation, retaining only a simple price cap on second class letters, large letters and parcels less than 2kg to protect vulnerable consumers and ensure a basic universal service is available to all.

At the same time we noted the need for the provision of the universal service to become efficient.

In response to the changes we introduced, Royal Mail substantially increased its prices, as we had anticipated it would. This has significantly improved its financial position. In 2010/11, the Reported Business (i.e. the universal service network) EBIT after transformation costs was (£247m); in 2013/14 it was £218m.(-1-) Royal Mail now makes a profit from universal service products, they are VAT exempt which gives them a competitive advantage over competitors, and Royal Mail has made submissions to Ofcom to ensure products which make up the universal service remain unchanged.(-2-)

One important feature of our monitoring is to assess on an ongoing basis the impact of entry into the letter delivery market by Whistl (formerly TNT Post), known as “end-to-end” competition. Whistl commenced delivery services of “bulk mail” letters(-3-), on a trial basis, in April 2012 in west London, and has since rolled out similar services in central, south west and north west London, Manchester and Liverpool.

Ofcom has general duties to promote competition where appropriate, which apply to its regulation of postal services. Where we consider there is a conflict between these duties, we have to give priority to securing the universal postal service.

We are therefore concerned to ensure that Royal Mail continues to be in a position to provide the universal service alongside such competition, and we have published a number of separate reviews since April 2012, each time concluding on the evidence that the provision of the universal service was secure and that we did not think it necessary to intervene to impose regulation to limit end-to-end competition at that time.(-4-)

In June 2014, Royal Mail made a detailed submission to Ofcom in which it effectively urged Ofcom to impose regulation on Whistl (in the form of particular regulatory conditions known as general universal service conditions) on the basis that competition from Whistl posed a serious threat to its ability to provide the universal service. Royal Mail argued, amongst other things, that Whistl is unfairly cherry picking high-density, low-cost areas in which to provide end-to-end competition (such as London), leaving Royal Mail to deliver in the remaining unprofitable areas and unwinding the cross-subsidies needed to support the universal service. Royal Mail also argued that its universal service obligations put it at a competitive disadvantage relative to an entrant because it is required to deliver six days per week whereas an entrant faces no such requirement.

In order for us to impose such conditions, we have to be satisfied that the obligations they contain are necessary for securing the provision of a universal postal service. In order to find that it was necessary to impose such conditions in response to end-to-end competition to Royal Mail, we consider that we would need to be able to show a causal relationship between competition from Whistl and a finding that Royal Mail was not able to provide the universal service in a financially sustainable manner. 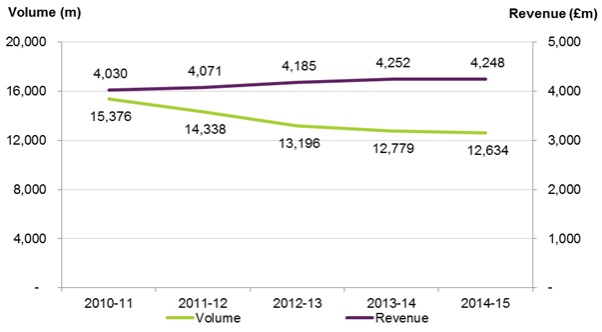 With regard to Royal Mail’s views on Whistl only targeting urban areas for delivery, we note that high density areas are not necessarily low cost for Royal Mail. London, where Whistl began its operations, is the most expensive of Royal Mail’s zones for delivery services (due largely to labour costs). Royal Mail’s London zone also covers fewer delivery points / addresses than any other zone.

We also do not consider that entry on a selective geographic basis represents ‘unfair competition’. Royal Mail has the freedom to charge operators who use its services on a selective geographic basis a higher amount for delivering their post in areas with higher costs. This is called zonal access pricing and ensures Whistl is unable to gain an artificial competitive advantage by rolling out in selected geographic areas only. Instead, zonal access pricing means Whistl must have a genuine source of competitive advantage over Royal Mail in the areas it chooses to enter, either in terms of the cost of self-supplying delivery, the mark-up it is prepared to accept on its own delivery services or both.

We consider Royal Mail’s real concern appears to be the loss of volumes, not the loss of cross-subsidies. Its delivery network is characterised by a significant proportion of fixed costs so the average cost of delivering universal service mail increases when volumes fall. This effect is not linked to selective geographic entry as it would occur even if entry was on a national basis.  It could also occur for a variety of reasons other than end-to-end competition, including e-substitution and competition in parcels.

We do not agree the universal service obligation places Royal Mail at a cost disadvantage relative to an entrant in bulk mail delivery.  Royal Mail is not subject to any minimum standard requirements in bulk mail and so could choose to deliver bulk mail at any frequency that was commercially attractive to it.

In light of the evidence, our assessment is that Royal Mail’s ability to provide the universal service in a financially sustainable way is not threatened from end-to-end competition at this point in time. Ofcom is today publishing the outcome of its review on end-to-end competition in this regard. Our current position does not mean that Ofcom will not intervene in the future, should we consider it necessary to do so in light of emerging evidence. We estimate that a General Universal Service Condition could be put in place within six to nine months.

For more information, please see the review of end-to-end competition in the postal sector.

Wider factors affect the provision of the universal service

There is a wider set of issues beyond end-to-end competition that affect both the financial sustainability and the efficiency of the provision of the universal service. Of particular importance are, in our view, Royal Mail’s own efficiency in providing the service and Royal Mail’s performance in the parcels market in which it is facing increasing competition.

These factors could potentially significantly outweigh the current and likely future effects of end-to-end competition in bulk mail on Royal Mail’s ability to provide the universal service, and it is important that Ofcom understands these effects in order to secure the universal service in accordance with our duty.

Ofcom is therefore today announcing that it will review these factors over the next year.

Access competition, where competitors to Royal Mail contract with it to deliver bulk mail that they have collected, sorted and transported to Royal Mail’s inward mail centres, accounts for nearly 50% of total market volumes in the UK (in 2013/14). As delivery remains the largest proportion of the operational cost base, Royal Mail retains around 90% of the total revenues generated in the bulk mail market (£1.5 billion of access revenues in 2013/14), with competitors keeping the remaining revenues (£160 million in 2013/14). Royal Mail makes a profit on providing access services.

In order for access competition to work effectively, it is important that Royal Mail’s prices for access to its delivery network are appropriately set.

Royal Mail proposed a number of significant changes to its access prices in January 2014. We were concerned that these prices could have adversely affected operators who also compete with Royal Mail in delivery services. In order to ensure that access prices are appropriately set in the future, Ofcom is today proposing a number of changes to the regulation of Royal Mail’s access pricing. For more information, please see the Royal Mail Access Pricing Review – Proposed amendments to the regulatory framework consultation.

In addition, we are currently investigating whether those proposed prices were unlawful and in breach of the Competition Act 1998.(-7-)

The postal market is changing rapidly as the needs of consumers and businesses evolve. Letter volumes are in structural decline, while parcel volumes are growing as larger numbers of consumers purchase more items online. New entrants are changing the competitive dynamics of these markets, whether this is Whistl in the bulk mail market or the growth of competition for parcels sent by consumers. In these circumstances Ofcom will continue to monitor the developments in the market closely, being alert to the potential consequences of competition for the universal postal service and ensure that the universal postal service remains appropriate and relevant for the needs of consumers and businesses in the future.

3.- Bulk mail is commercial mail which is sent in bulk by a business (for example a bank) to many recipients. It does not include mail sent by individuals. Bulk mail is not in the universal service; as such, neither Royal Mail, not its competitors, are subject to quality of service targets in relation to its delivery.

7.- Behaviour that is found to infringe the Competition Act 1998 is unlawful and Ofcom has powers to impose fines of up to 10% of a company’s relevant turnover where it finds an infringement.