What is the watershed? 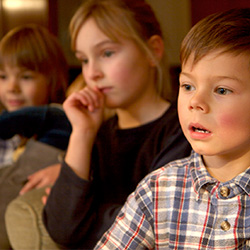 Protecting children from harmful material on TV and radio is one of Ofcom’s most important duties.

Our Broadcasting Code sets standards for television and radio shows and broadcasters must follow its rules.

There are strict rules about what can be shown on TV before the 9pm watershed. But what exactly is the watershed and how does it work?

The watershed means the time when TV programmes which might be unsuitable for children can be broadcast.

The watershed begins at 9pm and material unsuitable for children should not, in general, be shown before 9pm or after 5.30am.

Unsuitable material can include everything from sexual content to violence, graphic or distressing imagery and swearing. For example, the most offensive language must not be broadcast before the watershed on TV or, on radio, when children are particularly likely to be listening. Frequent use of offensive language must be avoided before the watershed, and must always be justified by its context.

No. The transition to more adult material must not be unduly abrupt and the strongest material should appear later in the evening. But even then Ofcom’s rules protect viewers from offensive and harmful content.

Since 2003 Ofcom has taken action on more than 300 occasions when broadcasters have scheduled unsuitable content before or immediately after the watershed. In a number of cases, inappropriate music videos were shown early in the afternoon.

The watershed continues to help parents protect their children from material that might be unsuitable or even harmful for them. Twice a year, every year, we ask parents and the wider general public what they think about standards on TV. Almost everyone (93 per cent) understands the watershed and 74 per cent think 9pm is the right time. If you just ask parents, that number rises to 76 per cent.