UK talks for longer during lockdown

Time spent on mobile calls in the UK rose significantly this year, as people turned to their phones to keep in touch with loved ones and work from home.

Our second Mobile Matters report looks at how around 200,000 people used their Android mobile phones between January and April this year, revealing how people make calls and get online on the move.

The report reveals marked differences in how people used their phones before and during the initial Covid-19 lockdown period.

The average mobile call in the initial weeks of lockdown lasted around five and a half minutes – nearly two minutes more than before the social and working restrictions began. 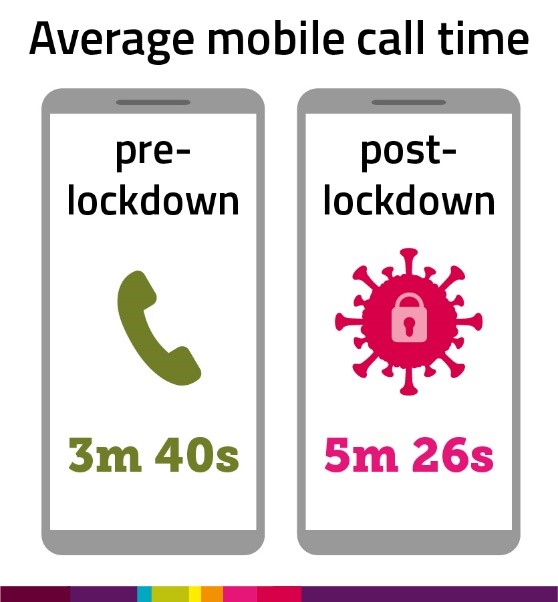 But more generally, many people are not using their mobile for calls at all. Our data shows that more than one in five people (22%) did not make or receive a single call on their mobile network in the first 11 weeks of the year. This can in part be explained by the rise of communications services such as WhatsApp and Zoom, whether for calls, instant messaging or group video calls.

The proportion of people not making calls did not change between pre- and post-lockdown, suggesting some people have a preference for using different services to communicate.

The coronavirus also changed where people used their mobile phone. Mobile activity in the centres of the UK’s capital cities fell dramatically at the start of lockdown, as people headed away from offices to work from home.

Our research also shows how some people used the initial lockdown period to take the chance to go outside and enjoy the quieter, greener parts of their areas. For example, we saw increases in mobile activity in parts of London’s Richmond Park, Blackford Hill in Edinburgh, Sir Thomas and Lady Dixon Park near Belfast, and the Welsh coastal hamlet of Lavernock.

Staying in touch has never been more important and our analysis paints a fascinating picture of how people moved around and used their phones during lockdown. People spent much longer talking on their phones and while city centres were much quieter than before, green spaces across the UK had much higher phone use.

Our data also shows that for the large majority of the time people were able to connect to high speed 4G networks.

Advice on improving your mobile reception is available from the Ofcom website.